Boston has a lot of history and a lot to do - the city played a very important role in developing colonial America to what it is today. I like to think of Boston as a more laid-back version of New York City, with a smaller population density and not as crowded. Overall, Boston is a city I enjoyed very much! I've been here a few times but I never had the chance to fully explore the city until August 2017. My first time here was to tour Northeastern University (beautiful campus by the way, it's worth a visit!), and my second time was when I was working for Best Delegate (a Model United Nations summer program for middle/high school kids) at Harvard Law School. I only had a few days to see the city, but nevertheless I had a wonderful time while I was here!

When I planned my trip, I combined New York City and Boston for a week. My itinerary involved me landing at Boston first and then taking the train to New York City.

Landing at Logan Airport was one of the better experiences I've had at airports. There are lots of transportation options to take you to the city center, such as a taxi, shuttle bus, or Uber. However, what I did (and recommend) is to take the Massport Shuttle to the Airport MBTA Station, where then you can use the T to get to the city center. At the Airport Station, I bought an unlimited 7-day pass, which was actually cheaper than paying point-by-point for the days I was actually in Boston! You'll have to do the math yourself to see if it's cost effective for you.

I had a few hours to kill before my train at South Station, so I decided to go to Faneuil Hall, which is a marketplace where they sell lots of great seafood. There were a lot of options in terms of lobster rolls and clam chowder! I didn't know what to get because there were so many options. I ended up getting haddock pie, which was very tasty. Then, I just sat outside the marketplace and people-watched for a while - there's a lot of people at Faneuil Hall so it was definitely a nice way to pass the time. Also, there are stalls outside the market selling various trinkets and clothing.

It was almost time for my train, so I took the T to South Station where I kept an eye on the huge information board that displays all the trains and what platform they will depart from. Keep a careful eye on when your train actually arrives, because you don't want to miss your train! Once I got on the train, it was actually nicer than I expected - Amtrak is usually a mess here on the West Coast, but on the East Coast it's a well-oiled machine. It might have helped that I was taking the Northeast Corridor, which is a popular commuter train route. My seat was spacious, and no one was sitting next to me so I had extra room to set my stuff aside. There was also free Wi-Fi, which worked well but not enough if you want to stream a video. My train was late in the day so I didn't have the chance to enjoy the view, but I think that it would have been very nice during the day. I got off at New York City's Penn Station, where I stayed there for a few days before heading back to Boston.

To get to Boston, I was scheduled to take another Amtrak train but I missed the train by mere minutes! This was because I accidentally got on a subway train heading in the wrong direction, costing me minutes. However, I was able to get a voucher for a future ride, and I was able to book a bus (Megabus) to Boston departing an hour later. Therefore, I rushed to the meeting point on my confirmation email, which was near the Port Authority Bus Terminal. One thing that's important to know is that there may be multiple buses departing at the same time, so make sure that you're waiting in the right line.

After a 5 hour bus ride, I finally got to Boston around mid-day. Therefore, I had to shorten my itinerary and started to make my way towards Boston Common. On the way, I walked on part of the Freedom Trail which was cool! I stopped at Beacon Hill along the way. However, what truly blew me away was park itself. To me, coming in the evening was a perfect way to experience the park. During my walk, I saw some live music and lots of families and couples walking about - definitely a great experience! 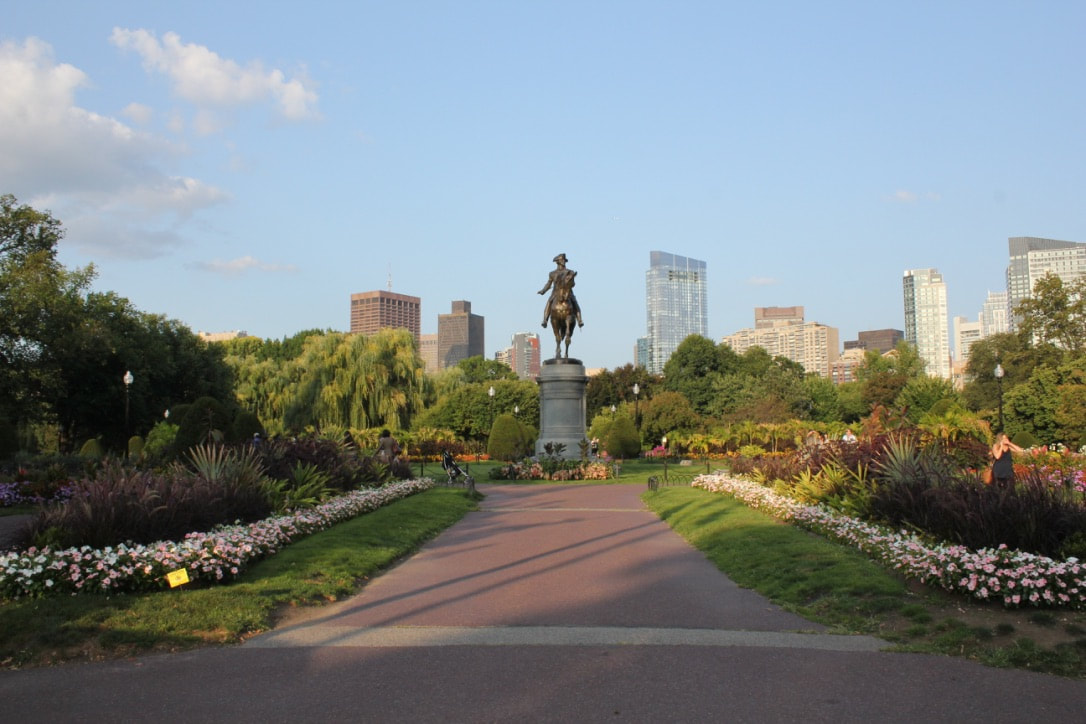 While I was walking in the park, I was able to take a glimpse at the Boston Public Gardens, which were truly beautiful. I got a lot of great pictures, and the lighting was perfect. Then, I made my towards Suishaya in Chinatown for dinner, which was quite tasty. I was craving Asian food, so I got a tofu bowl which was very good! After dinner, I went back to my Airbnb to get some rest for the next day. 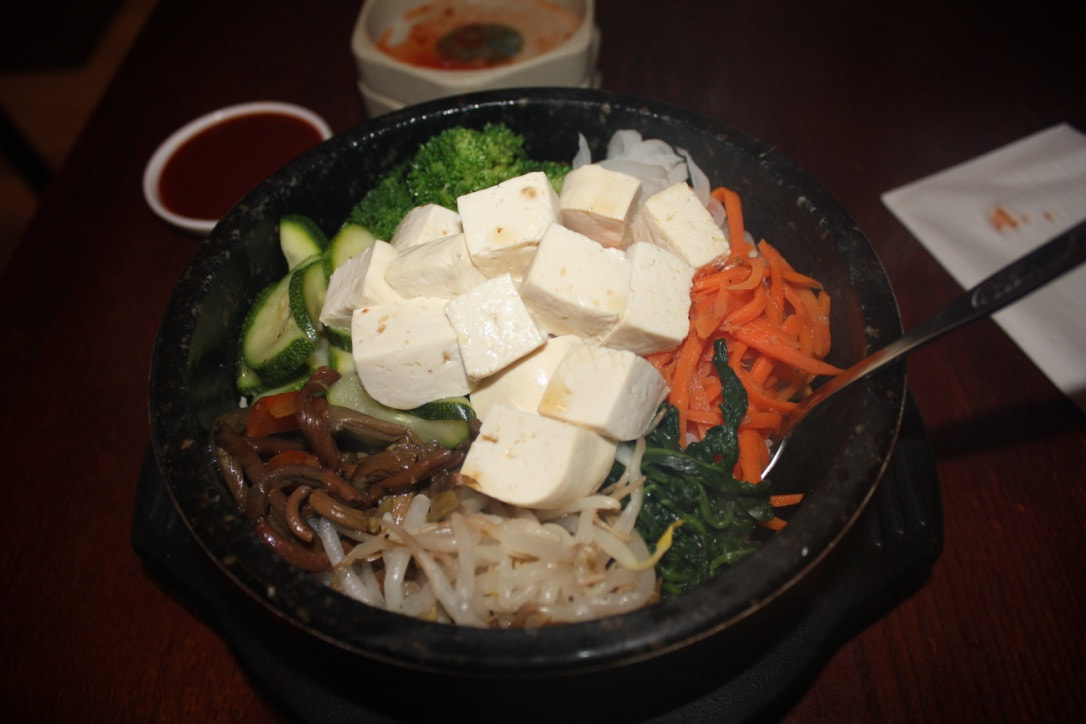 I started off the day by heading towards the Boston National Historical Park to see the Bunker Hill Monument. I was able to see a partial reenactment of something that I can't remember, but it was a very cool experience! Then, climbing the monument itself was quite the challenge (lots of stairs in a narrow corridor) but it turned out to be worth it because the view of Boston at this vantage point was absolutely amazing. 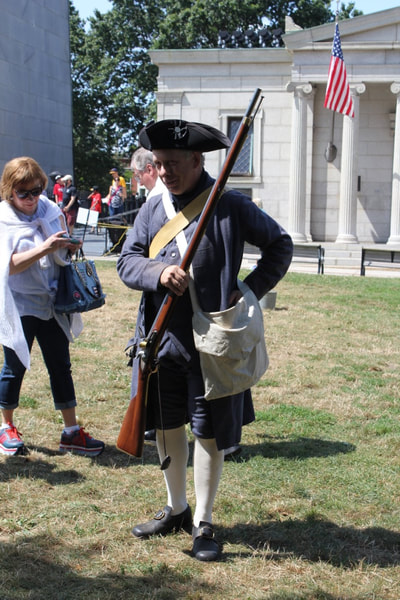 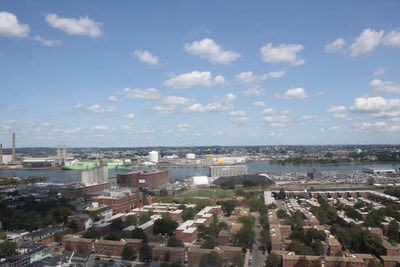 After the monument, I went to see the Boston Public Library. I'm a huge fan of libraries, so seeing this library was almost a dream come true. Lots of study spaces, comfortable chairs, and a great atmosphere. I wished there was something like this near UCSB. But unfortunately, you can't have everything in life. After the library, I went to the Cambridge Antique Market. This was a very interesting experience as the place was filled to the brim with any antique you could imagine. I was tempted to buy something but I couldn't because I didn't have enough luggage space.

For dinner, I met up with a high school friend at Eataly, which is an amazing Italian restaurant. I'm so happy they have a place open in SoCal now, because eating there was almost comparable to pasta I've had in Rome. It was very delicious and I would definitely go again. After dinner, I was pretty beat from a whole day of exploring so I went back to my Airbnb to get some rest.

To start off the day, I went to the area around Harvard University, starting at Harvard Square. This is a very cute area near the campus and you could see that new restaurants have opened and it just has a very youthful vibe. Lots of hip eateries and shops line the streets as you could see Harvard students, tourists, and locals milling around.

When you get onto the campus itself, it is absolutely stunning. It doesn't feel like you're in a city at all, and all the architecture looks very historical. To me, it felt like something out of colonial America, only more modern. There were a lot of parents and students sitting at Harvard Yard, and the campus seemed filled with life. I had previously bought a to-go lunch at a local vegetarian place, so I walked towards the library and sat on the steps to eat. During my travels, I've noticed that East Coast colleges have a different vibe than the UC campuses I'm accustomed to.

After I finished eating my lunch, it turned out that Harvard was running some sort of freshman orientation activity! The entire freshman class was divided into their houses and competed in some fun, friendly games organized by some orientation staff (I think). The activities started to attract a lot of attention from tourists (including me) and I got somewhat nostalgic of my days from freshman year. 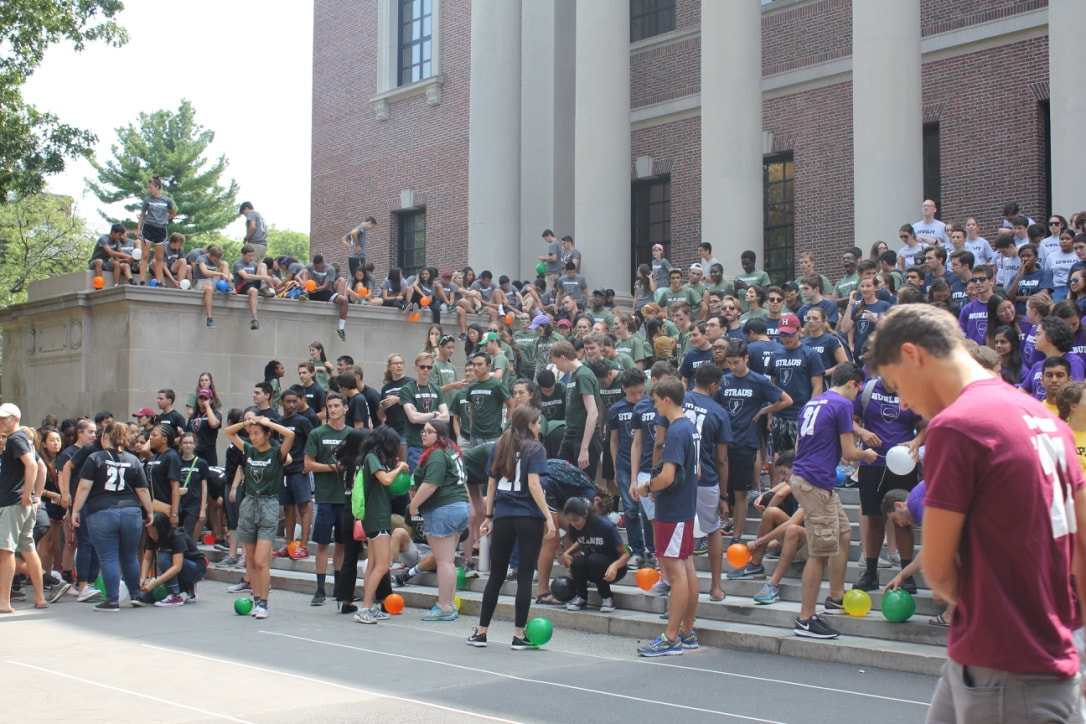 After watching the spectacle for an hour, I explored Harvard a little more and then I headed to the Cambridge Public Library, where it was a little small but charming - again, I wished these libraries existed anywhere near UCSB! Then, I went to Zinneken's Belgian Waffles for a snack because a friend recommended it to me. I got a fruit type of waffle and it was one of the best waffles I've ever tasted. It seemed to be family owned, and it had a great atmosphere to it. It was definitely one of the better things I've ate in Boston so far.

After eating the waffles, I started to walk towards Harvard Business School and the MIT Sloan School of Management. I wanted to take a look at these places because I hope to get an MBA some day, Then, I walked along the Charles River Esplanade which was easily one of the highlights of the day. While I was walking along the Charles River, I had the chance to see cyclists, joggers, and people just taking a leisurely stroll. I began to picture myself living in Boston and taking this exact walk daily, it was just that wonderful! In the middle of walking, I decided to take a rest and just take in the river and everything it presented and it was very relaxing. 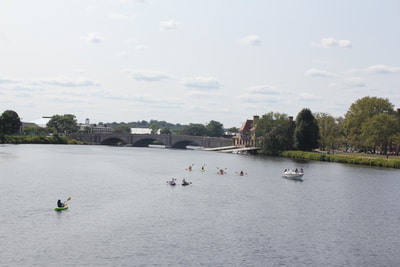 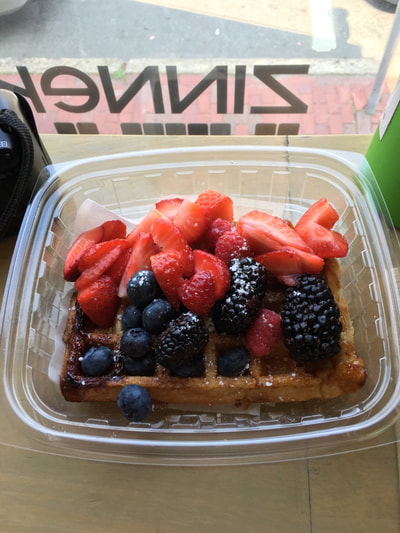 I slowly made my way towards the Garment District, where I was in awe of all the clothes that you could possibly buy - everything was pretty cheap! This was when I regretted not bringing a suitcase with me on this vacation. I ended up buying a nice J. Cole coat and a few long-sleeve shirts all for around $45, which is not bad!

Another part of the Garment District that was pretty cool was that they have a huge area with clothes on the ground, and then you can pick out anything you like and you pay by the pound for an absurdly cheap rate. I decided to look around myself, and spent more time than I thought I would. I found some very interesting items, but there wasn't a lot of men's options. After rummaging for a while, I decided to make my way back to my Airbnb since I had to catch an early flight the next day.

Overall, Boston was a city that I enjoyed getting to know very much. I feel that there's so much you can do that you can't cover in only 3 days. I definitely wanted to do more, and I'll definitely be back - until next time, Boston!
Proudly powered by Weebly