Edinburgh is a city with lots of historical charm, but yet has a cosmopolitan vibe - it's a very easy city to fall in love with. The city is old yet new at the same time. I can't really explain it. During my study abroad program in London, I was able to go to Edinburgh for the weekend with a few of my friends. It was an amazing experience that I would want to do again. Scotland captured my attention, as I hope to visit the city again one day.

In order to get to Edinburgh, my friends and I took the train through Virgin Trains. They have trains going all over the UK, and the train ride only took about 5 hours, give or take. The trains are very comfortable and was very reasonably priced. We got to Edinburgh past midnight and walked to our Airbnb near New Town, where we slept for a few hours before getting up early for a jam-packed day.

The day began at 5AM, as we all got up to go to Arthur's Seat to watch the sunrise. The hike was a little intense (probably because we were sleep-deprived) and cold. We stopped to rest and take pictures several times, but we eventually made it to one of the high points. We didn't exactly reach Arthur's Seat because we got lost (but A for effort, right?). But, the view and the sunrise were absolutely beautiful, which made getting up at an ungodly hour worth it. We sat there for a good while and took everything in, and then went back down to our next destination. 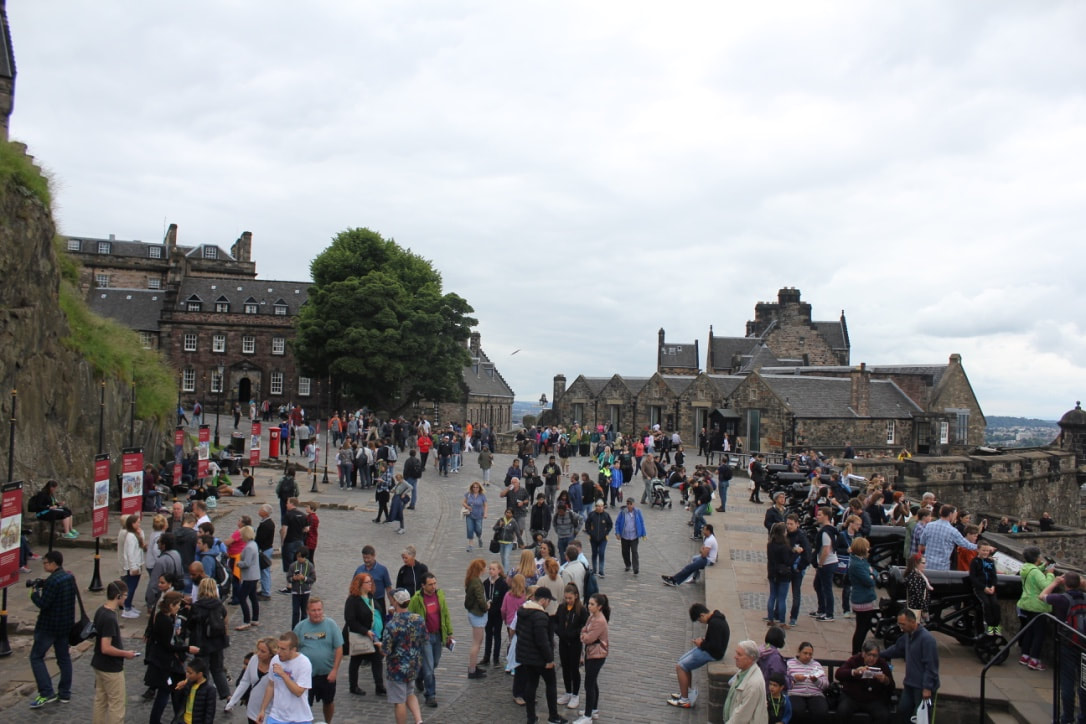 Our next stop was Edinburgh Castle, which was a very cool experience. But before that, we ate breakfast at Tani Modi. At the castle, there were organized tours available, but my friends and I skipped on that because we just wanted to explore. If you're into history, the castle has lots of it, as well as lots of people! There's a few points where you can have an amazing view of the city. It was absolutely breathtaking.

After the castle, we made our way towards Scott's Monument. But first, we made a stop for gelato even though it was kind of cold. Scott's Monument is somewhat similar to Bunker Hill Monument in Boston, where you have to walk up a very narrow flight of stairs to the top. I would say that this isn't a must-do, but it's cool to see the monument itself. If you do go up, the views again are stunning - you could see the entire city center in all directions!

At this point, it was close to dinner time and my friends and I were very hungry. We had a hard time finding a place that would take such a big group of us. To tide us over until we got actual dinner, a few of my friends and I ate at Oink, which serves a fantastic pulled pork sandwich. The menu is simple, but it was very good and hit the spot. A moment later, the rest of my friends gave up and we all just ended up eating there. Then, we headed to Portobello Beach. Looking back, the evening time was not the best time to visit the beach, but my friends and I had fun with the beach all to ourselves. It had a mysterious feeling at night, but the water was calm - overall, I would visit again during the day. After that, we went back to our Airbnb for another adventure the next day.

Calton Hill required a little hiking, but not as intense as Arthur's Seat. There were a lot of interesting structures and places to get a nice view of the city. My friends and I had a good time climbing the structures - looking back, it was dangerous because it was raining. But, I feel that if it was a sunny day, the view would have been stunning.

After the hill, we had to catch our train back to London. It was way too short of a visit, and Scotland is one of the places I look forward to visiting more of in the future!