When I was planning this trip, I had never thought that I would never visit the Middle East. However, when I was booking my ticket from Europe to Asia, I saw that I could have a layover in Doha and I jumped on the chance to extend it so I could explore a new place. I thought Doha was an incredibly unique place to visit that had lots of history. If you get the chance to go, I would definitely do it.

​However, I would never visit again during the summer months - it was simply just too hot. It was above 100 degrees Fahrenheit for more than half the day, and I was constantly sweating. I was pretty sure I got a shade darker when I was there, and I’m a pretty dark-skinned person already. The weather was a big part of the reason why I wasn’t able to explore Doha more.

My flight from Copenhagen landed at Hamad International Airport at around 5:40am. Once we got off the plane, all I could notice was how hot it was at 5:40am! We got on buses that took us to the terminal. I passed through immigration and customs, and then I was off in Doha!

Another thing I noticed as I was going through the airport was how nice it was. Everything was very clean, user-friendly, and the airport was tastefully decorated. What boggled me was how they could build such a nice airport in the middle of the desert, but yet LAX is still slightly subpar.

Public transportation in Doha seemed easy enough to use - however, I ended up sticking with using Ubers for the day because of the hot weather. I usually never take Uber as a form of transportation because it’s usually so expensive. However, in Doha, Uber is actually very reasonably priced! I was able to get all around the city for around $30 for the whole day.

For my backpack, I decided to do something a little risky by trying to repeat a past experience. When I was in Chicago, I left my bag at the Marriott hotel with the concierge for the day and they never asked me if I was a guest. So, I decided to try to emulate that here. I took an Uber to the Marriott closest to the airport, and then I asked the concierge if I could leave my bag for the day and come back later. I had to pretend to seem like I was going to check in later, but in reality I never had a reservation. They ended up taking my bag and giving me a slip to return later! The plan worked flawlessly so far.
​
After leaving my bag, I took an Uber to the Katana Cultural Center. My driver dropped me off, but I was surprised to see no one was there. The only people I saw were construction workers. Thus, I started to walk around and take pictures and such - the buildings are pretty cool and have a distinct Middle Eastern style. However, after around an hour of walking, I finally figured out why I didn’t see anyone - it was simply too hot to be walking around. At that point, it was around 9am and reaching 110 degrees. So, my new plan was to take an Uber to the Islamic Museum of Art and stay there until it became cooler, because the heat was getting to me.
Once my Uber driver dropped me off at the museum, I couldn’t help but notice how the museum was built like. It was nothing like I’ve seen before, and the architecture was just so unique! I went inside and got a blast of AC, which was something I greatly needed. I went through a small security check and got a map from the front desk. 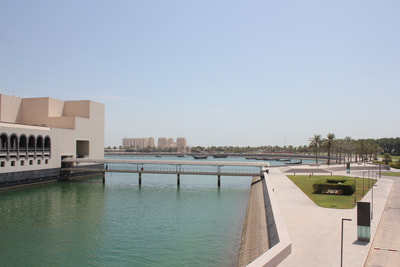 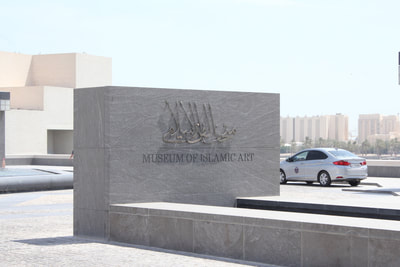 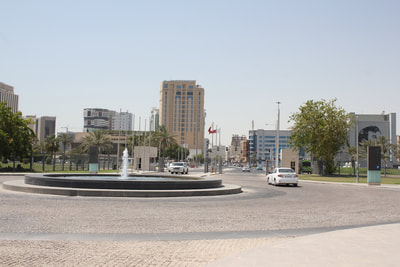 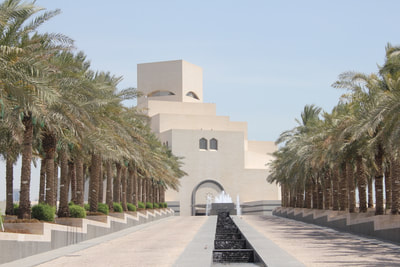 The museum itself was kind of small and very easy to navigate. I really liked all of the exhibits on presentation because it was cool to see collections of Middle Eastern art and artifacts throughout history - something that you don’t really see in the US. There was a huge array of carpets, jewelry, dishes, pots, etc. and you could see which area of the Middle East the particular artifact came from.

When I was there, two embarrassing things happened to me:

1. When I was looking at a particular exhibit, I peered in closer to get a better look but it turns out there was a panel of glass separating me and the exhibit! So, I ended up walking face first into the glass and banged my knee. Good thing no one really saw me, or else I would have just left and taken my chances in the 110+ degree heat.
2. There are also comfortable chairs around the museum, and I sat on one to rest my feet. Before I knew it, I was slouching and I must've fell asleep because the next thing I saw was the security guard shaking me awake! I made a half-assed excuse and he said I seemed really tired, which was a very accurate statement.

But despite these incidents, I really enjoyed my time in the museum! I would highly recommend this if you have a layover in Doha.
After that, I went downstairs to get something from the cafe to kill some time. I got some fruit and chicken biryani and took in the view - there’s a huge window that overlooks the other side of Doha. I ended up doing a rotation of going on my phone, taking mini-naps, and zoning out over the span of 6 hours. Although it wasn’t my plan to have so much down time, I really needed the relaxation after going from place to place and just traveling so much.

I eventually decided to leave the museum towards the evening, where the heat was much more manageable. I walked to the Pearl and Souq Waqif. The Pearl is kind of cool, but I really liked visiting the Souq. There must’ve been hundreds of stalls selling all sorts of items. There were people selling animals like dogs, parrots, cats, iguanas, and rabbits. Other small shops and stalls sold clothes, pots, hookahs, and a lot of other things! I ended up just letting myself get lost in the market and just walked around. At this point, I would have liked to know a little Arabic - it would have been nice to interact with the shopkeepers!
​
For dinner, I ended up going to a group of food stalls and looking at everything. It was hard to decide on what to get because everything looked really good! I ended up going to a woman that had pots filled with food, and I just pointed at what I wanted. After that, I took an Uber back to the Marriott to get my bag. My Uber driver was struggling to find me, and while I was waiting, at least around 5 cars pulled over and tried to offer me a ride. My Uber driver eventually found me and took me to the Marriott, where I was able to get my bag and take another Uber to the airport.
Overall, I had a very nice time in Doha - it was cool to get a small taste of the Middle East. I never felt in danger when I was here, and the city itself was immaculately clean. I always saw a person cleaning or sweeping something everywhere I went. Although I might not go back to Doha in particular, I would definitely like to explore more of the Middle East someday - until next time!
Proudly powered by Weebly