Initially, I wasn’t planning on visiting Dubai, but I found a cheap one-way fare when I was planning to fly from Africa to Asia on Emirates. Emirates has been an airline on my bucket list, so I jumped at the opportunity. I was pleasantly surprised at how much I liked the city, but I don’t know how I would feel about living there for an extended period of time. When I was there, I saw all sorts of people there as Dubai has a lot of expats. However, if you do have a chance to have a long layover here, I would definitely take advantage of it. Dubai is a very unique city and I wished I had more time to explore it more in depth!

I flew in from Cape Town very early in the morning, and our plane didn’t actually have an actual gate - we all got off on the tarmac and had to get on these buses. When I stepped off the plane, I felt a wave of heat as it was around 90 degrees F at around 5am! That experience reminded me of when I was in Doha, and I knew I was in for a rough day.

Once I got off the bus and through immigration, I decided to leave my backpack at the left luggage area while I explored the city during the day. It’s in the Arrivals hall and the signs should take you there. They typically charge you 25 AED per 12 hours, but if you have valuables in your bags it’s 30 AED per 12 hours. They give you a little ticket to hand in when you return, so don’t lose it! Once I was done with that, I just lazed around for an hour or two because nothing would be open that early.

After I relaxed for a bit, I went to take the metro towards The Palm Jumeriah and Atlantis, the Palms. I bought a nol card with a one-day pass on it because I assumed that I would be taking the metro a lot that day and that it would pay for itself (which I was right about). It was also more convenient to not worry about reloading the card.

The only way to really get to the Palm Jumeriah is to take public transport there, but Google will say that there’s no method (which is false). Just put your destination as the Palm Jumeriah 1 Tram Stop, which will give you the directions you need. Once you get to the tram stop, just follow the signs that take you to the monorail station. You’ll have to walk in a parking garage for a while but it’s the correct way. Taking the monorail one-way costs 20 AED. The monorail stops at multiple spots but most people visit Atlantis, The Palms.
​
I would say that the coolest part about this segment was the journey, not the destination. If you looked outside the window of the tram, you could see people’s houses that literally look like palaces. Each section of palaces has its own shared beach with the other residents. It would be great to live life that way! The Atlantis hotel is just ridiculously extravagant with a big water park. It’s cool to walk through, but otherwise that’s really it. 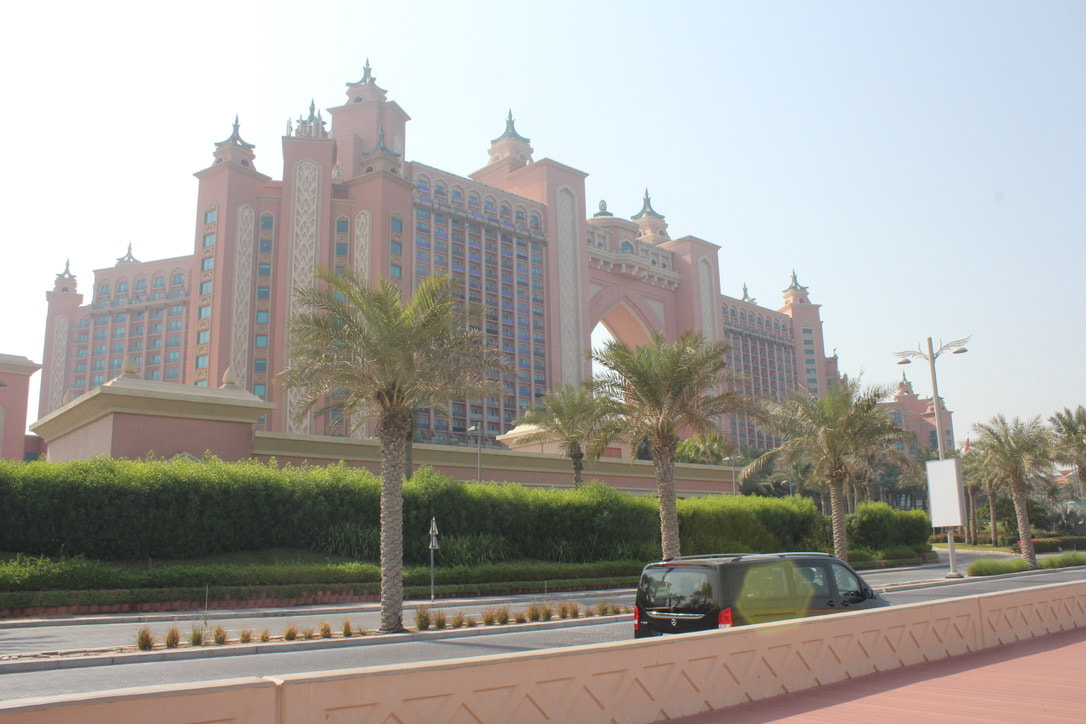 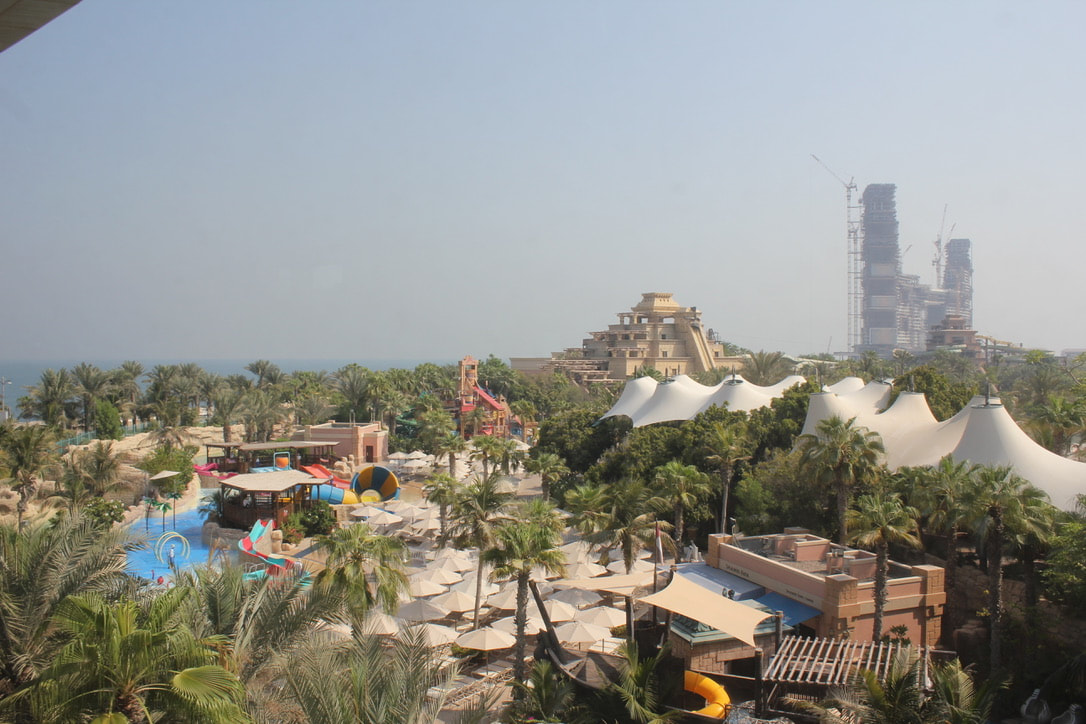 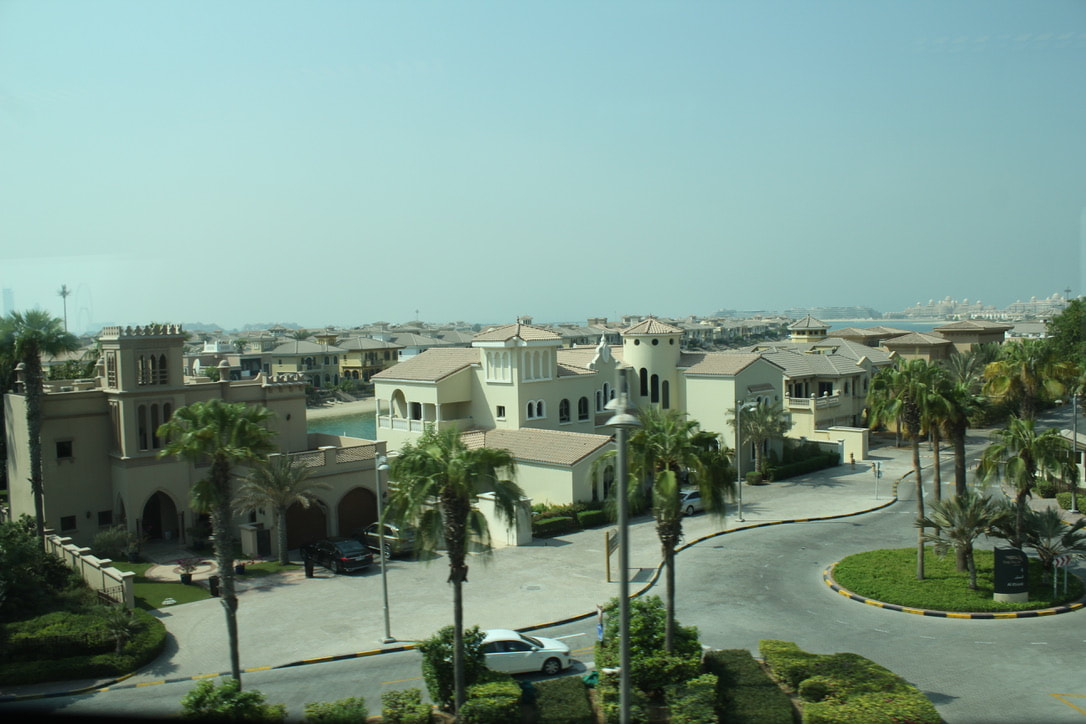 After getting back to the main tram station, I decided that I had seen everything I wanted to see. The next stop was the Burj Al Arab, so I took a bus there. However, when I got there, that’s when I found out that you had to be a guest or have a restaurant reservation to go inside. So, I was only able to get a few pictures of it from afar and then I started heading towards the Gold Souk.
​
The Gold Souk is really cool as I’ve never seen such a shiny place in my entire life. You’ll see rows and rows of vendors and their stores trying to sell you gold and silver. It’s definitely interesting to see, but you probably won’t be buying any. Plus, I felt like a lot of the gold and silver were fake - but that’s just what I thought. 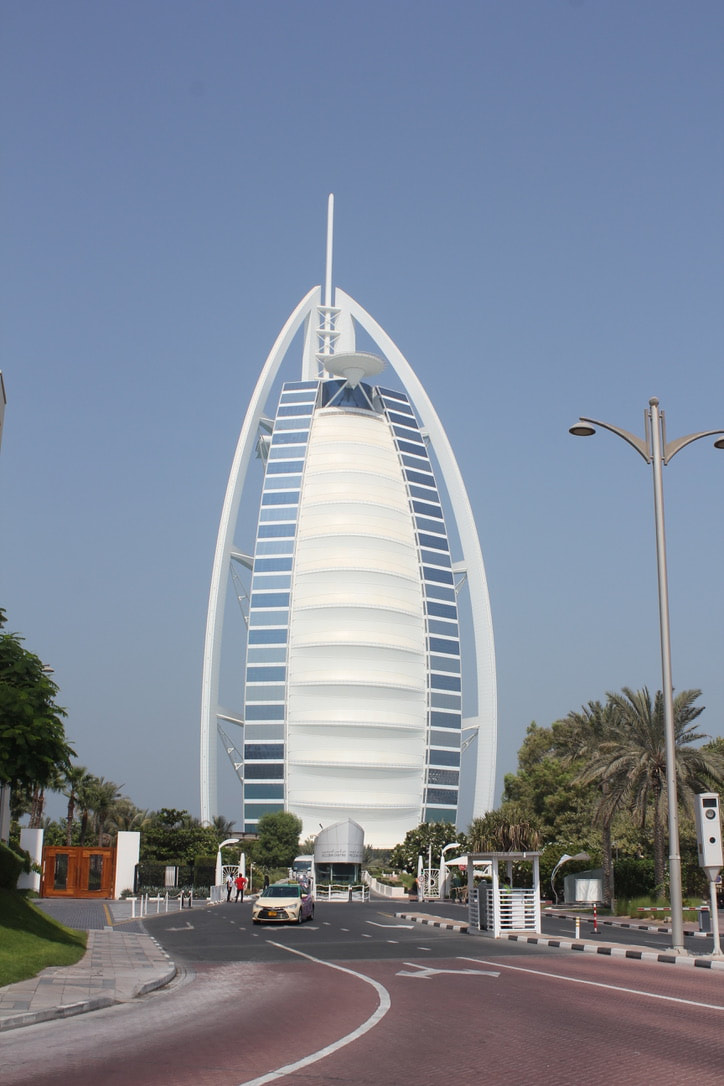 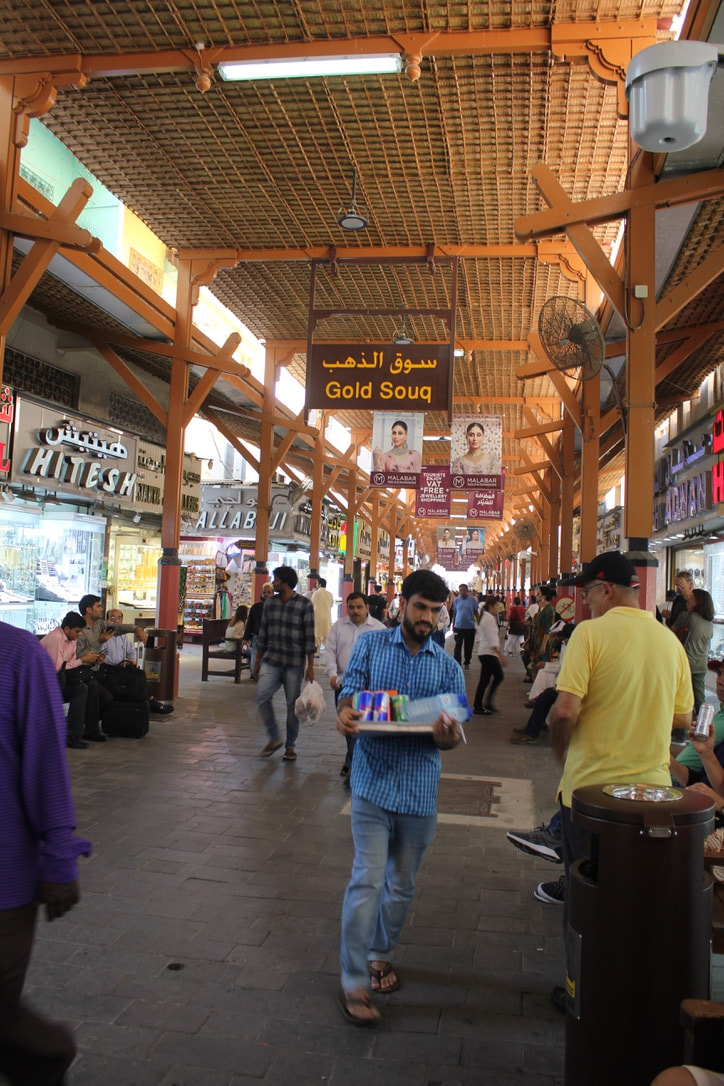 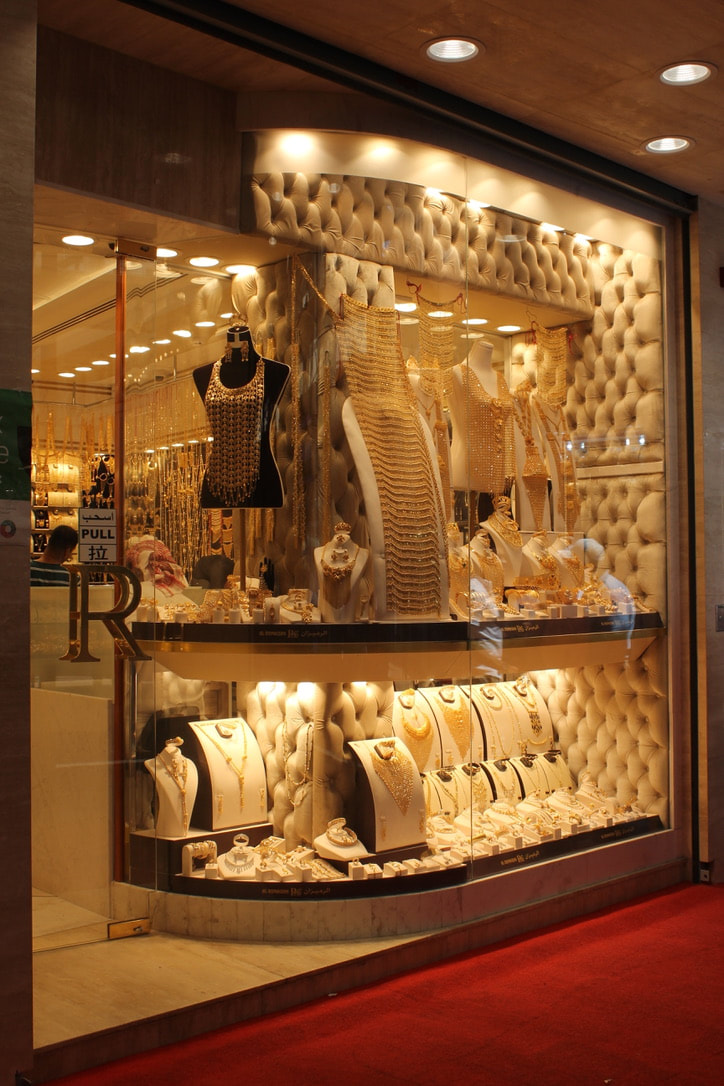 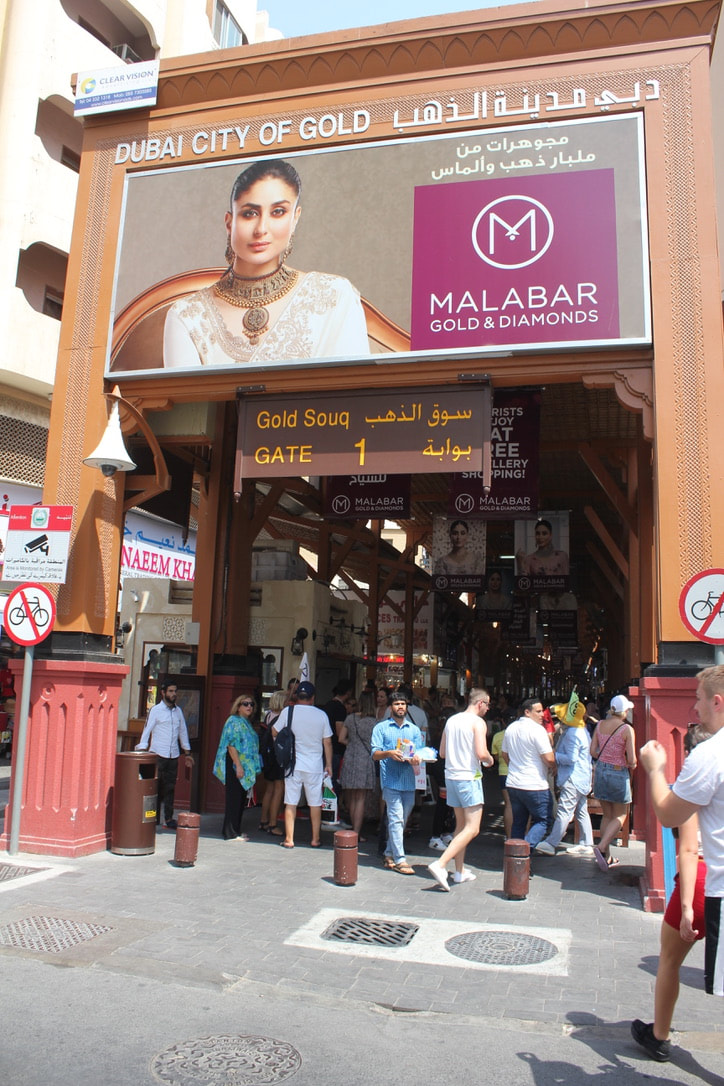 After walking around the souk, I took the metro to the Burj Khalifa, which is supposedly the tallest building in the world. You can buy your tickets online or in person. Either one works, but I would recommend that you just pay for the cheapest experience. You can basically pay more to go during sunset hours or to a higher floor, but after the 120th floor it’s all the same. I ended up opting for the cheaper version. Physically going up to the observation desk felt like a ride at Disneyland, where you have to walk for ages before actually getting to the top.
​
Once I got all the way up, the view was better than I was expecting. When I’ve done similar experiences in other cities, it looks very similar in all directions. However, this observation deck has different views in each direction. You could see where builders are trying to develop next vs. the older areas. There were a lot of people there when I went so getting a picture was somewhat difficult. If you could go during an off-peak time, I would definitely recommend that instead. After I got my fill of pictures, I went down to the exit of the observation deck and made my way back to the Dubai Mall (the Burj Khalifa and the Dubai Mall are basically connected to each other). 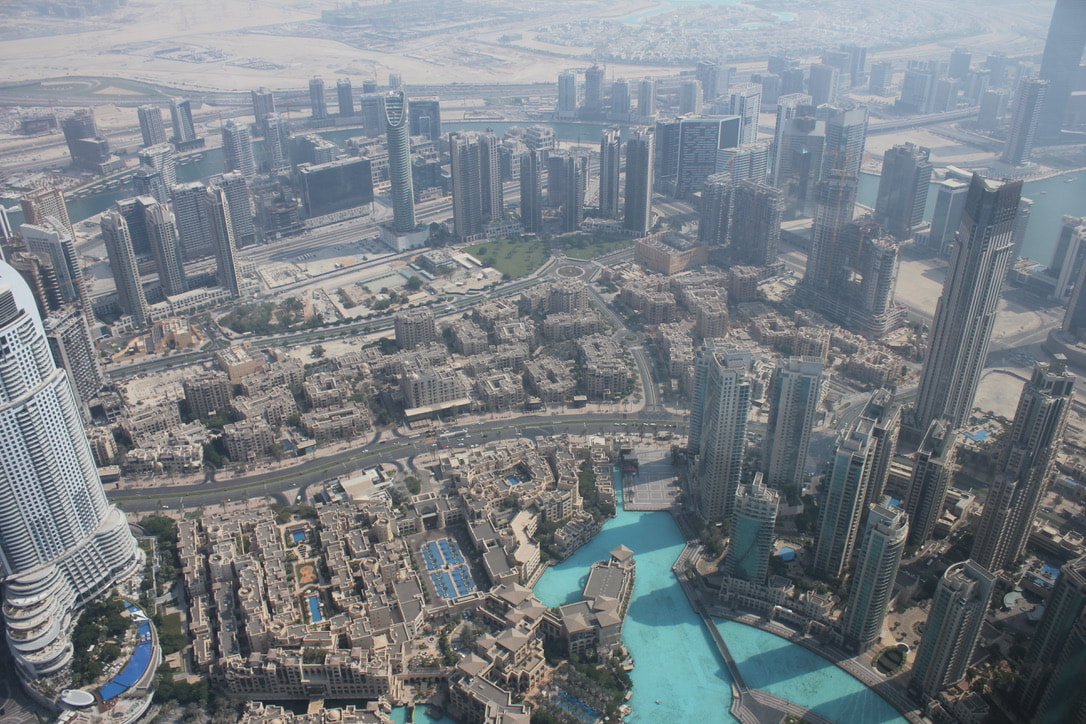 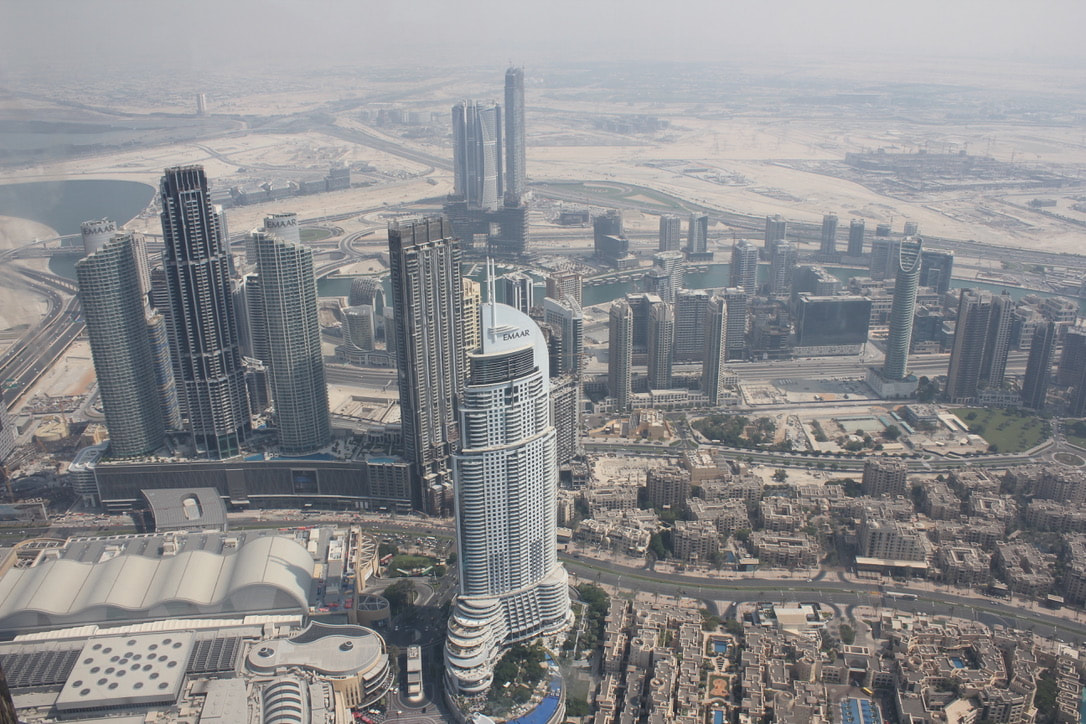 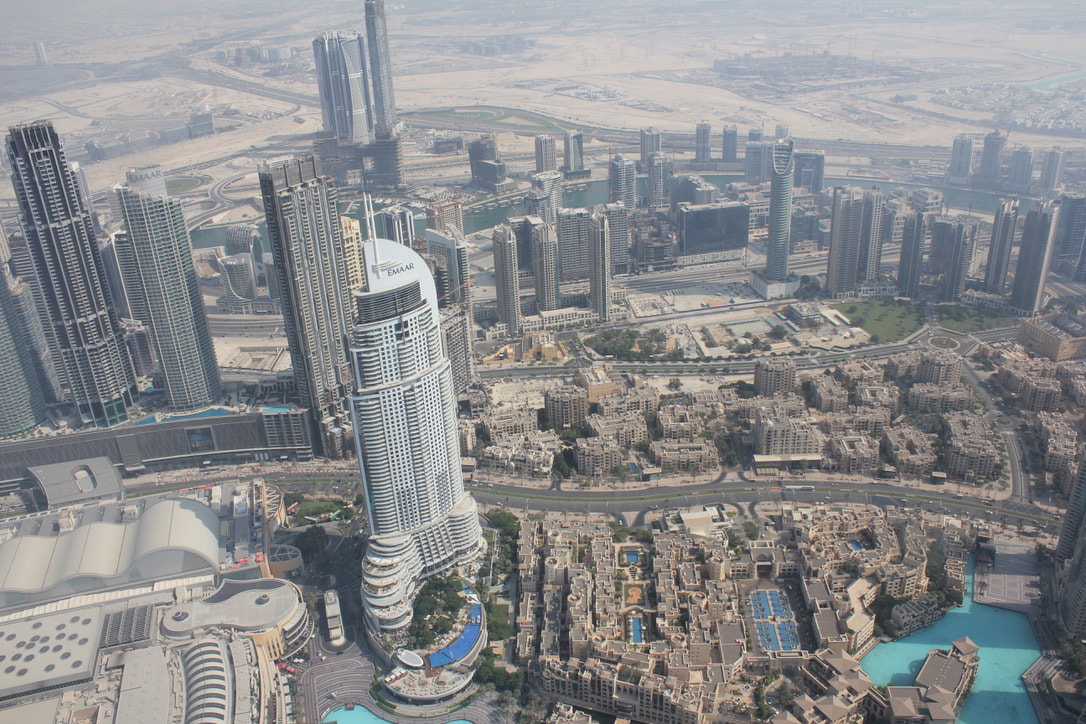 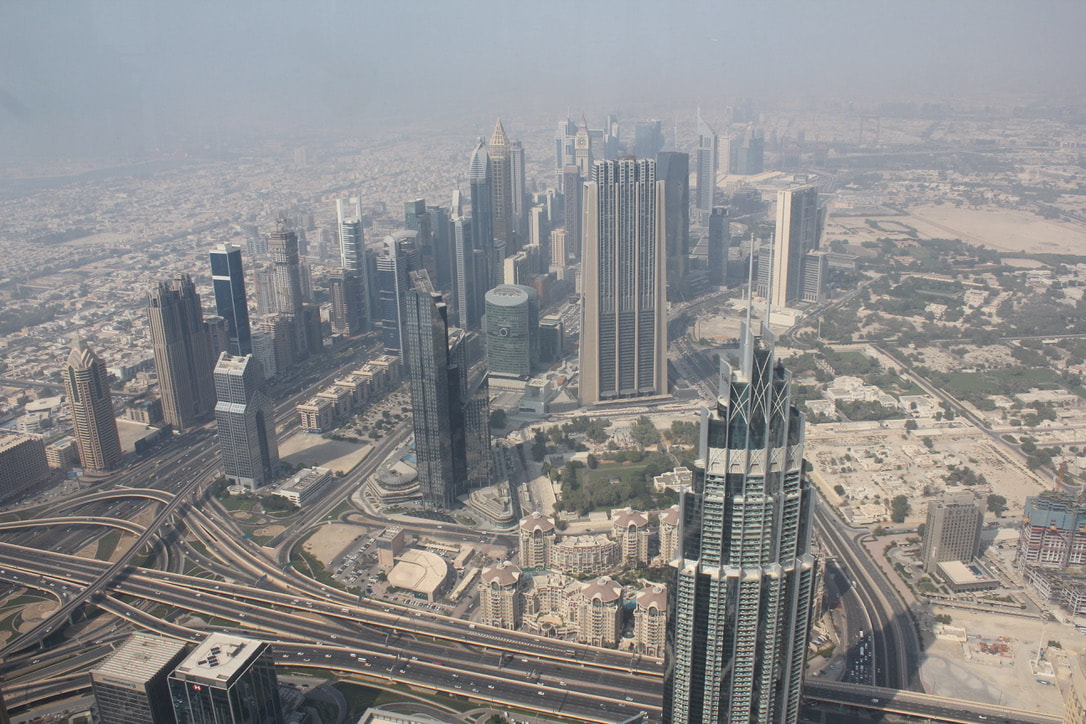 I usually don’t go to malls when I travel, but I made an exception this time around and I was glad I did. The Dubai Mall is one of the biggest malls in the entire world, and I was starstruck at how enormous it was. It felt more like a resort than a mall, simply because it has a fountain show, aquarium, ice rink, and a lot of other things. It was also definitely the most extravagant mall I’ve been to.

I decided to get lunch first, since at this point of the day I was starving. I stumbled upon a food hall and decided to get something there. However, if I were to do it again, I would get something at the food hall on the higher level because they have more selections there. But, the selections there are all very "Westernized". After eating, I walked around the mall a little bit and saw the rest of the “scenic spots” I previously mentioned. You could easily spend an entire day just walking the mall!
​
At this point, it was getting pretty close to when I had to get to the airport so I started to head back. Dubai was a very unique place that I would like to explore more of, but I wouldn’t do it in any season other than winter! 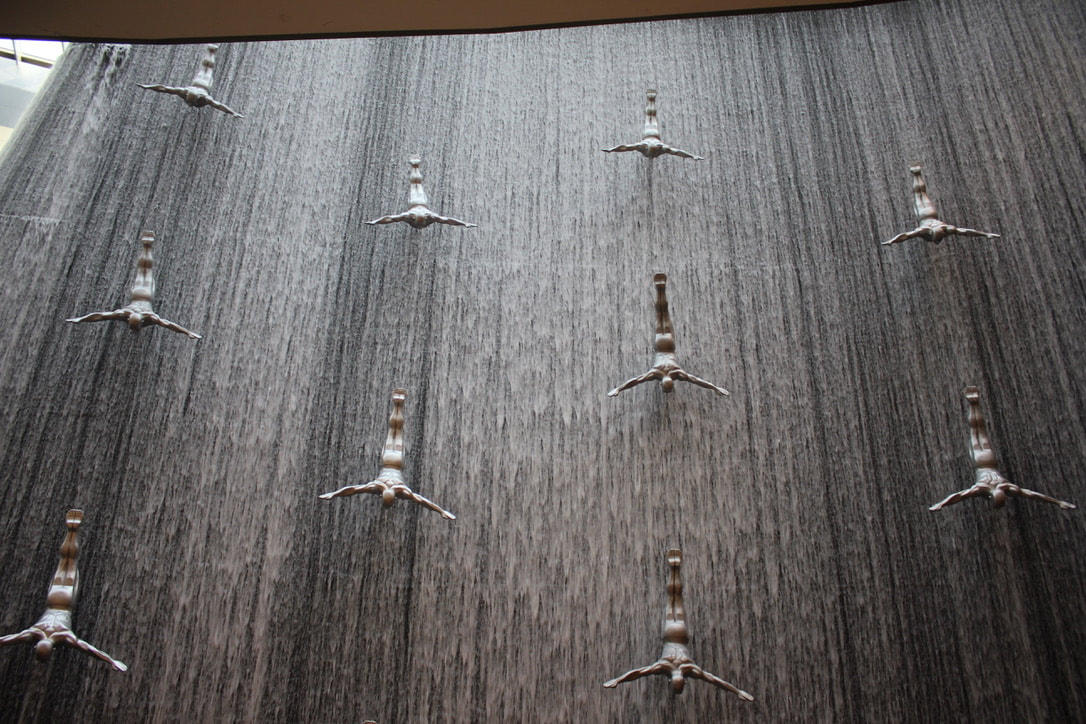 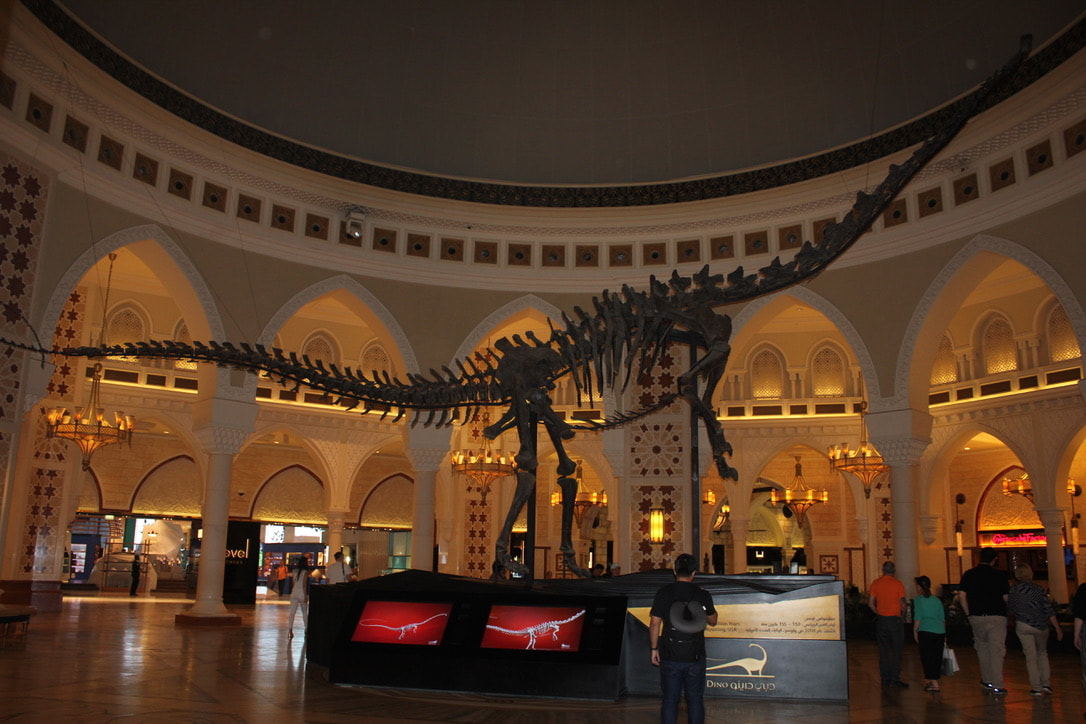 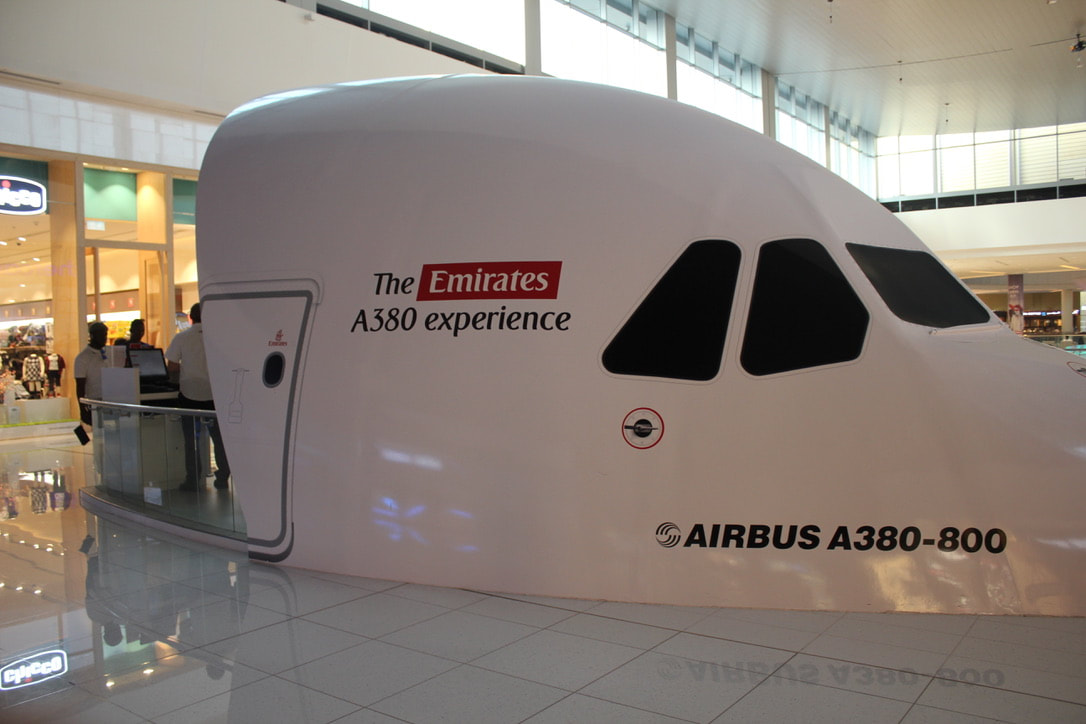 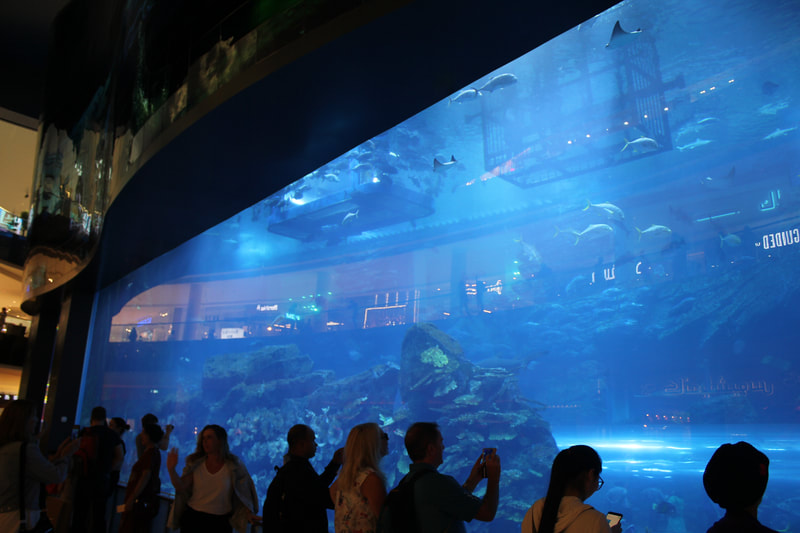