I didn’t plan on adding Kuala Lumpur to my post-graduation trip, but a flight cancellation forced me to re-route my original itinerary through Kuala Lumpur. After visiting KL, I can safely say that I am glad that events went this way! Although I did manage to do a lot during my 1-day layover there, I wish I had more time to slowly explore the city and see more of the sights. Kuala Lumpur is a very vibrant city filled with good food and things to do. I’ll definitely be back some day!

My flight from Manila landed at Kuala Lumpur in the evening, so my plan was to just get some rest and explore a lot the next day. It wasn’t too hard to navigate through the airport so I was out pretty quick. To get to the city center, I decided to take the KLIA Express (it’s spelled a different way). Taking the KLIA Express from KLIA 2 to KL Sentral only takes about half an hour. The trains are very fast and clean, and they even have Wi-Fi! You can also opt to take various buses to the city center, but I chose to take the KLIA Express because I was really tired and I just wanted to get to my hostel and sleep. The KLIA Express is somewhat expensive by Malaysian standards, but in terms of American dollars it was reasonably priced.
​
Once I got to KL Sentral, I was supposed to take the MRL to my hostel (according to Google Maps). However, I could not find the entrance to the MRL for the life of me. KL Sentral is basically the main transfer point for all the main subway, train, and commuter rail lines so it was difficult to find the correct entrance! I wandered around for at least half an hour before I started heading what I thought was the right way, but it was actually the wrong way. However, the subway station I ended at also stopped at the station that was close to my hostel! So basically by sheer luck, I was still able to make it to my hostel. When I arrived at Sunshine Bedz KL, I checked in, did some research for the day, and fell asleep almost instantly.

I started off the day by taking advantage of the free breakfast my hostel provided and then I headed to the Batu Caves. There are multiple ways to get there, but I chose to take the Komuter train since it goes directly there. However, I had to wait around 30 minutes to get on the train - if you’re in a time crunch, I suggest getting a Grab instead.

Once I got to the caves, I started to walk towards the huge yellow statue of some god (I don’t exactly remember what it was). On the way there, I walked past a guy selling coconut juice. Basically he has a bunch of unopened coconuts and chops it open right in front of you! The guy chopped the coconut so hard that the juice squirted on me twice.
While the yellow statue and the cave itself is pretty cool, I would say the best part was the monkeys and how they would steal food from tourists. To get to the caves, you need to climb a huge flight of stairs. On the way up, I saw a monkey steal someone’s orange soda and just start drinking it! As you climb higher, you could see some tourists trying to feed the monkeys peanuts and bananas. I thought it was quite funny to see.

After visiting the caves, I decided to head towards Suria KL Mall and the Petronas Twin Towers. However, on the way I got very hungry so I tried to see if the mall had a food court, and it did! I got a little carried away here as I basically just gorged myself on food. I was able to eat 2 lunches and get a smoothie for only around $10 USD!

After eating lunch, I decided to walk to KL Park and take in the view of the Twin Towers. When I saw the towers’ entirety, I was absolutely stunned - it’s hard to believe that this isn’t the tallest building in the world anymore! Then, I walked around the park a little bit more and stumbled upon a small water play area for kids. If I had brought a swimsuit, I would had definitely jumped in because it was quite hot! 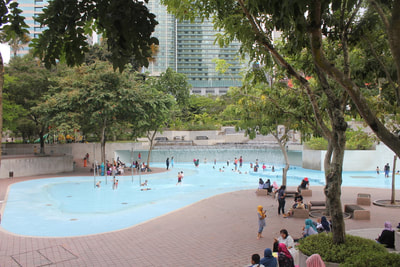 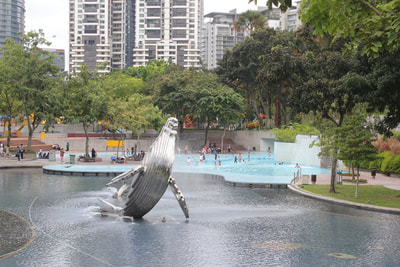 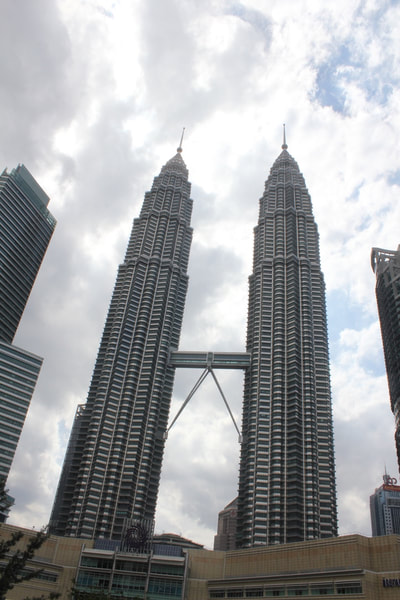 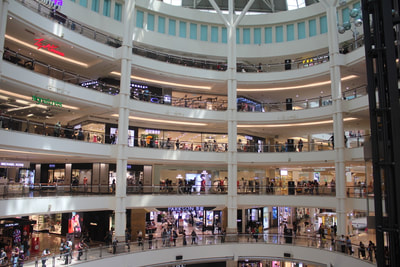 Then, I decided to head towards the National Mosque of Malaysia. When I got there, it was closed to non-Muslim tourists! Apparently, non-Muslim tourists are only allowed to visit the mosque at certain times. However, I was very lucky in the fact that they would be letting in visitors in the next 15 minutes! So, I just waited alongside the people that came early. I would recommend coming early because once I was going in, there was already a huge line behind me! Also, if you are wearing shorts or anything revealing, you have to wear a robe that they provide for you. If you are wearing a t-shirt and long pants, you don’t need to worry. However, if you go during a hot day, you probably don’t want to put on a robe.

The area that you’re allowed to see is pretty small, but I thought it was still cool to just walk around and see the prayer area (you can’t go inside unless if you’re Muslim). After relaxing for a little bit, I decided to head towards Merdeka Square.
After briefly passing by Merdeka Square and taking a few pictures, I started to head towards the Central Market. There are lots of stalls selling all sorts of goods, but no one was aggressively trying to get you to buy things, which I thought was nice. I walked around for a bit before stopping to get some self-serve yogurt vending machine! It was only 5 MYR, but I would say I only paid to be amused by the machine.

I went out of the market and started to walk along Petaling Street, which is a huge street selling all sorts of goods! The most common things I saw were small electronic items, shoes, cologne and perfume, and watches. I didn’t let myself buy anything because I had no more space to take it back, but I decided to stop at a stall selling backpacks just to bargain for fun. I didn’t need another backpack, but I ended up getting one anyways - oh well, I think I’ll give it away as a gift.

After walking on Petaling Street, I walked towards Jalan Alor Night Food Court to get some dinner. When I walked onto the main street selling all the food, I was initially very overwhelmed by all the choices! There were so many food stalls and lots of restaurants alongside the street - think of how waiters would try to get you to sit outside their restaurants in Europe. I literally couldn’t make up my mind on where to eat so I just decided to sit at a random place and looked at the menu. At this point, I felt like I traded one problem for another as the menu had LOTS of dishes and I couldn’t decide what to get. However, I felt particularly adventurous so I decided to get a bullfrog porridge and black pepper ostrich! The bullfrog just reminded me of a chicken wing with lots of bones, but I was surprised at how chewy the ostrich was! At the time, I’m not entirely sure if it was legit but I just let myself enjoy the moment.
​
After finishing dinner, I went to another stall and got ice cream from a coconut. I definitely liked the concept! Then, I walked inside a mall on the way back to my hostel. When I walked inside the mall, there was a fashion show going on! It was interesting to watch, but I came right when it was finishing up. After the show, I decided to head back to my hostel and get a few hours of sleep before my early morning flight to Hanoi.
Proudly powered by Weebly