Minneapolis is a city that wasn’t really on my radar, but I decided to make a weekend trip to the city while I was at St. Charles, IL for work-related training. I was there for two weeks, so I thought that I would make the most of my time there. A weekend trip from St. Charles to Chicago was more realistic, but I had already been there twice. The flight to Minneapolis from Chicago was reasonably priced and worked with my schedule.
​
I thought Minneapolis had a very laid-back vibe with a big sports culture (Timberwolves and Vikings fans anyone?). It’s no New York City or Chicago, but it still has that city feel. I felt like if I were able to stay longer, I would have chosen to rent a car and explore the area outside of Minneapolis. Overall, the city is quite walkable to some extent and the light rail is convenient. I would recommend visiting the city if it’s on your bucket list or if you’re in the area, but I wouldn’t go out of my way to visit again.

I took a very early flight from Chicago to Minneapolis in order to save some money and make it a 2 day 1 night trip. Once my flight landed, I followed the signs to take the light rail to my Airbnb. The light rail system is like Portland’s system, where you pay at a machine before you get on but there aren’t any turnstiles – it’s all based on the honor system. I got an all day weekend pass which was $4 compared to a one-way fare of $2. The value of the pass blows buying one-way fares out of the water, but it really depends on you.

I got off at around Minnehaha Park and walked the last bit to my Airbnb. This was one of the most well-stocked Airbnb’s I’ve stayed at. In my room, my host had a little basket of various toiletries that you could use for free in case you forgot something. In addition, the dining area had a “breakfast buffet” where there was a very good selection of cereals, bars, coffee, tea, jam, and more! You were encouraged to take advantage of the amenities, which was a very nice touch. In addition, my room had a little notebook where previous guests wrote down little thank-you notes to the host.
​
After getting settled, I made the walk back to Minnehaha Park to see Minnehaha Falls and the rest of the park. I would say this is one of the highlights of this trip simply because of how nice the park is. When I saw the falls, the water was falling but the area around it was partially frozen – it was cool to see. I spent most of the morning walking around the park, which was a good choice. I would also spend time at the creek, where you could get a pretty view of the Mississippi River. 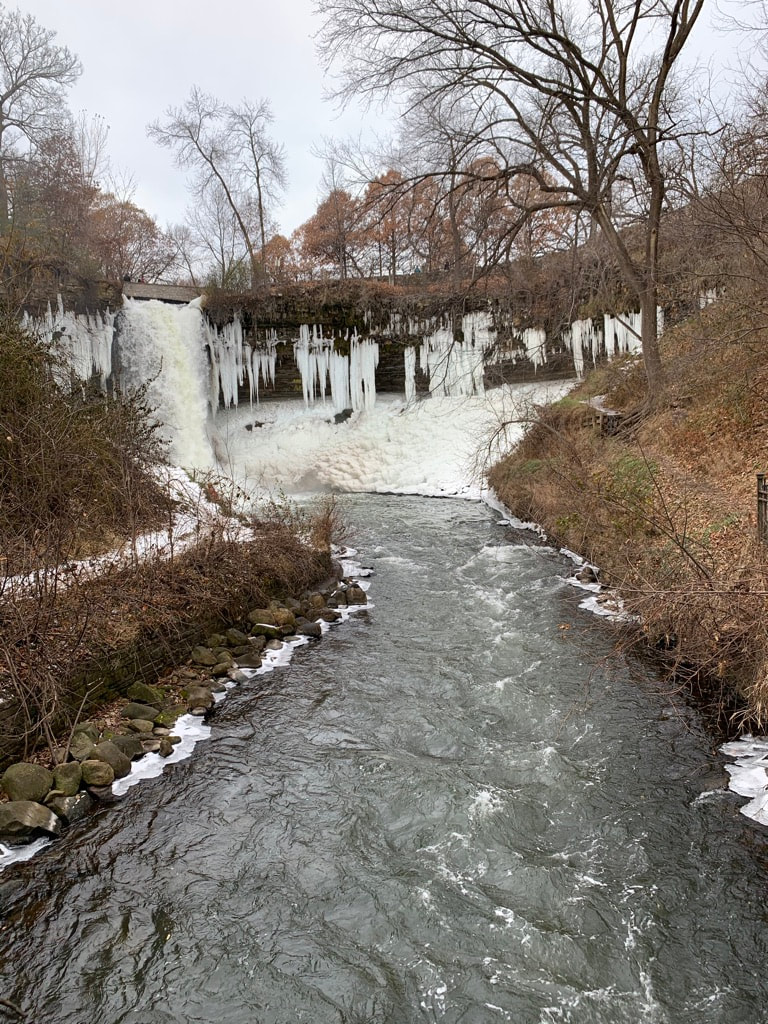 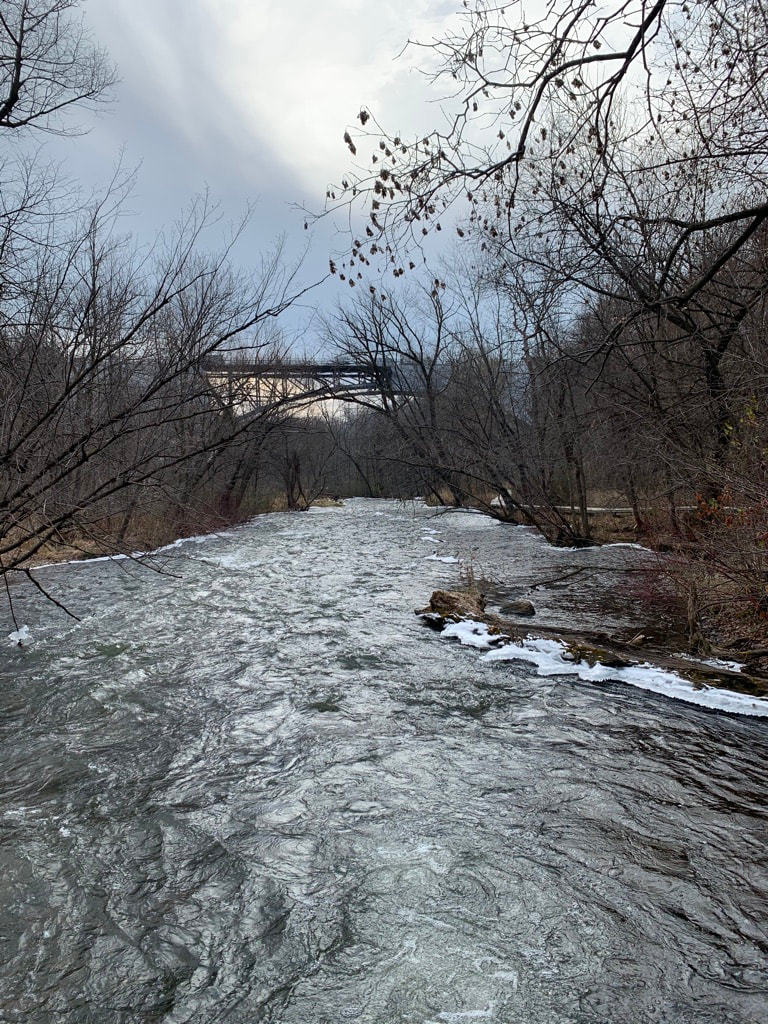 Walking around the park made me hungry, so I went to Midtown Global Market for lunch. When I got there, it had just opened for the day, so a lot of the shops and stores weren’t open. I would recommend going a little later in the day. The market specializes in having a wide variety of cuisines, so there’s something for everyone! After making several loops around the market, I settled on chicken pad thai from Sabbai Express, which wasn’t bad! 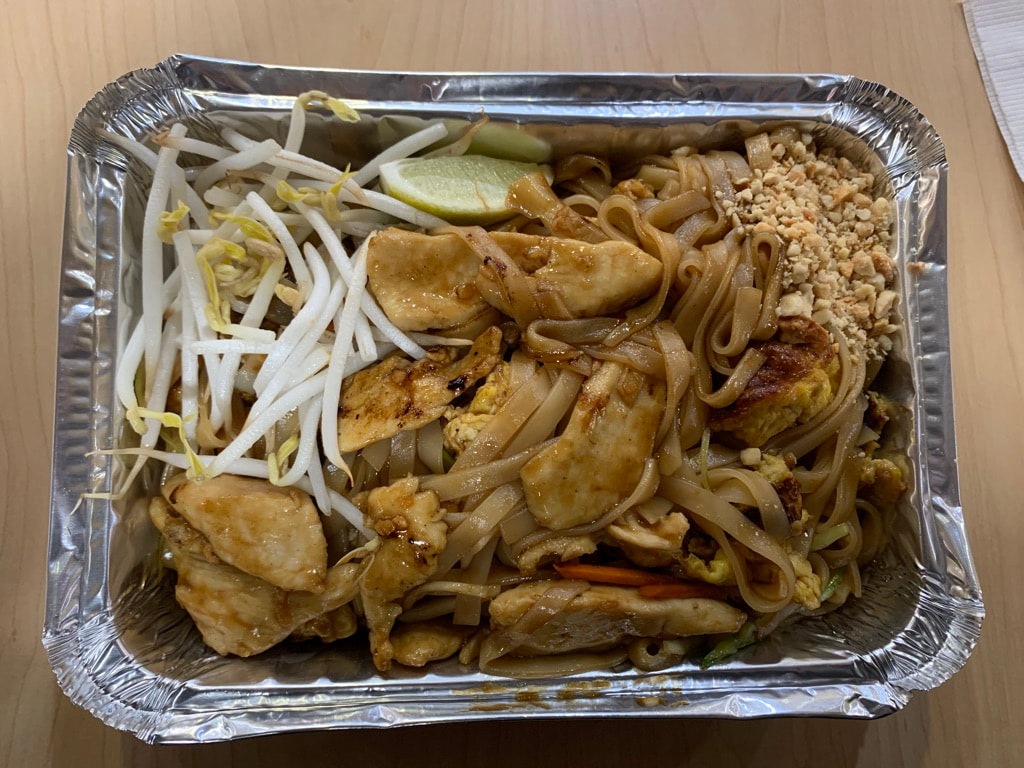 After eating lunch, I decided to explore downtown Minneapolis for a little before meeting up with my friend. I started near the Target Center and made my way towards the river, and then I walked through Mill Ruins Park and the Stone Arch Bridge. Walking around was a pleasant experience because there weren’t too many people out, so it didn’t feel crowded. In addition, walking along the river was very relaxing.
I started to make my way towards the Minneapolis Sculpture Garden to meet my friend, where we saw the sculptures. You could probably see everything in 30 minutes at most because the garden isn’t too big. Some of the sculptures are wacky but the iconic one is the one with a cherry on a spoon. You can’t climb up on any of the sculptures or else the PA system will tell you to get off!

Then, my friend and I went to Matt’s, which was a cross between a restaurant and a bar (in my opinion) that served the famous “Jucy Lucy”. The Jucy Lucy is a hamburger with two patties with cheese in the middle. It sounds gross but it tasted really good! The cheese is cooked inside the patty itself, so the cheese kind of oozes when you bite into it. You can’t take a big bite right away or else you’ll burn your tongue – the secret is to take a small bite first, wait for it to cool down and then eat it. It’s cash only and it’s crowded so you might have to wait, but it’s worth it.

Then, my friend and I walked around the University of Minnesota, which is on the other side of the river. We parted ways and then I decided to go to the Target Center and watch the Minnesota Timberwolves play the Houston Rockets. I don’t watch basketball too often, but I’ve never been to an NBA game before so that was something I wanted to experience! Plus, it was cheap – I got my ticket for only around $30. I can say that I had a great time. After the game, I went back to my Airbnb. 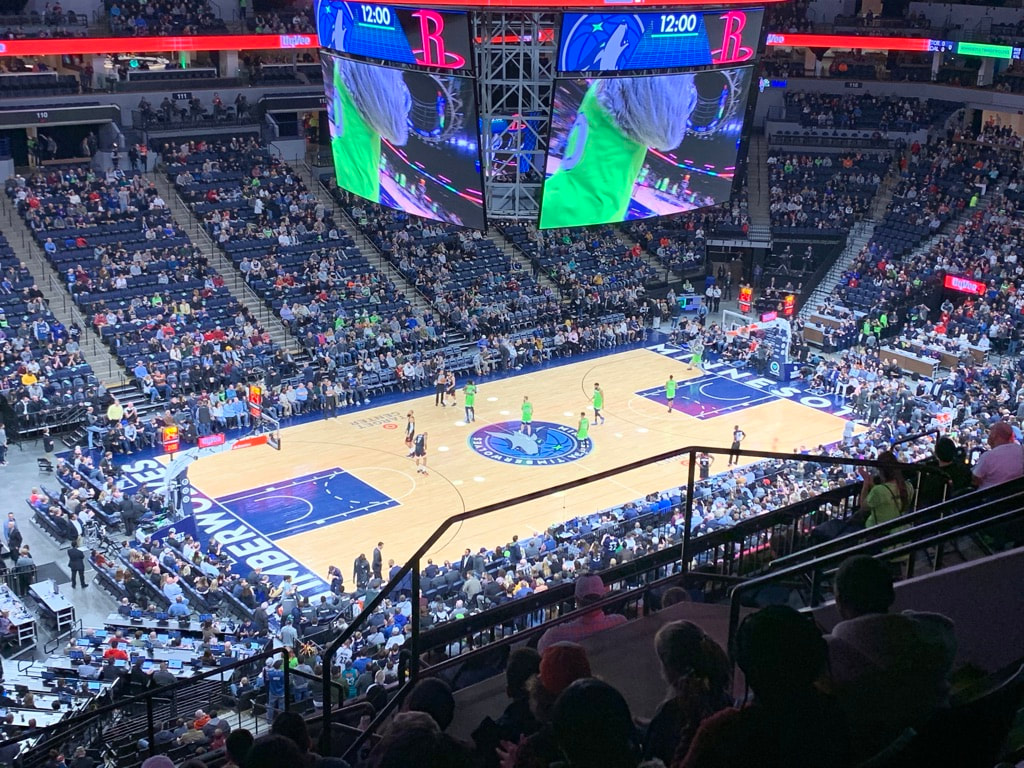 I let myself sleep in the next day and decide to dedicate most of the day towards visiting the Mall of America. After packing up, I started making my way to the mall by using the light rail as it’s the last station on the Blue Line.
The mall is massive – it’s definitely smaller than the Dubai Mall, but it still covers a lot of ground. You could stay here for hours if you wanted to. There’s a LOT of shops, an aquarium, an indoor theme park, and more. I would say how much time you want to dedicate here depends on how much you like shopping. I didn’t really have the space to buy anything, so a day was more than enough for me. However, if you want to take advantage of the fact that Minneapolis has no tax on clothes, then buy to your heart’s content.

I started out my visit by walking around the theme park, which was Nickelodeon themed! It was pretty cute as my 10-year-old self would had been stoked. After walking around the theme park, I decided to just let myself get lost in the mall until I had to leave for the airport. In the mall, there are lots of machines dedicated to giving you instructions. You just input the place you want to go to, and the machine will tell you how to get there based on where you’re at. I definitely used those machines a lot to get around, and I would recommend the same thing for you.
​
There’s also a lot to eat inside the mall and I was instantly overwhelmed by the options. Eventually, my hunger won over my indecisiveness and I settled on a small storefront in one of the food courts. I went to Piada which served quick Italian food and I got the basil pesto pasta, which wasn’t bad. After walking around the mall some more, it was time for my flight so I started to head towards the airport. 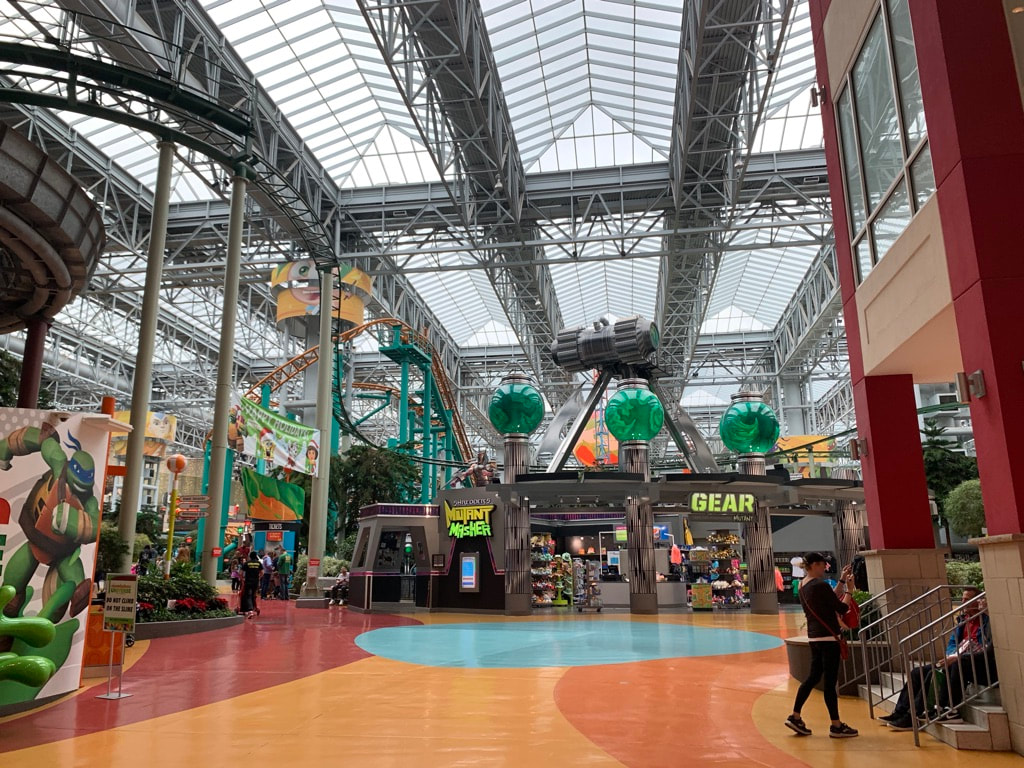 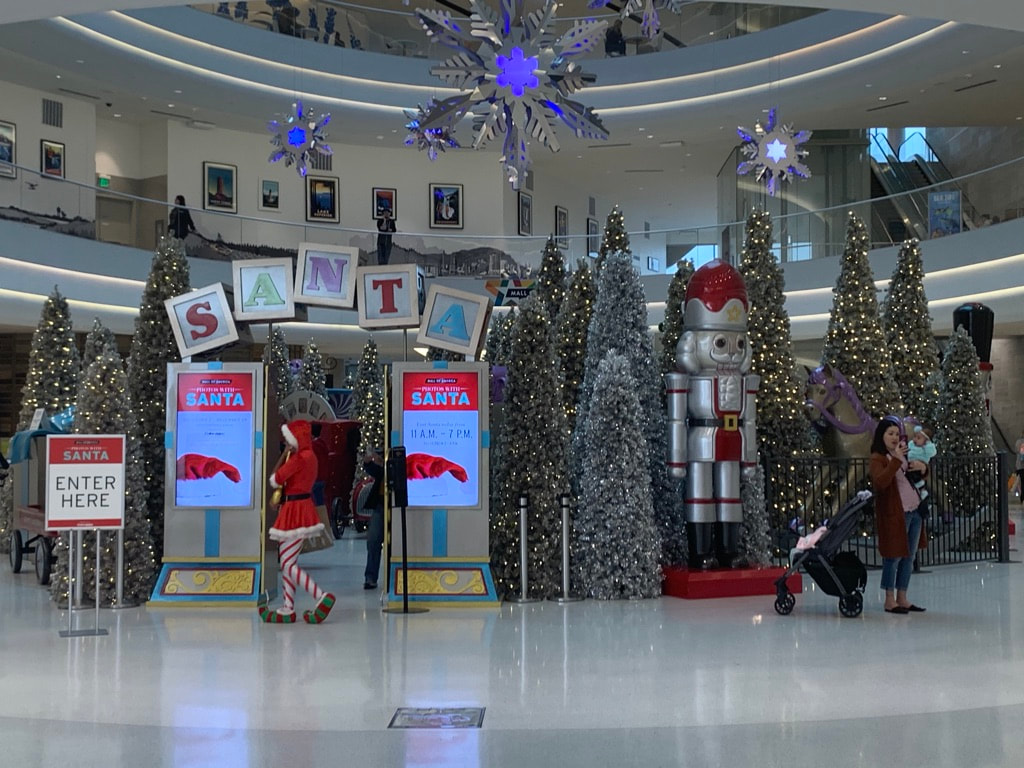 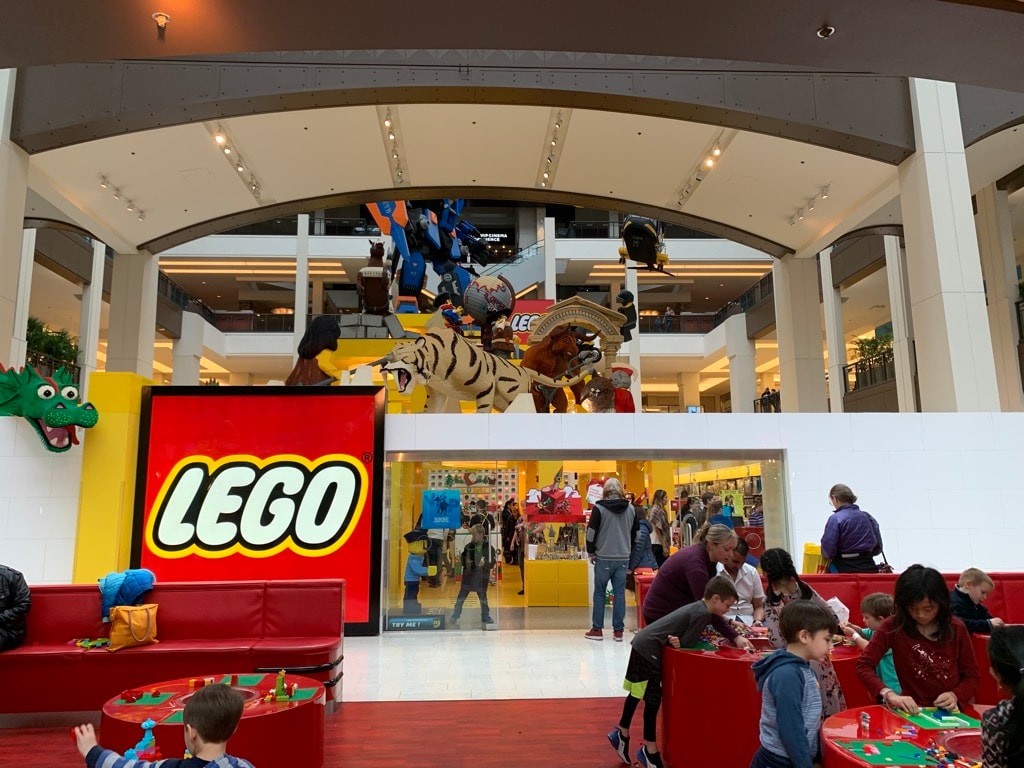