I was craving adventure and the cheap flight fare definitely tempted me. I had heard good things about Portland from a lot of my friends, so I decided to take the plunge and just bought the ticket! I’m glad I did because Portland did not disappoint. My only regret was not staying for longer and exploring more!

Portland is a very walkable city, which was something I wasn’t expecting. The public transportation was surprisingly easy to navigate and understand. Essentially, a 2.5 hour pass costs $2.50, and an all day pass costs $5. This is one of the most simple yet practical fare structures I have ever seen. It works on all methods of public transport in Portland, and you can download the TriMet app on your phone and buy tickets on there. What worked really well for me was that I used my contactless United MileagePlus credit card, so I just used my credit card to tap in and out and I knew I wouldn’t be spending more than $5 a day on transportation. I would highly recommend using their public transportation!

I landed at Portland International Airport late at night after flying in from San Francisco. The airport is small and easy to navigate. Taking public transportation to my hostel was very easy. When I arrived, all I did was follow the signs for the MAX Light Rail along with some ticket machines. I bought my ticket and eventually got to my hostel, which was the HI Portland - Northwest.

HI runs a network of hostels all over the world, but I usually never really book with them because they tend to be on the more expensive side. However, this hostel was actually the cheapest accommodation I found, so I finally had a chance to give them a try. I can definitely say that this was one of the nicer hostels I’ve stayed at! The staff I encountered were professional yet friendly, it was clean, and there was even free breakfast (bagel and a small drink). However, what I didn’t like was that everyone kept to themselves, which was fine. Eventually, I decided to go to sleep because I had a big day tomorrow!

I woke up a little early and started off my day by heading to Washington Park. I took the bus there and I decided to just let myself get lost in all the greenery and trees. Even though it was raining a little, it was beautiful and I enjoyed just immersing myself in nature! It was a great way to start the morning.

There is a famous Japanese Garden nearby that I wanted to see, but I didn't have enough time. In the park, there is a Holocaust Memorial. The rain, coupled with the rain and the somberness of the memorial made it a very serious atmosphere. 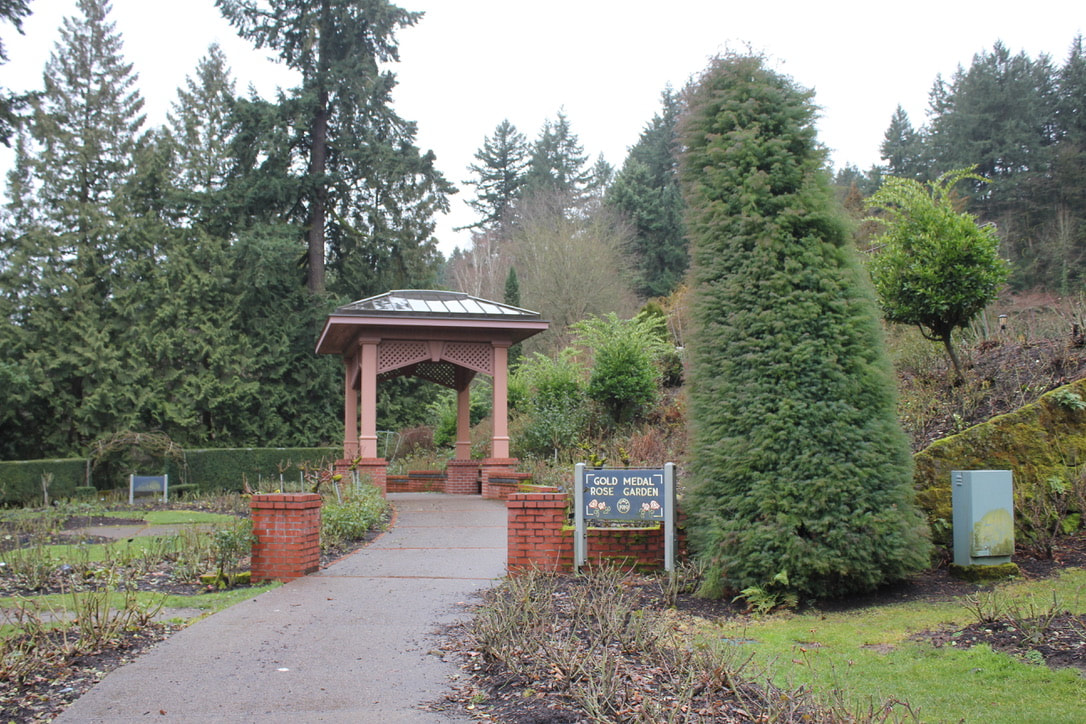 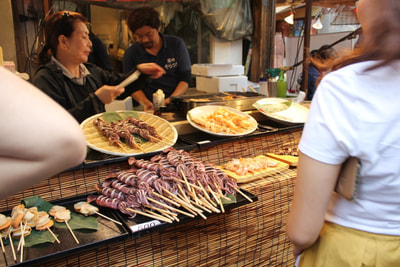 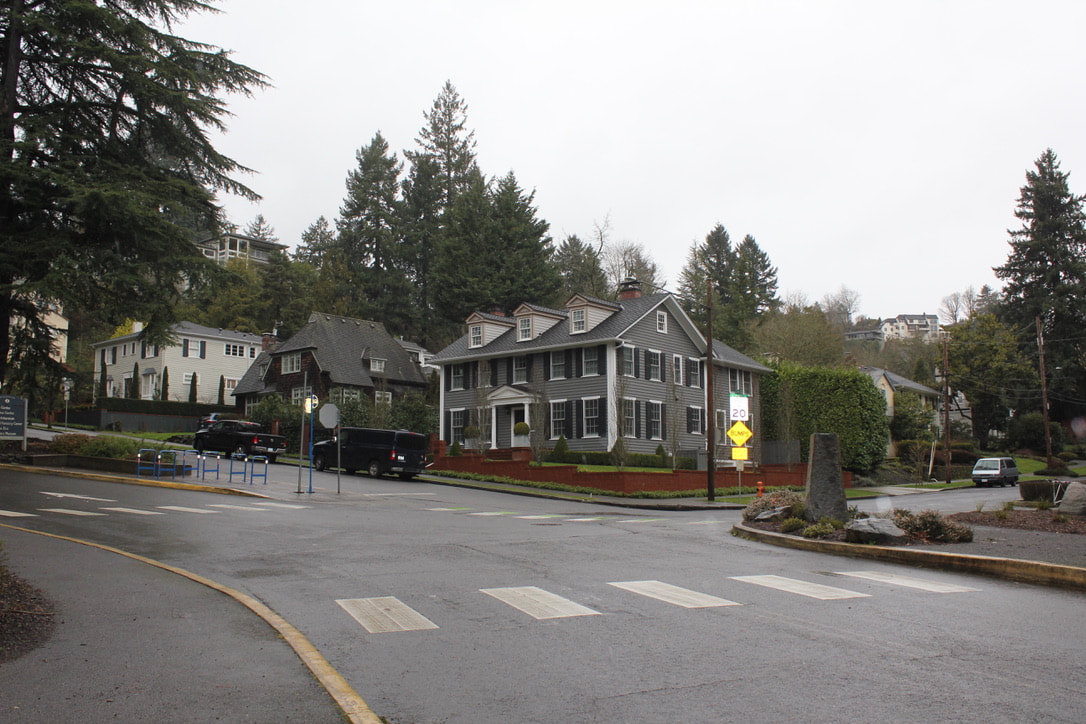 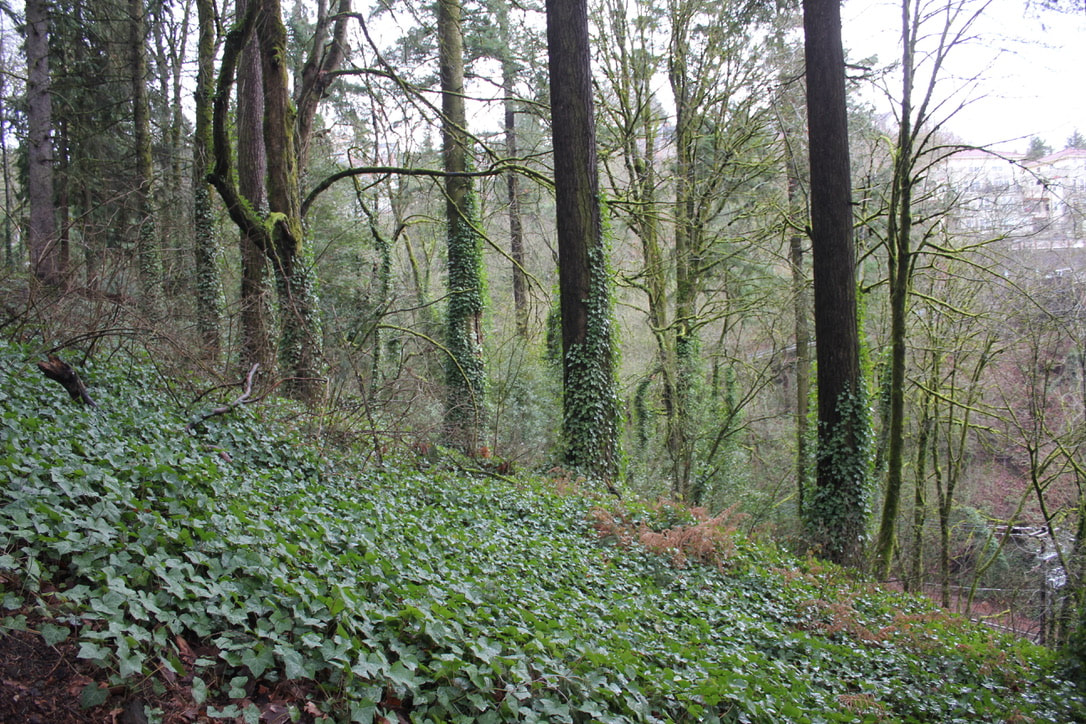 Afterwards, I went to Blue Star Donuts and tried their Mexican Chocolate donut and their OG donut. Both were very good but the Mexican Chocolate one was a little spicy! I had never really tasted spiciness in donuts before, but the flavors actually worked out.
​
Then, I went to the Portland Aerial Tram, which was a great way to get a nice view of Portland. It costs around $4-$5, but I was able to get on for free with my government ID. The tram itself is a great way to take in the view, but the true gem is going to the balconies at Oregon Health & Science University which lead to the view. The tram takes you to the hospital at OHSU, so I spent some time getting some nice pictures of the scenery and relaxing. 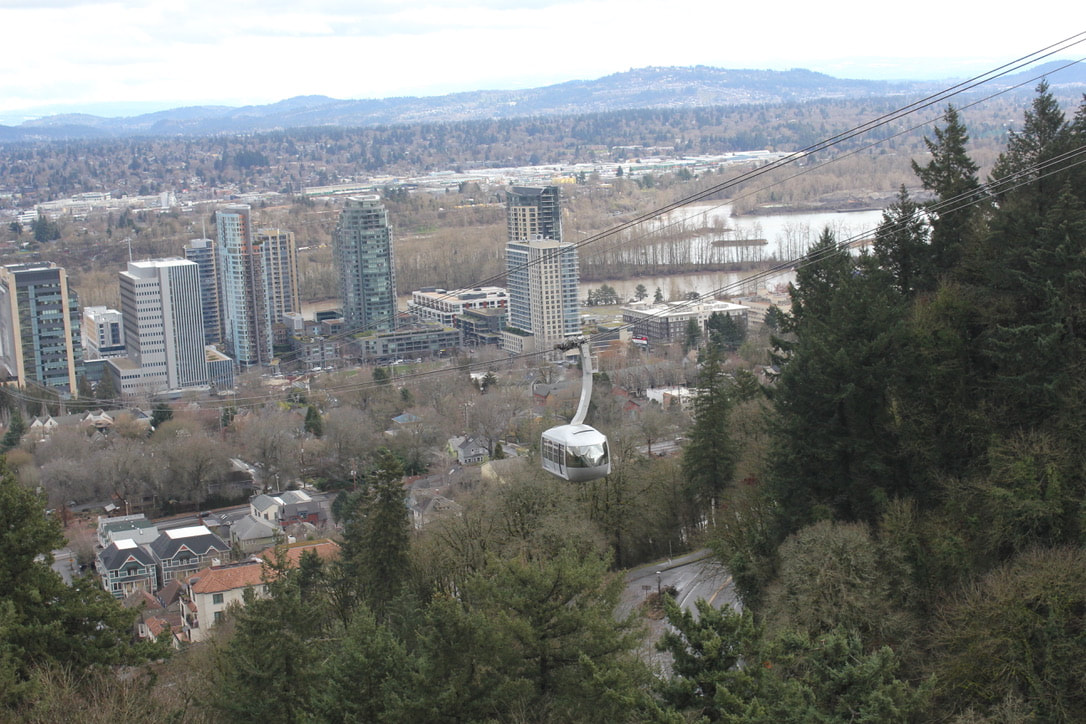 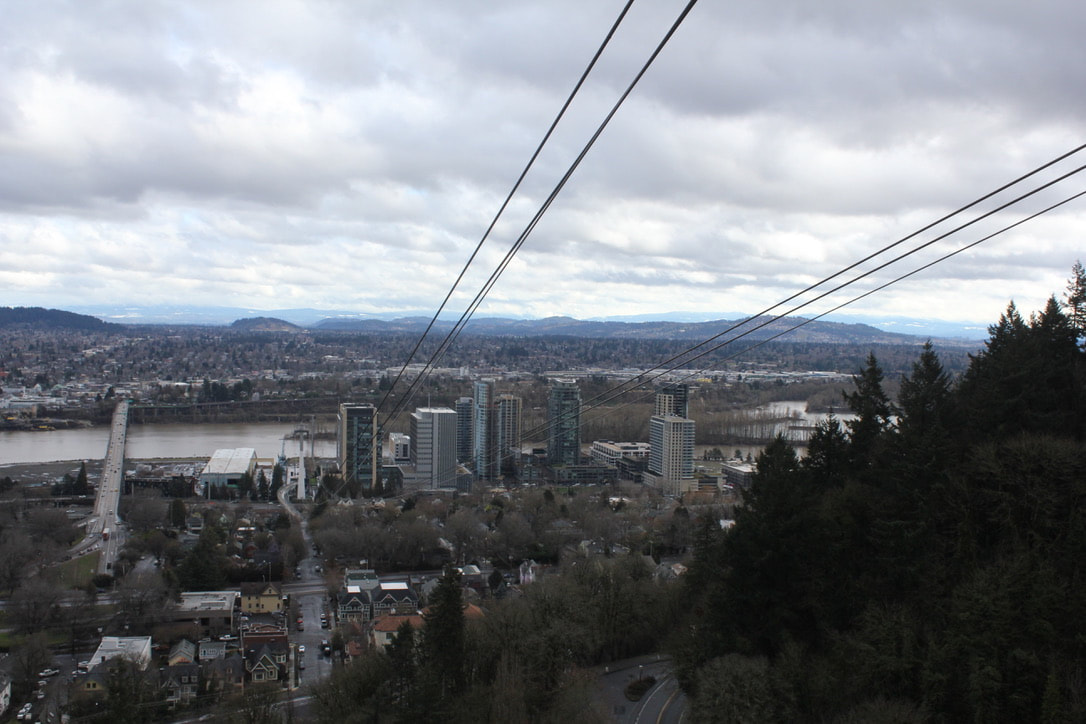 After I was done taking pictures, it was around lunchtime. So, I decided to go to the Alder Street Food Pod for lunch! On the way, I walked past Pioneer Courthouse Square.​ Essentially it’s a lot of food trailers just set up in a city block. It was quite overwhelming because there were so many things to choose from! Eventually, I decided on some Lebanese food, which was very tasty. Food pods like this one are all over the city, so I would definitely recommend going to the other ones if you have the time!

Then, I took the tram to the Pearl District where I decided to work my way back to downtown. The area is definitely up-and-coming with a distinct flavor to it! It was nice to see all the interesting shops as I made my way towards Powell’s City of Books. On the way, I ended up going into a shop that exclusively sold spices and curry sauces - it was definitely something.

Once I got to the bookstore, it was definitely jaw-dropping. I had never been in such a big bookstore, and there were so many books! The whole store is set on a city block, and there are around 5 stories, with multiple rooms of books in each story. Each room has different categories of books inside. You can easily spend the entire day in the bookstore just looking at the huge selection! I definitely stayed for at least 3 hours just walking around the bookstore. At the end, I ended up buying a few books as well! This was easily one of my most favorite parts of the trip.
​
After going to the bookstore, I went to the Portland Art Museum to take advantage of their $5 Fridays after 5pm. The museum definitely had a very edgy feel with a huge emphasis on American modern realism and its history. It was one of the better museums I’ve been to because there were a lot of unique exhibits. It was definitely a great way to hide from the rain while taking in some great art. I would definitely recommend coming here!
After looking at the artwork, I decided to eat at Masu Sushi for dinner as I slowly made my way back to the hostel. The place definitely had a more sophisticated vibe. It seemed like a place where you would take someone out on a date. I would say that the sushi was tasty, but it was definitely on the pricier side -  you can probably do better in Portland! I got the green machine maki, which was a vegetarian roll with a tofu tempura as the main protein. It was an interesting combination.

After eating dinner, I went back to the hostel to catch some sleep as my legs were sore and it would be another big day tomorrow!

I woke up a little early to get packed up. After checking out of the hostel, I went to Olympia Provisions to get a meal with a friend! We ended up going there mostly because of their caricature boards, which was a good call. The boards my friend and I tried were the brunch board and the chef’s choice! Both were extremely tasty, leaving me wanting more. I liked how the server explained what exactly was in each board. I also thought the service was good too!

After eating, I went to Voodoo Doughnuts to see what the hype was all about! There was a small queue when I got there, and their specialty is having these uniquely flavored donuts. I ended up getting the Voodoo Doll, which was decorated nicely and actually looked like a little doll. The donut itself and the filling itself was definitely very tasty! I would highly recommend coming here, but in my opinion, half of what you’re paying for goes into the design. The place is cash only, but they do have an ATM inside in case you forget to bring cash.
​
After getting the donuts, I went back to the hostel to pick up my bags and then I went to the airport to catch my returning flight to CA. I definitely loved my time there and I would look forward to visiting again! 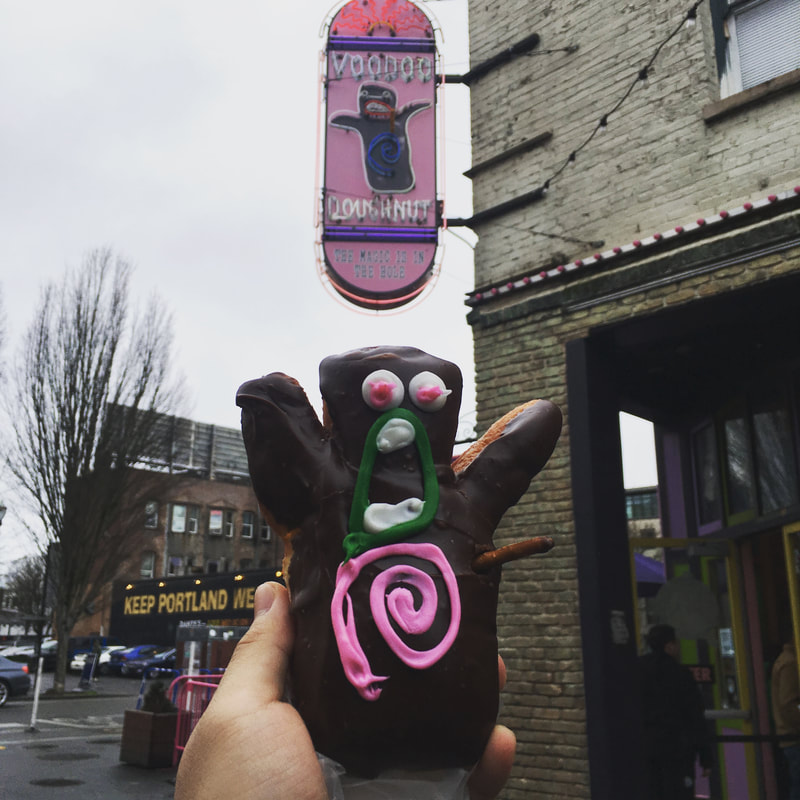 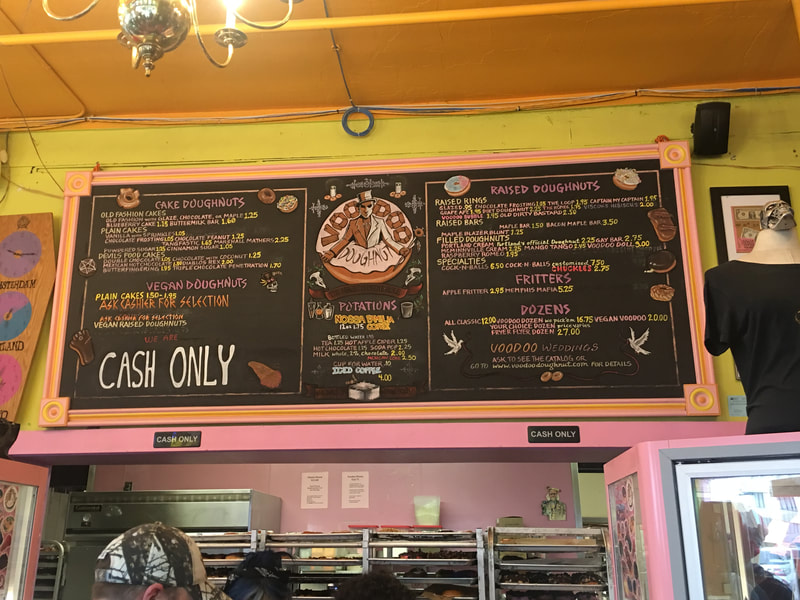