I've never been a very indulgent person. But, when I got an email from Qatar Airways offering me an upgrade for a reasonable fee, I knew this could be the opportunity of a lifetime. During this stage of my trip, I was actually spending less than I expected so I decided to take the leap. The upgrade was definitely pricey, but I don't regret it at all! The experience was simply indescribable and it's something I would do again - but when I'm making way more money in the future.

On this journey, I had never thought I would be paying to upgrade to business class because c'mon now, isn't business class for bougie people? But then, around two weeks before my flight, I got this email while I was sitting on a bus on my way to Amsterdam. 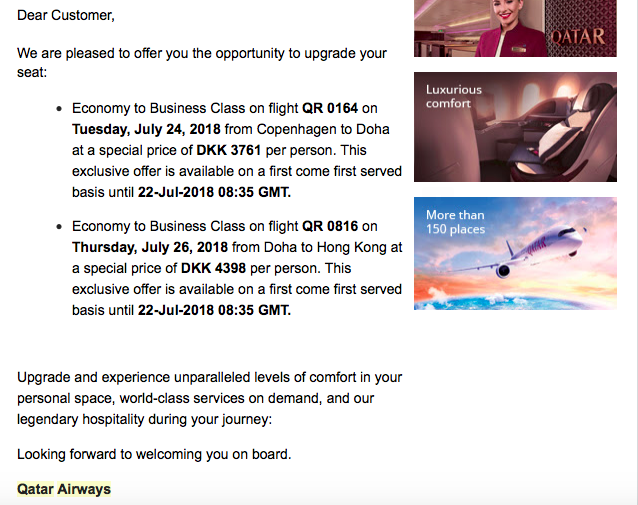 Normally, I usually just delete these emails because Economy class is more than fine with me. But this time, I was curious to see how much DKK 4398 was in US dollars because it couldn't hurt to check, right? However, I was surprised to see that it only cost around $692 to upgrade the Doha to Hong Kong segment! Back when I was looking up flight tickets, it was almost $692 just to fly from Europe to Asia for a one-way ticket.

So, basically, my decision came down to if I wanted to pay around $1000 USD to fly 57% of "plane time" in business class (CPH-DOH takes around 6 hours, while DOH-HKG takes around 8 hours). The retail price for a one-way business class ticket from Doha to Hong Kong costs around $3000! So, $1000 seems like a bargain (around $300 for the initial ticket and $700 for the upgrade). After consulting several friends on this, I decided to just take the leap and upgrade my flight. To justify the decision, I told myself that I wanted this experience as part of my post-grad trip - I knew that I would never get a chance like this again, and that I wanted to make the most of my trip. I've always been curious about business class, and I would always regret it if I didn't go for it. So, I paid for the upgrade and I got a confirmation email confirming the upgrade, and then another email with a changed fare class for the DOH-HKG segment.

At the airport, I checked in relatively quickly and was able to go through a separate, faster immigration line. I simply showed my boarding pass and the official directed me to a different lane reserved for anyone that didn't have an economy class ticket. Then, when they started the boarding process, I was one of the first people on the plane. This was a really strange feeling because I'm used to waiting in line to board and making sure that there's overhead bin space left over.

My flight to Hong Kong was on a Boeing 777-300ER, with the business class configured in a 2-2-2 fashion. Beforehand, I was a little bummed that Qatar Airways' new Qsuites weren't integrated on this particular flight route yet (look it up, Qsuites looks awesome!). When I stepped on the airplane, an attendant greeted me, looked at my ticket, and personally took me to my seat. When I got to my seat, the first thing I noticed was how comfortable my seat was and how much leg room I had - it was simply wasted on such a short person like me. 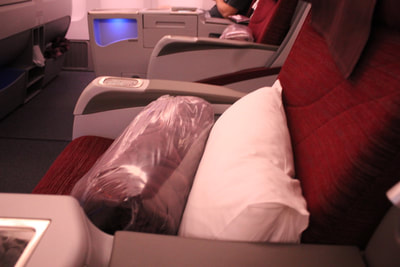 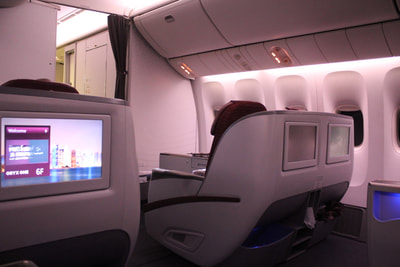 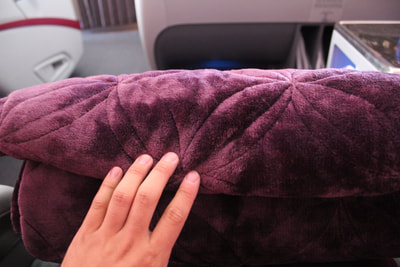 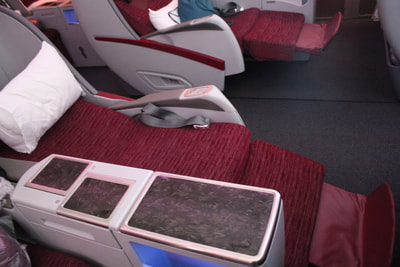 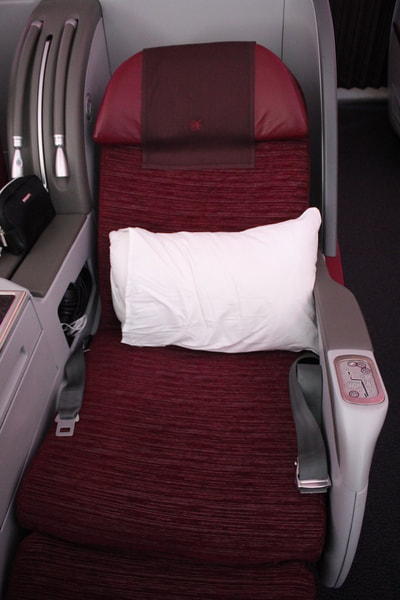 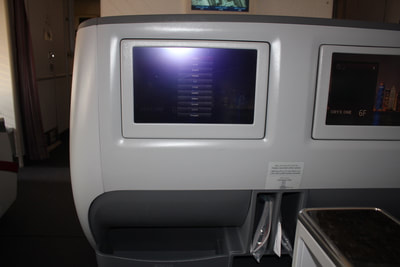 Each seat had a pillow and a blanket. The blanket was one of the softest blankets I've ever felt in my life, and it was pretty big too. In addition, there was the TV screen in front of me. Under that, there was a little compartment which I put my shoes in.

At this point, another flight attendant came to my seat and personally introduced herself, telling me that she would personally attend to my needs on this flight. She asked me if I wanted a drink, and I simply asked for sparkling water. She got that to me very fast, and then I started to just look at my surroundings. After she gave me the water, she asked if I wanted a newspaper. So, I asked for the New York Times and set it aside - I ended up not having the chance to read the paper, but it was amazing on how they just had the New York Times just there. 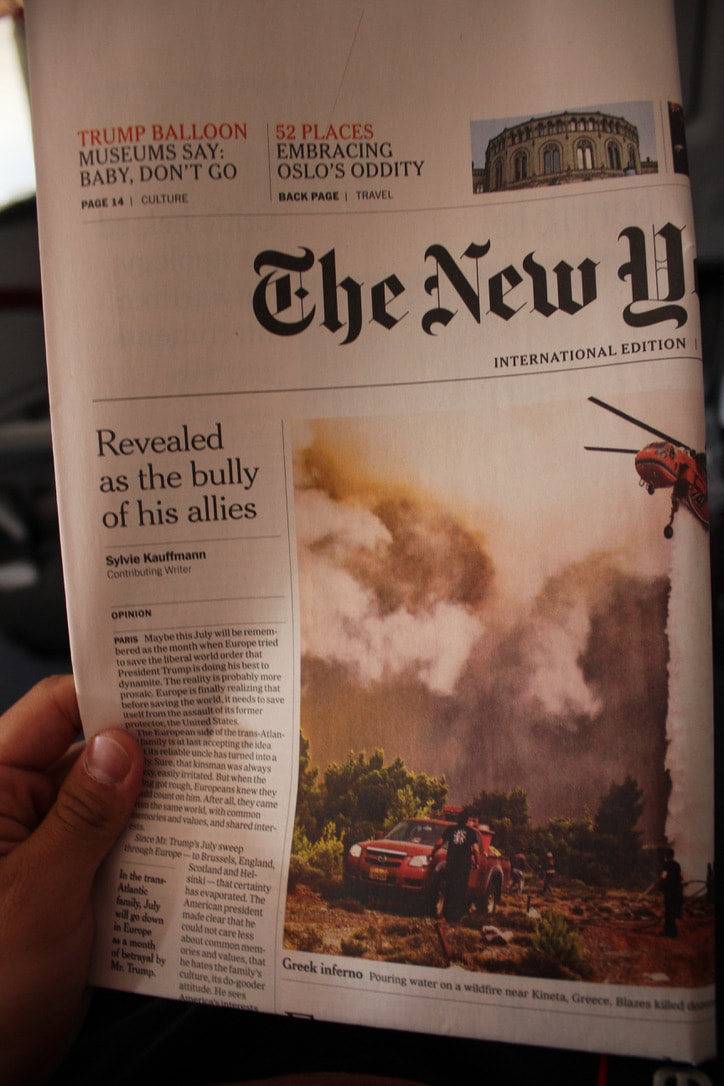 There was a little control panel next to my seat, and there were so many buttons on this thing I wasn't sure if I was able to use all of them. There's buttons to turn your seat into a bed (into what a lounge chair at the pool would be like), to raise the footrest, and to reset the seat into its regular position for take off and landing. The seat also had a built in massage function, so you could adjust the intensity and position of which part of your back you wanted to be massaged. 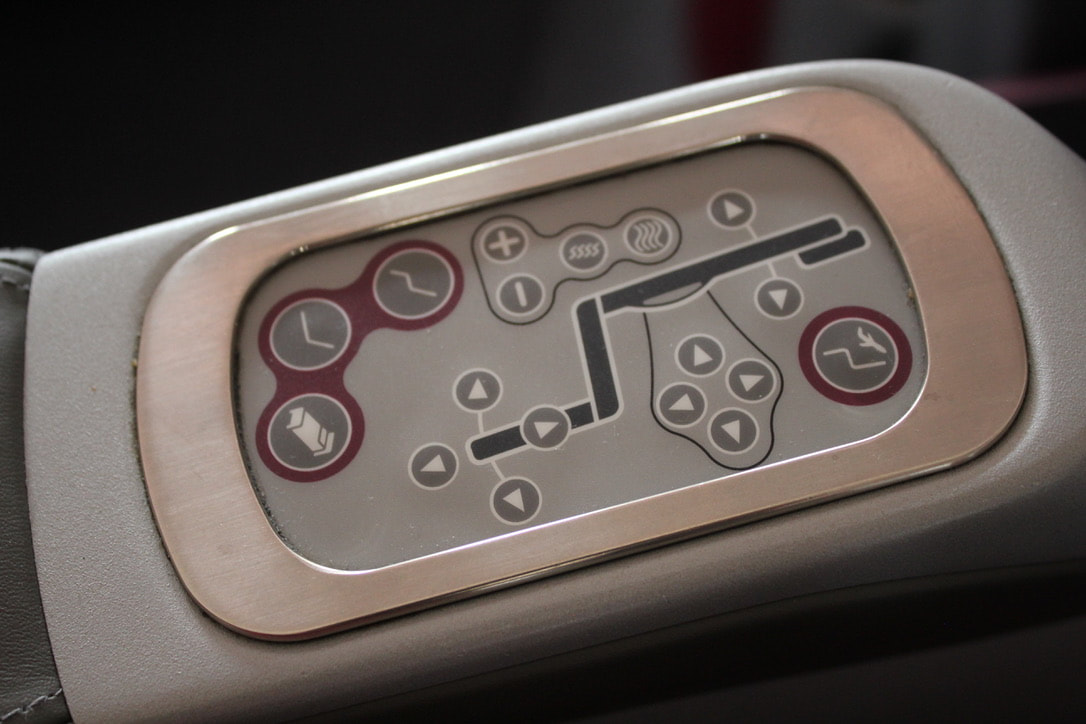 There was a little compartment next to my seat, opposite of all the buttons, where you could press a button and put two bottles of water - an Evian water bottle was already provided for me. In addition, I got a Giorgio Armani kit with an eye mask, ear plugs, after shave balm, floss, cologne, and a few other things! There was also some noise cancelling earphones in another compartment where there was a USB port. 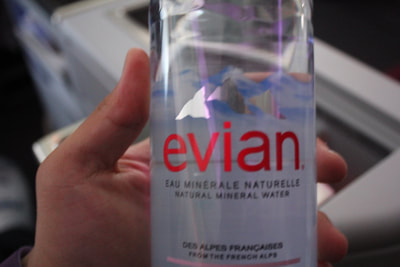 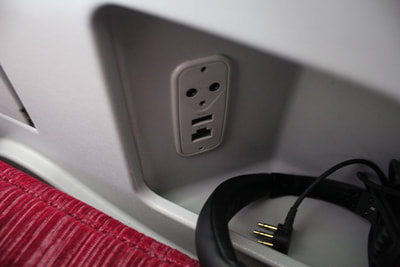 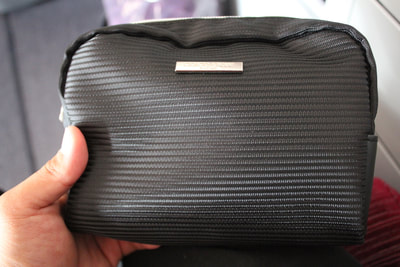 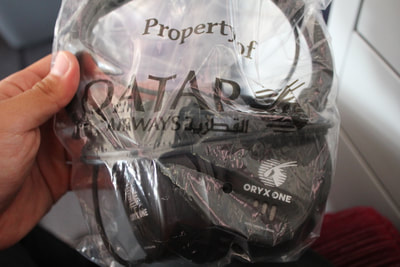 The controls to the entertainment system are under the armrest, and you could also pull out a little privacy divider between you and the seat next to you. There was also a reading light and a fold-out table in another compartment. 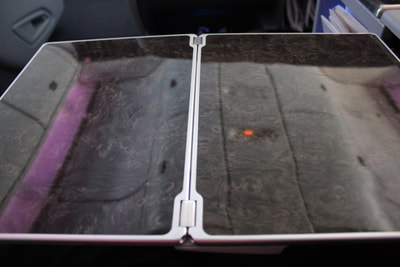 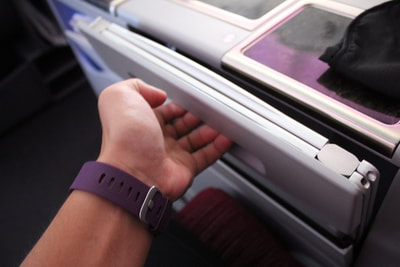 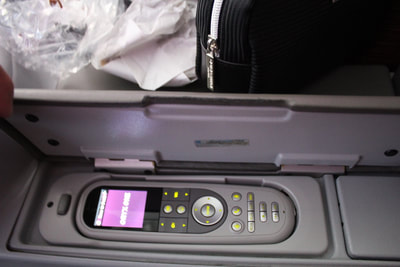 Right before takeoff, my assigned flight attendant came to me and asked when I wanted my meals. Apparently, all your meals can be served whenever you want, and you could order anything from their menu as much as you would like! This was mind-blowing because I wasn't used to having too many choices on an airplane, so I asked her to give me a moment while I looked over the drinks and food menu, which was quite extensive. 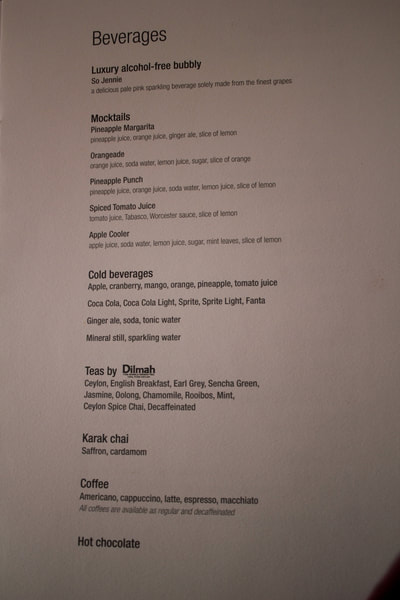 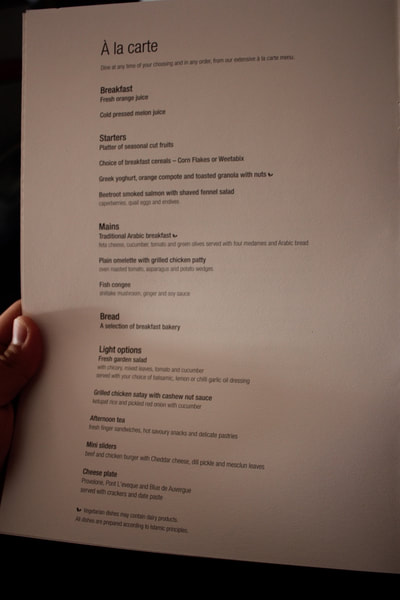 You could also get absolutely wasted if you wanted to because they had lots of wines, champagnes, etc. that you could also drink! I decided to ask for the Greek yogurt right after takeoff, the Arabian Breakfast mid way through, and the cheese plate right before we landed.

A little after takeoff, I decided to go to the bathroom and on the way, I could see that you could choose from a wide array of magazines. The inside of the bathroom was way nicer than what you would expect in Economy class. They had body mist and lotion, and you could even brush your teeth if you wanted! I noticed that every time I went in, it was immaculately clean. I had the suspicion that they were cleaning the bathroom every time after someone used it.
I noticed how throughout the flight, the service was simply beyond amazing. It wasn't that they were often checking up on me, but it was like every time I thought I wanted something, she would come over and ask if I needed anything. It was like the flight attendant was psychic! I never felt like I was being bothered, but at the same time I never needed to wait very long to get something.

When I came back from the bathroom, the flight attendant came by a little later to serve my yogurt. First, she gave me a napkin to put over myself, and then draped a similar small tablecloth to put over the foldable table. Then, she came with a side dish of different breads with various spreads, and set up my table with all the utensils and yogurt. I noticed how they put all the food in a very neat way in front of me. Also, they did this every single time they brought me food! Towards the end, I ended up having to refuse the bread at some point because I was so full.

First of all, everything they served me was amazing. It was something you would expect at a high-class restaurant but in an airplane. I finally understood part of the reason why Business Class is so expensive. Throughout the flight, I definitely ate a little more than I should but it was that good! 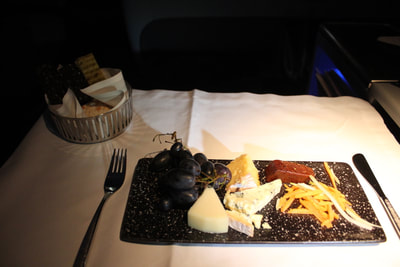 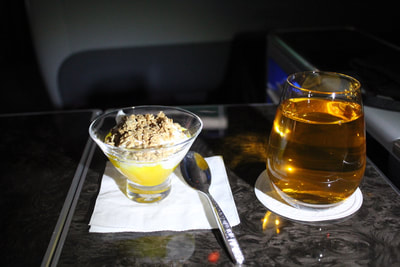 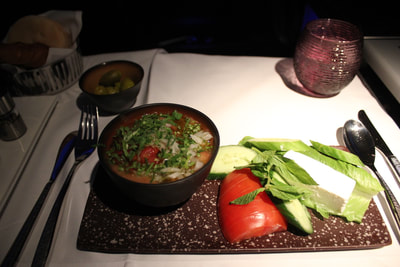 The yogurt I ate was so good that I actually got it twice. However, the best meal was the Arabian Breakfast, which is pictured on the far right. Everything was so rich and filling and it was the best meal I've ever had on a flight. The cheese plate also didn't disappoint. Everything was so good that I wanted to keep eating more but my stomach could simply not handle any more food!

In between meals, I slept in the bed even though I knew I shouldn't because of adjusting to the jet lag. Although the bed doesn't recline to a full 180 degrees (more like 170 ish), I felt like I was sleeping on an actual bed and it was actually comfortable to sleep in! I was glad I set alarms every few hours so I wouldn't forget to try the food. Otherwise, I would had actually been able to sleep through the entire flight. Even though I've gotten used to sleeping in uncomfortable positions on this vacation, it was so nice to being able to lie down and just sleep! Overall, I would say this was the best part of the flight, with the food coming in at a close second.

Before we landed, we were given a small hand towel (you could choose between warm or cold) and a small box of Godiva chocolates! Then, once we landed, we got off the plane before anyone else which was crazy to me because we essentially beat everyone to immigration and customs. 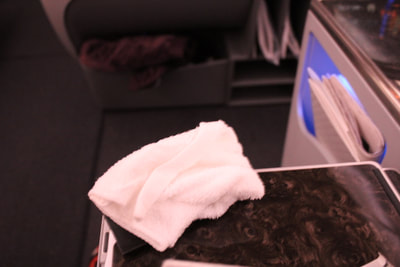 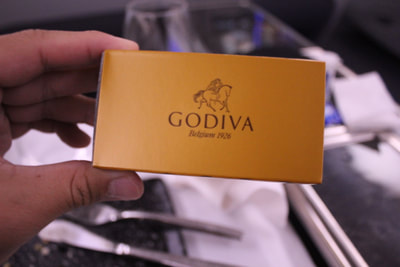 After this flight, I knew I would never look at Economy Class the same again - I've spoiled air travel for myself forever. It didn't help that my first experience was on Qatar Airways, which is one of the world's most highly rated airlines. Everything from start to finish was absolutely fantastic - from the service, to the meals, to the lie-down seat. I finally understood why people would choose to fly business class. However, in the future, this is something that I probably would never pay for again, except if I got upgraded through miles or if it was very cheap (which is unlikely).

I thought that the difference came down to the fact that in business class, you eat way better meals and can actually sleep properly. However, those are precisely the main complaints in international long-haul economy class flights - either people don't like the food or simply can't sleep comfortably. The difference is huge! However, I personally think that there is too much difference between the economy and business class price. But, if I earn enough money one day, I will definitely be back!
Proudly powered by Weebly