In my opinion, Shanghai is one of the most interesting cities in China that has a lot to offer. Good food, lots to do, and more. I definitely wished that I could have spent more time in Shanghai, and it didn't help that I missed my train from Guilin. However, I will say that you can see most of the sights in a day but you would want more time to avoid feeling rushed. For more information on traveling in China in general, please check the "Introduction" portion of my guide to Beijing.

I got into Shanghai Hongqiao Train Station after spending the entire day on a high-speed train from Guilin. I was incredibly tired even though I literally did nothing all day. Since Shanghai Hongqiao was the last stop on the train, everyone on the train got off and shuffled towards the exit.

I was incredibly hungry after sitting on the train all day, so I immediately went to a small restaurant and got a bowl of curry ramen - it was surprisingly good! Then, I headed towards the MRT to get to downtown Shanghai where my hostel was (The Phoenix). I went to the machine and bought a one-ride ticket (but I later bought a transportation card the next day at a counter in another station). The MRT in Shanghai is very clean and efficient. It was one of the best metro systems I've been on. After about 40 minutes, I got to my hostel, which was very close to People's Square, I was so exhausted that I got ready for bed very fast and then instantly fell asleep.

Since I lost half a day by missing my overnight train in Guilin, I got up super early to start exploring even though I was still feeling somewhat tired. But, I could always sleep later! So, I got up and walked towards People's Park and the surrounding square since it was very close to my hostel. On the way, I got some dumplings from a nearby stall for breakfast. I noticed that there wasn't too many people in the park which was nice, but I think I got a tad bit too early. But it was fine, as I was able to enjoy the park on its own. I ended up sitting on a bench to enjoy my dumplings when a man sat next to me and started some conversation. He was very nice but something smelled very fishy about why he would come talk to me. In the end, I ended up making up a lie to get away - I felt bad, but my gut told me he was up to no good. There was a fountain near the Shanghai Museum that had a mini water show that played along to music (similar to the water show at the Bellagio but on a smaller scale). Then, I walked by a lot of adults jogging and meditating to music - it was a very peaceful sight!
After walking around the park for a little bit, I started to head towards the Bund. I would recommend going during the day and at night, since the skyline looks completely different during different times. The skyline was very pretty! You have the water on one side, and old colonial-looking buildings on the other - it was definitely a must-see in my book. However, there was some fog that made it hard to see all the buildings across the water.
I started to walk towards ​Yu Garden but instead I stumbled onto Yuyuan Old Street, which is kind of like a huge, open pedestrian market which I wasn't expecting! There were lots of vendors selling food, little trinkets, and other things. I would have wanted to buy something, but I didn't have the space in my luggage. I eventually found this small food court upstairs in one of the buildings. You basically grab whatever looks good to you, and then you pay at the register per item. I think I got a little carried away here since everything looked so good. I ended up getting hot pot plus a few other things. It ended up tasting great, and it was cheap as well! 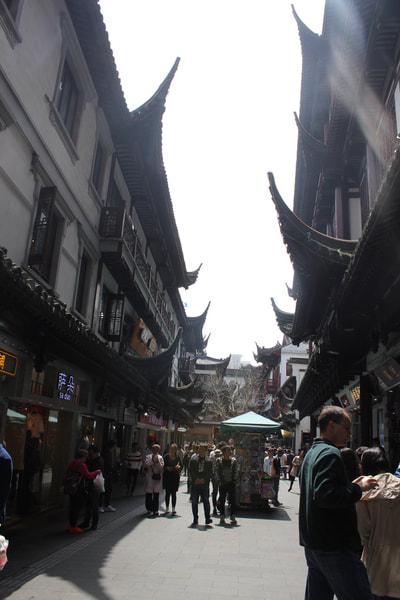 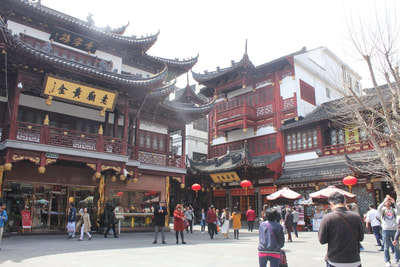 I eventually went into Yu Garden after paying the admission fee, and the garden was a work of art. It reminded me of a Japanese palace garden back during the samurai days. A lot of it was great to look at, and the way the small ponds and plants were positioned were very pretty to look at. Overall, you could easily spend at least half a day here and in the pedestrian street.
I started to head towards Jing'an Temple, which was a little further away than I was expecting, but it was very accessible via the metro. Initially, I had a hard time finding the actual temple and then I found the entrance. It costs 50 CNY to get in, and the temple is very impressive. You could see some people buying some incense and trying to toss a coin into the tower! I walked around the temple and took a rest for a little bit. I had made plans to meet up with my friend that was studying abroad at NYU Shanghai, and I was very excited since I haven't seen her in a while. 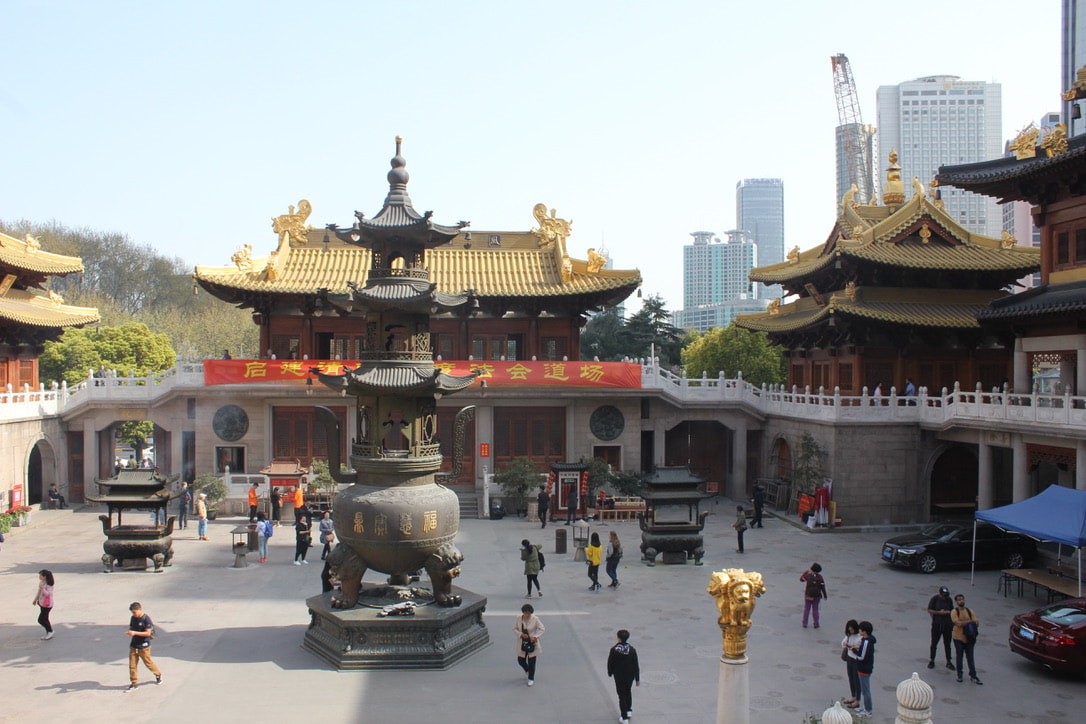 We were going to meet at Jiajia Soup Dumplings to eat dinner, and my friend told me to wait in line first because it might get crowded - and it turned out she was right. When I stood in line, there was a never-ending line of people standing behind me and I was glad I got here early. We ended up eating some dumplings and catching up. The dumplings were so good, I would definitely come back again. They have a little board over the register that indicates which dumplings are left. If you want a particular dumpling, make sure you come when they open!

After eating those dumplings, we went to Yang's to eat more dumplings which was also tasted really good. I haven't mastered the art of eating soup dumplings yet, so I was making a mess and embarrassing myself. But I wish I knew about this place earlier, because I could have stuffed myself with this goodness earlier in the day!

After that, we started walking towards Nanjing Road Pedestrian Street. This street is absolutely huge, which lots of small and big name brand stores, lots of food, etc. and it runs all the way to the Bund. We were on the search for boba, but we couldn't actually find it, which was a surprise! However, we did end up trying some Chinese yogurt (it tasted great!) and a green mochi thing that I can't remember the name of. Both of those things tasted amazing. Then, we walked toward the Bund to see the skyline at night and it was so Instagram-worthy. However, there are also lots of people trying to get pictures! Because we're both small people, we were able to squeeze our way to the front and get a nice picture. We ended up asking people to give us more space (anything for the photo, right?). After that, we parted ways since I had an early train the next day to Beijing, and I could not miss this train. So, I made my way towards the hostel, did some packing, and then fell asleep.

I got up at around 4:30am to finish packing, get myself organized for the day, and check out. I had to wake up the receptionist to check out, which I felt very bad - he obviously got the short end of the stick when being assigned shifts. I asked him where the best place to hail a taxi was (public transportation wasn't running this early) but he ended up calling a taxi to the hostel for me! This was really the first time that I've taken a taxi while solo-traveling, but it was a good experience! I mostly kept an eye on my GPS and zoned out for a bit, and the driver dropped me off at Hongqiao Station, where I was supposed to take a 7am high-speed train to Beijing.

I didn't get a good look at the station when I came to Shanghai, but even at 6am the station was filled with people, waiting for their trains. Not a lot of places were open this early, so I ended up buying a Taiwanese pork rice dish to eat on the train. Then, I went to wait near the assigned "gate". Eventually, we were called to board and get on our train.

The train I got on was a lot nicer than the previous two trains I sat on. There was plenty of leg room and the seats were set in a 3-3 configuration. There were a lot of foreigners that happened to be on the train. The train begin to leave the station, and holy moly, the train was fast - I think it hit around 300 km/hr at one point. America really needs to step it up. I ate my rice dish and then took a nap until we got to Beijing, where I had to catch a flight back to San Francisco.

I definitely recommend that you spend at least a few days in Shanghai - there's just so much to do! I wish I was able to stay here longer and spread out my Day 1 so I didn't feel so rushed. But nevertheless, I had a fantastic time while I was here and I will definitely be back!
Proudly powered by Weebly