Singapore was a city that I’ve always wanted to explore and I was really happy when I was able to work it into my trip. It's usually pretty pricey to fly here, so I was pretty excited. My visit was really short, but I felt like I was able to do a lot in a short period of time! In my opinion, Singapore is a very tourist-friendly city, where most people I met spoke English, it was relatively safe, and it was easy to get around.
​
The thing about Singapore is that you can’t do several things because they’re illegal: litter, chew gum, and not flush the toilet. Some punishments are more severe than others, so I would look into it if it’s something that concerns you because the city-state has strict laws. You don’t want to be detained while you're abroad!

I got into Changi Airport pretty early in the day, and started to make my way towards my accommodation. First, I stopped by The Jewel, which is the famous waterfall inside the airport! I had always heard how nice Changi Airport is, but I finally got the chance to see for myself. I could definitely see how they’re rated the #1 airport in the world! They have a lot of things for you to do and see, such as having a Butterfly Garden and having stationary bikes that power your devices.

The Jewel is a beautiful waterfall - even more beautiful than some waterfalls I’ve seen in nature. It’s in Terminal 1, and I would definitely make the trip out there even if your flight is in a different terminal. You almost forget that you’re in an airport for a moment, and it reminded me of a very small park. They also have trees inside and you kind of forget that you're in an airport.
​
Once I finished admiring the fountain, I made my way towards Terminal 2 to get on the metro. I bought the Singapore Tourist Pass for 2 days, because I figured that I would be using the metro a lot, and I was right about that. I came out ahead in terms of getting my money’s worth, but you have to decide if it’s worth it for you. 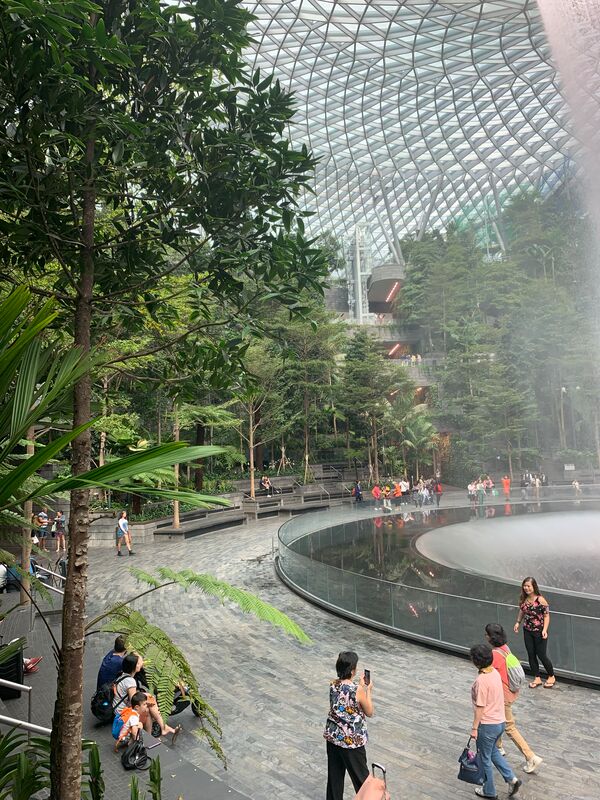 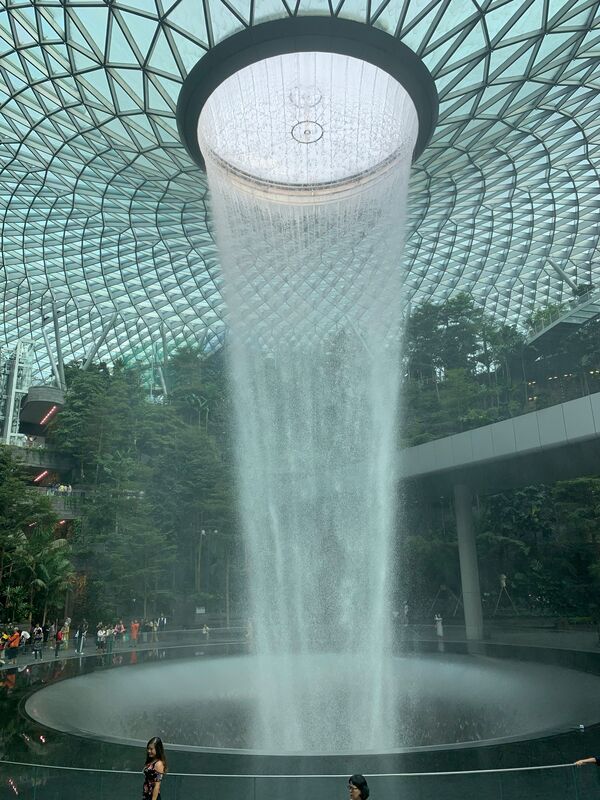 I had chose to stay at Marina Bay Sands, which is most definitely not in my typical budget range. I almost never spend that much money on accommodation, but I decided to treat myself this time around. I also really wanted to see the infinity pool! I ended up paying around $400 USD for my one night there, which is astronomically expensive (a nice hostel costs around $20+ USD in Singapore). However, $400 was on the cheaper side - I saw on the website that around the holidays, the nightly rate runs up to $800 SGD!

I went to check in, which went really smoothly - they just wanted to see my confirmation number and my passport. Then, they gave me a quick run-down of the hotel along with a free bottle of water. I got to my room and I was blown away at how nice it was. I got a Garden View room, so you could get a really nice view of the Gardens by the Bay if you go out on the little patio which was basically like a small outside living room with two small couches, a table, and a taller table. The curtains and lights could be controlled by buttons beside your bed and the bathroom was pretty big for a hotel room - overall I was blown away at how nice it was. But again, I don’t stay in $400/night hotel rooms often so I’m not sure how this room stacks up against rooms in other hotels.

After I got settled in my room, I decided to explore the infinity pool for a little bit. I recommend that when you go up, you wear one of the white robes that’s in your room along with the slippers to complete the “outfit”. You basically have to scan your key card to use the elevator to get halfway up and then transfer to a different set of elevators to take you up the rest of the way. When you get up, you’ll see that you’ll have to scan your key card to get through the turnstiles. An attendant is also manned there, and I assume they’re there to make sure people don’t sneak in. They provide towels, so you don’t have to bring one from your room.
​
When I stepped inside, I was blown away at how amazing the view was - it’s definitely the main selling point at the hotel. There are rows and rows of pool chairs, so even though there were a lot of people there you shouldn’t have a hard time finding a spot. However, there are a LOT of people at the pool, with most of them taking lots of pictures - so you might have to wait to get the perfect shot. You could also buy drinks and food while you're at the pool, but the hawker centers are way better for that.
When I went this time around, it was kind of cloudy so I told myself I’ll come back later when the view was better. Once I got back to my room and got dressed, then I went to Gardens by the Bay and Supertree Grove to walk around, and it was beautiful! It feels like you aren’t even in the city and the “supertrees” are impressive. I could’ve easily spent a whole day here just walking around and enjoying the greenery. I was supposed to meet a friend, so I started to make my way towards our meeting point via Merlion.
After walking around there, I went to Maxwell Food Centre to eat some food as I was very hungry. I was most excited to try the hawker centers while I was in Singapore because I’ve only heard good things about them! I went to a bunch of different stalls with my friend and tried a few different things: Kaya toast, Hainanese chicken rice and sugarcane juice. They were all super tasty and I could have easily went for seconds. Also, everything was reasonably priced! It doesn’t get better than that.
​
Once we finished our food, my friend and I started walking towards the area around Kampong Glam. On the way, we stopped by a random stall to try durian! It was my first time trying it, and I wasn’t the biggest fan. It just reminded me of runny scrambled eggs after you’ve left it out for too long, and it had somewhat of a slimy texture. Maybe I tried some bad durian, but I actually ended up giving the rest to my friend. At Kampong Glam, we walked around the area and saw Haji Lane and the Sultan Mosque. Seeing Haji Lane reminded me of all the street art I’ve seen in Melbourne. The mosque looked very imperial-like, but my friend and I didn’t go inside because we weren’t dressed appropriately. After walking for a little, we had to part ways and I headed towards Orchard Road. 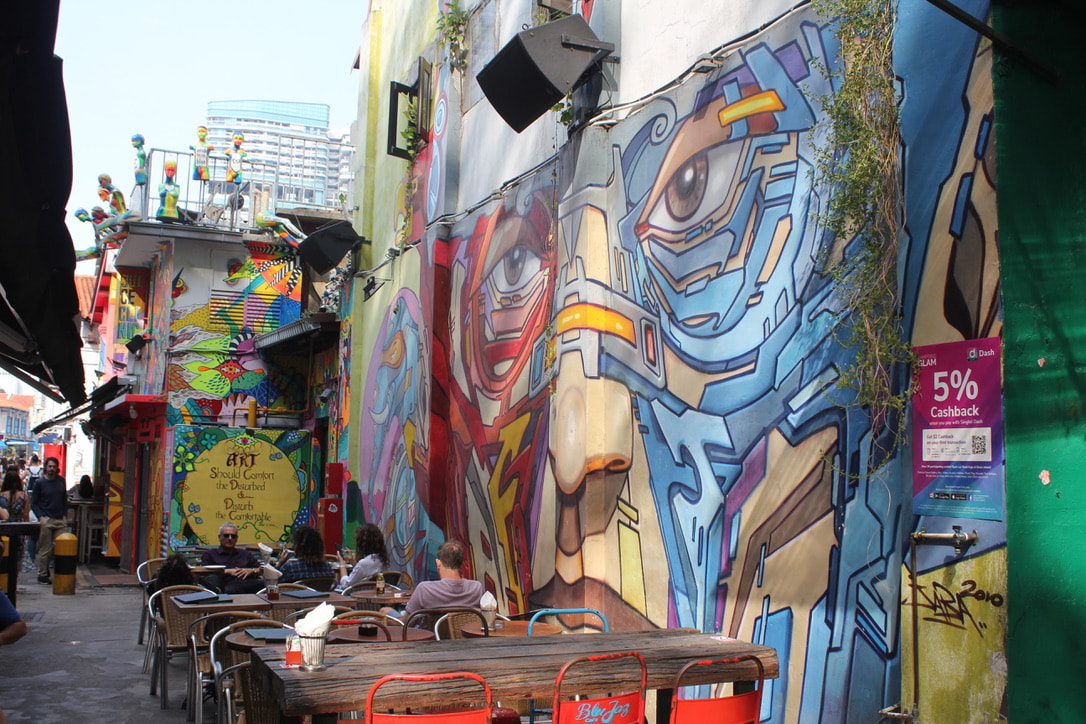 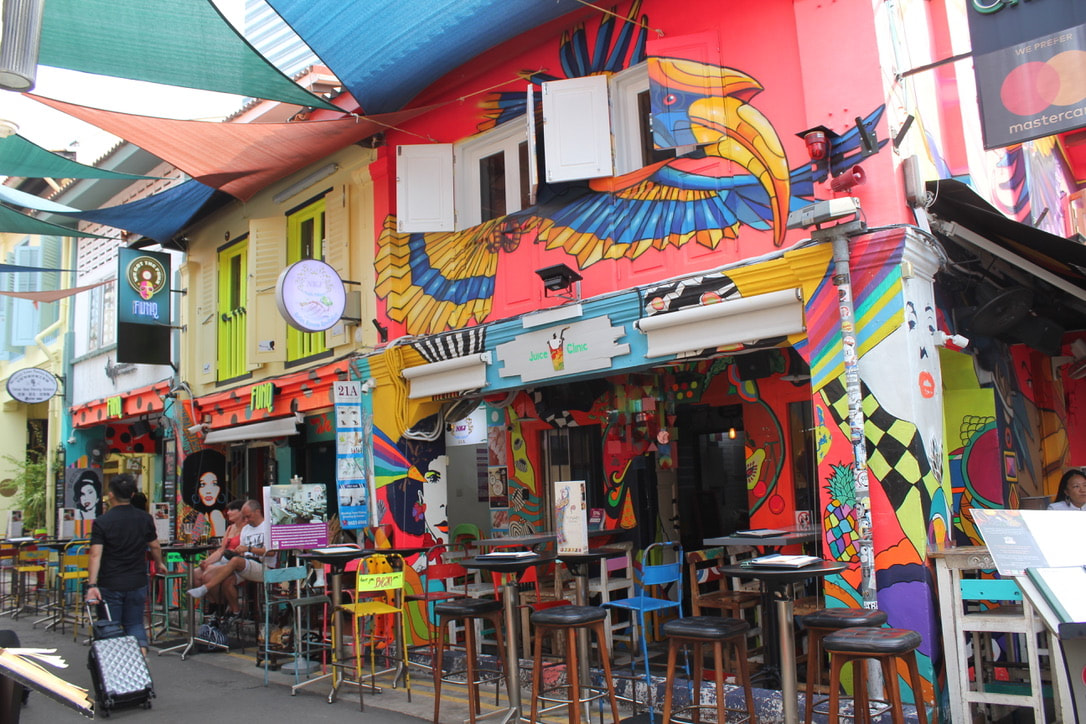 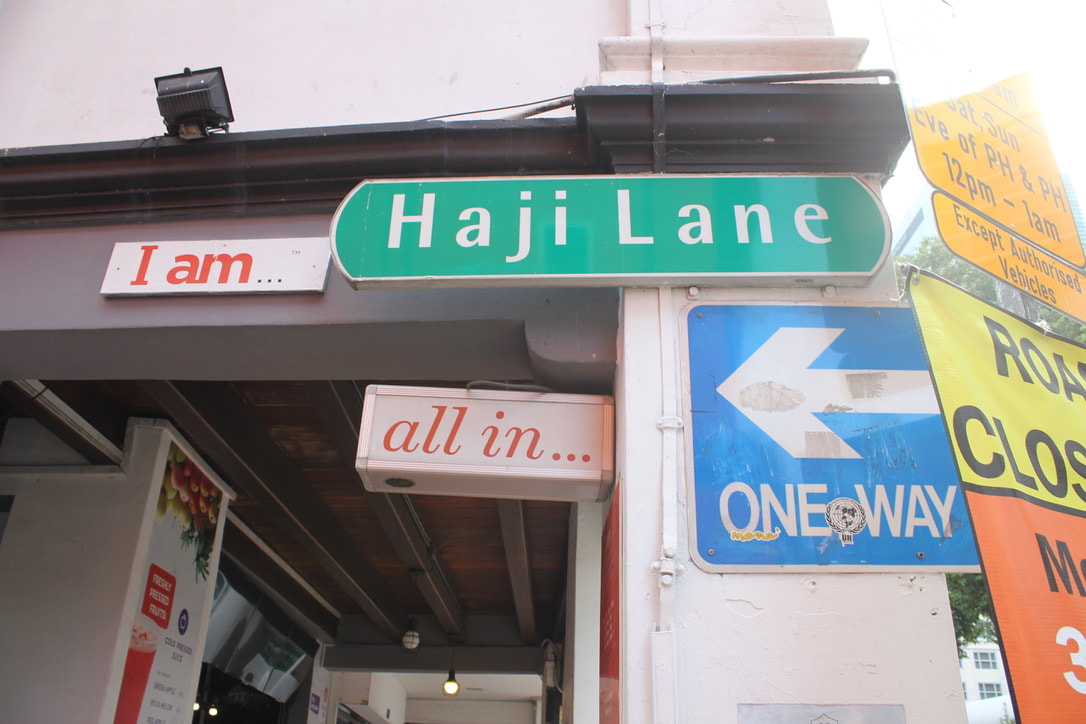 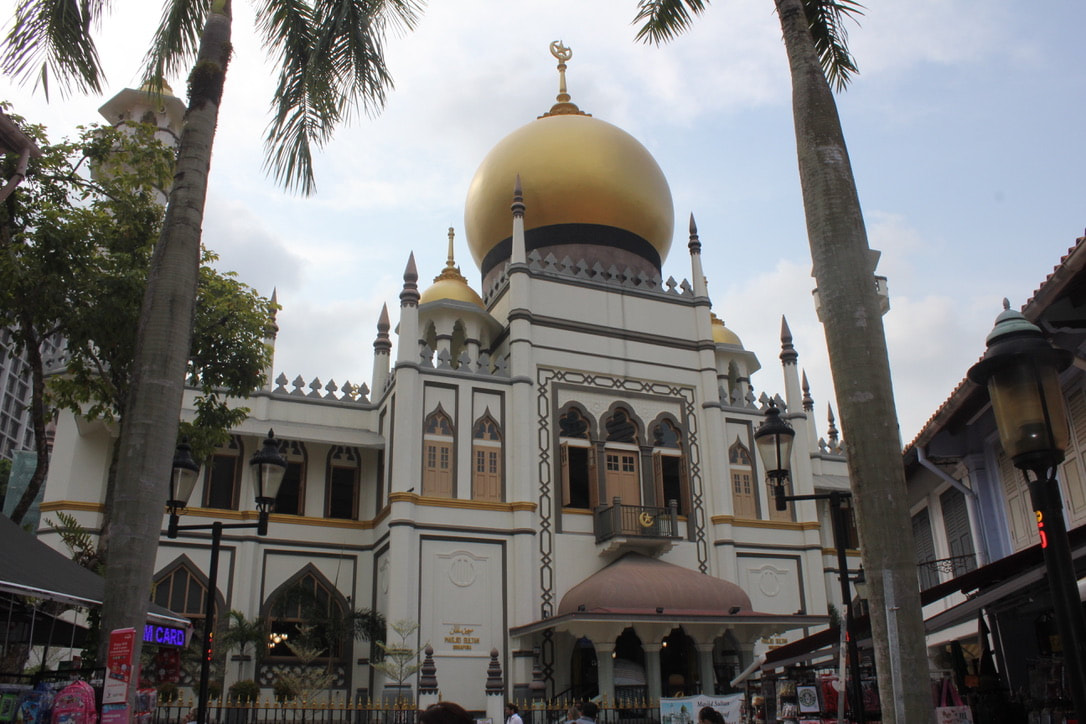 Orchard Road is mostly just a bunch of places to shop. I didn’t really buy anything because I had limited space in my carry-on. I would recommend going from one end to the other and using Dhoby Ghaut and Somerset MRT stations as endpoints. After doing some window shopping, I took the MRT to Lau Pa Sat Food Court, which had a huge selection of food! I ended up going to the Shi Hui Yuan stall and tried the hor fun (I forgot what I exactly got) but it was pretty good! After eating, I went back to my hotel and went up to the infinity pool for a few hours.

At night, the view of Singapore at night is pretty spectacular. Also, I got to see the fountain show right from the infinity pool (I had to boost myself up on the ledge to see the whole thing). However, it was also REALLY crowded during that time. So if you don’t want like crowds, I would try to visit earlier in the day. After taking in the view for a while, I went back up to my room and got ready for bed. 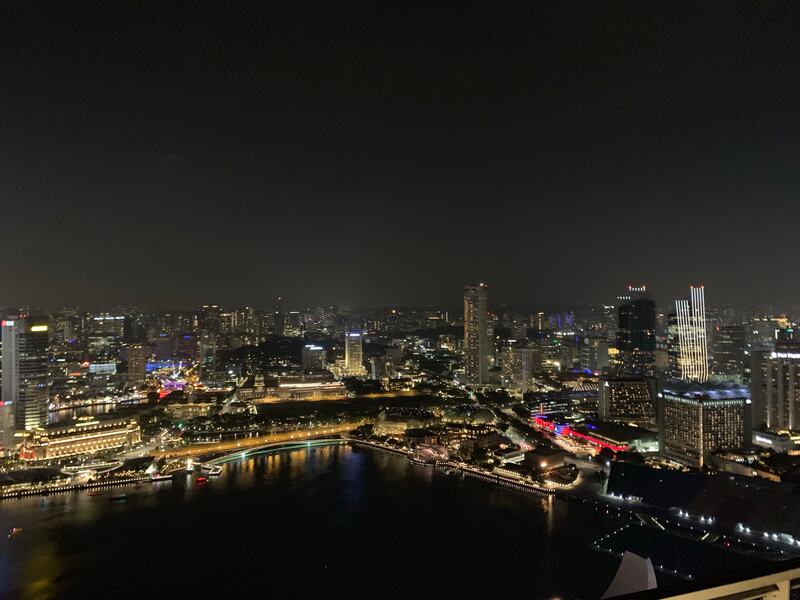 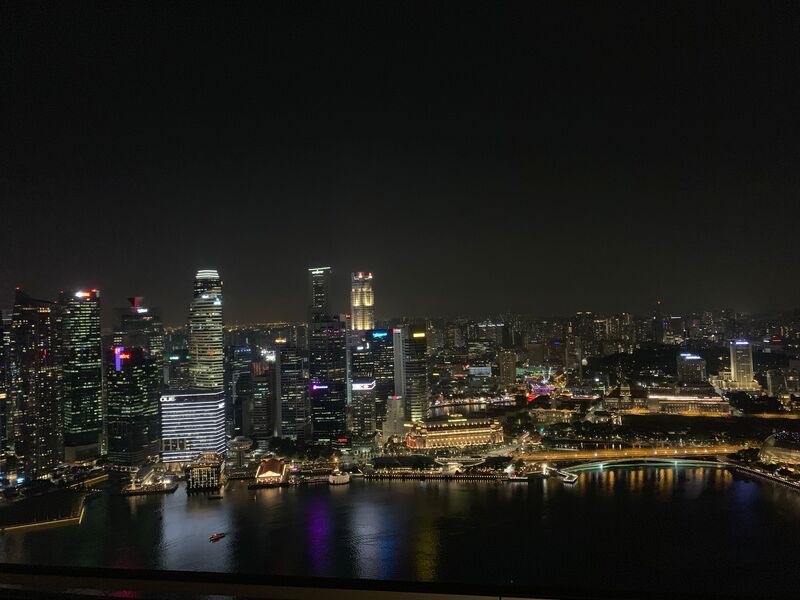 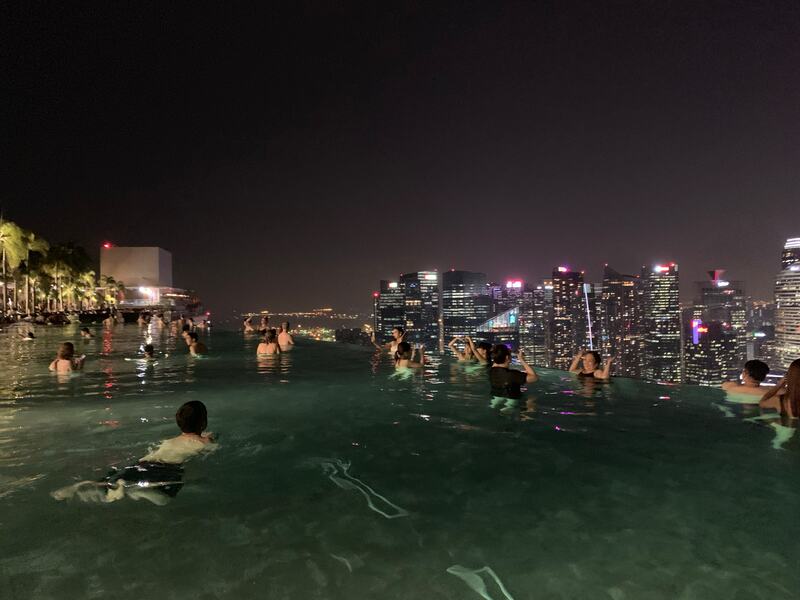 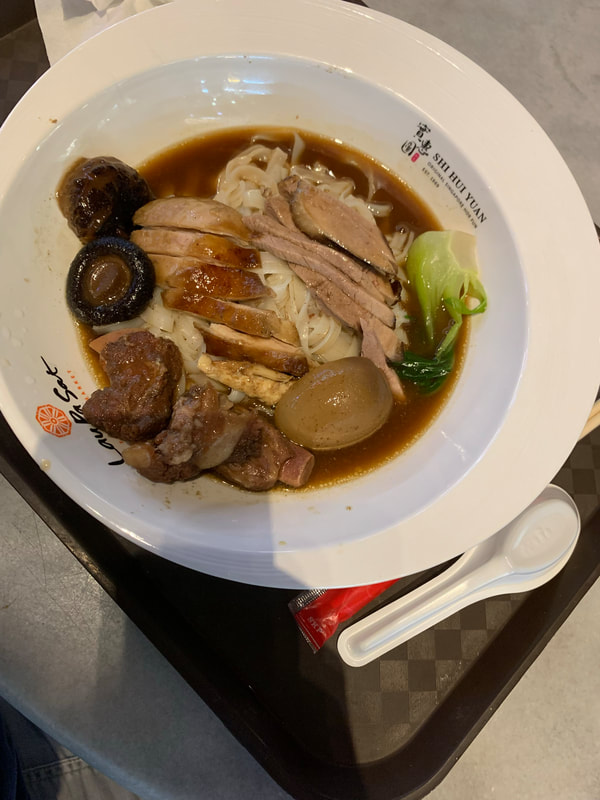 I woke up a little early to visit the infinity pool hoping that the clouds would clear in the morning - and it turns out I was right. There were still quite a few people there, but less than the number of people at night. I got a lot of good shots, which was nice! Then, I went back up to my room to pack up and check out. All you really need to do to check out is to drop your keys in a box, and then I left my bag at their luggage service for the day because I didn’t want to carry it around.
​
I made my way to Chinatown, where I went to Liao Fan Hawker Chan to try their Michelin star chicken rice. I heard good things about this place, so I was excited. I got in line right before a huge tour group got behind me but I didn’t wait for long. However, a huge line started to build while I was eating. Also, finding a spot to eat is also very challenging so you’ll have to be aggressive in saving your spot. I got the Soya Sauce Chicken Rice (their signature dish) along with a side of the Thai Style Tofu, both of which were fantastic! The tofu was a little spicy but not too much where I’m constantly drinking water.

After walking around in Chinatown for a little bit and taking in the atmosphere, I made my way towards Newton Food Centre to have some dessert. At this point, it started raining, so I just relaxed for a little bit. After the rain passed, I started to make my way towards Sentosa Island which was nice to see! I would recommend walking to the island itself vs. taking the little monorail that they have because the walk is nice. Also, going from the island to the Harbourfront Station (where the MRT is) is free, while going in the other direction will cost you money. I eventually made my way towards Palawan Beach and then back to the monorail stop, where I started to make my way towards Clarke Quay.
It wasn't too busy when I went because Clarke Quay is known for its nightlife. I got there at around 6pm where a few restaurants were opening. However, it was nice to take pictures of the area around the quay itself. After walking around through the whole thing, I went to pick up my bag and head towards the airport.
​
Before checking in, I went to the terminal’s Kopitiam to get dinner, which is just a food court. However, I think this is one of the best food courts I’ve ever been to at an airport solely because of the selection and price. Everything here was very reasonably priced and I was able to get a lot of food! I got a fried fish steam boat, carrot cake, and honeydew fen yuan for around $10 USD. That’s basically a 3 course meal and everything was very good. After eating, I went in to board my flight.

I would definitely come back to Singapore, hopefully with a local so I could try more food and see the local sights! I did a lot in a short period of time, and Singapore is very small to begin with but I feel like going for 3 days would be the perfect length. Until next time! 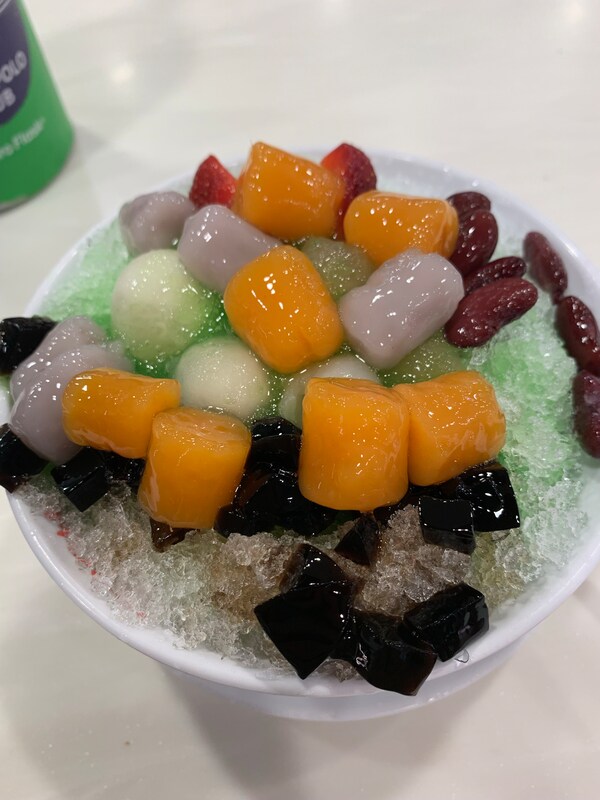 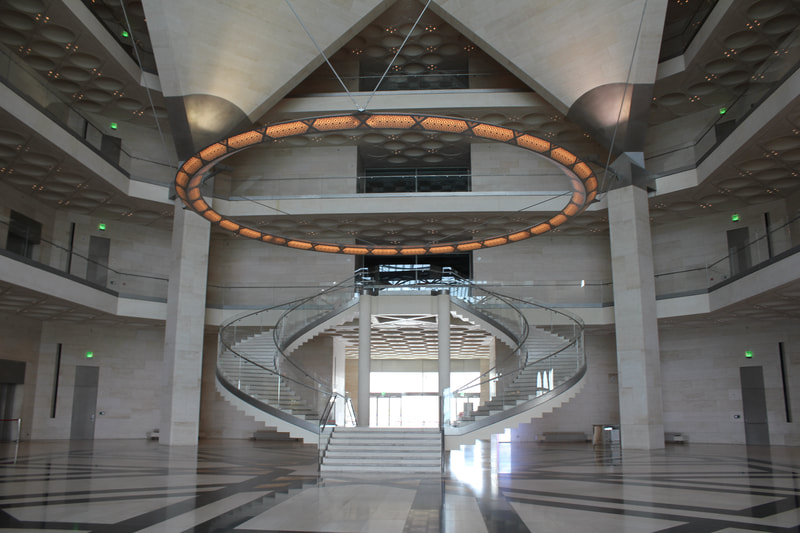 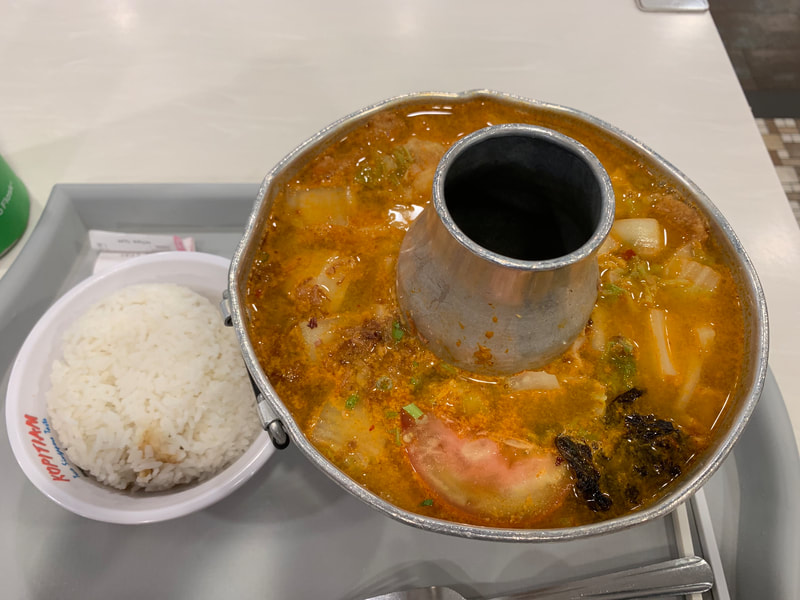