Toronto is a city that has impacted my life in a huge way - long story short, I was very close to transferring out of UCSB to the University of Toronto, but I chose not to transfer. Visiting Toronto was my way of getting some closure on my life-changing decision, but I also wanted to explore the area around it! I only had 2 days to explore the city, but I would definitely come back to visit after my trip here.

I flew into Toronto Pearson International Airport, which was one of the easier airports I've navigated. I had no problems getting past immigration and finding my way out of the airport. To get to the city center, you have multiple options. The fastest but pricier way is to take the UP Express, which goes to Union Station downtown in 25 minutes. However, I opted to take the subway, which is the cheaper option. I made sure to get a PRESTO card, which is a smart card you use to tap in and out of all transportation methods in the city (subway, bus, etc.).

The first place I went to was High Park, which is in between downtown Toronto and the airport. The park is huge and you could easily get lost in it for hours but I found it to be somewhat underwhelming. However, the garden architecture is very pretty, and there is a nice lake where you could faintly see the Toronto skyline - I found myself feeling very relaxed and one with nature. 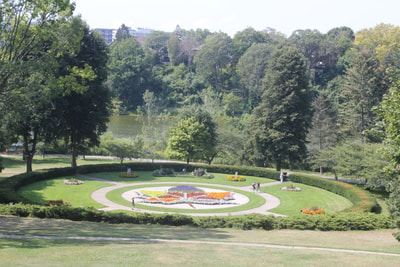 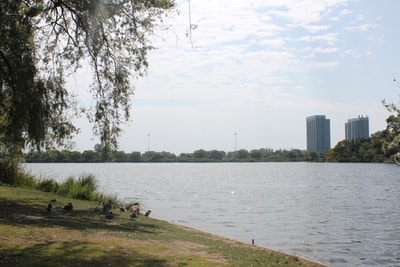 After visiting the park, I made my way towards the CN Tower, which is a huge tower in downtown with an observation deck. I decided to opt out of going all the way to the top, but you could definitely see that the tower is the tallest building in Toronto - just some very cool architecture to see.

Then, I went to the hostel I was staying at (The Clarence Park) to drop off my backpack and my duffel since it was getting really heavy on me. My room was very spacious with plenty of space to put my stuff down. My bed was comfortable, and there was even a sliding door that led to a small balcony! No complaints there. I took a small break, got refreshed again, and then I began to make my way towards the ​University of Toronto, St. George Campus.

Visiting the university was everything I imagined it to be - beautiful, vibrant, nice buildings but with a modern twist. I found myself getting lost in the buildings for a few hours, trying to imagine myself as a student here. I went to Woodsworth College (the college I was admitted to), the building where Rotman Commerce is, the main library, along with some of the residential halls. I would definitely recommend visiting the university just to see the buildings itself - they're absolutely stunning with a somewhat vintage vibe. The campus itself is quite spread out, so you can probably spend the whole day just exploring if you wanted to. My visit here was very reflective and solemn as I thought how my life would be different if I chose to transfer. 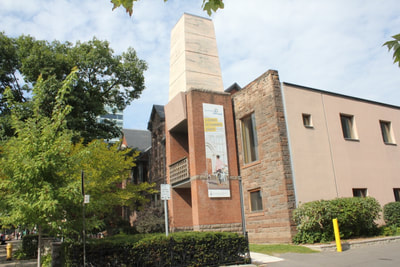 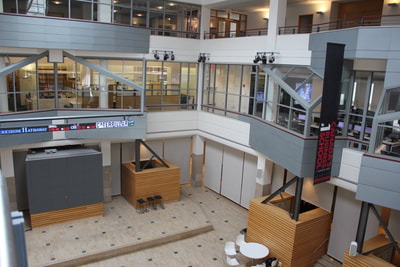 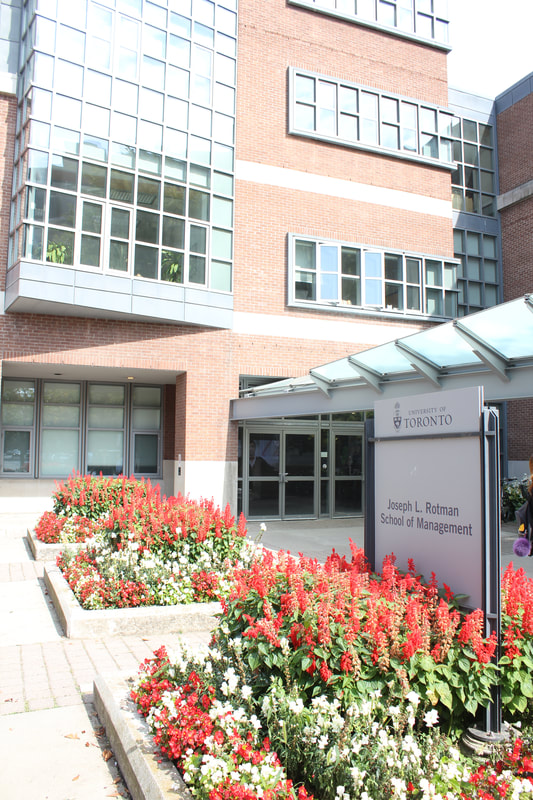 After visiting the university, I made my way towards St. Lawrence Market, which I found to have lots of great food options! I came later in the day, so a lot of stalls were closing. However, I was able to stop at Buster's Sea Cove and got fish and chips which were very good! There was a big line to order and now I know why. They had a lot of seafood options that I wanted to try but I didn't have the money to buy everything. After eating, I made my way towards Nathan Phillips Square, where they have the big Toronto sign. 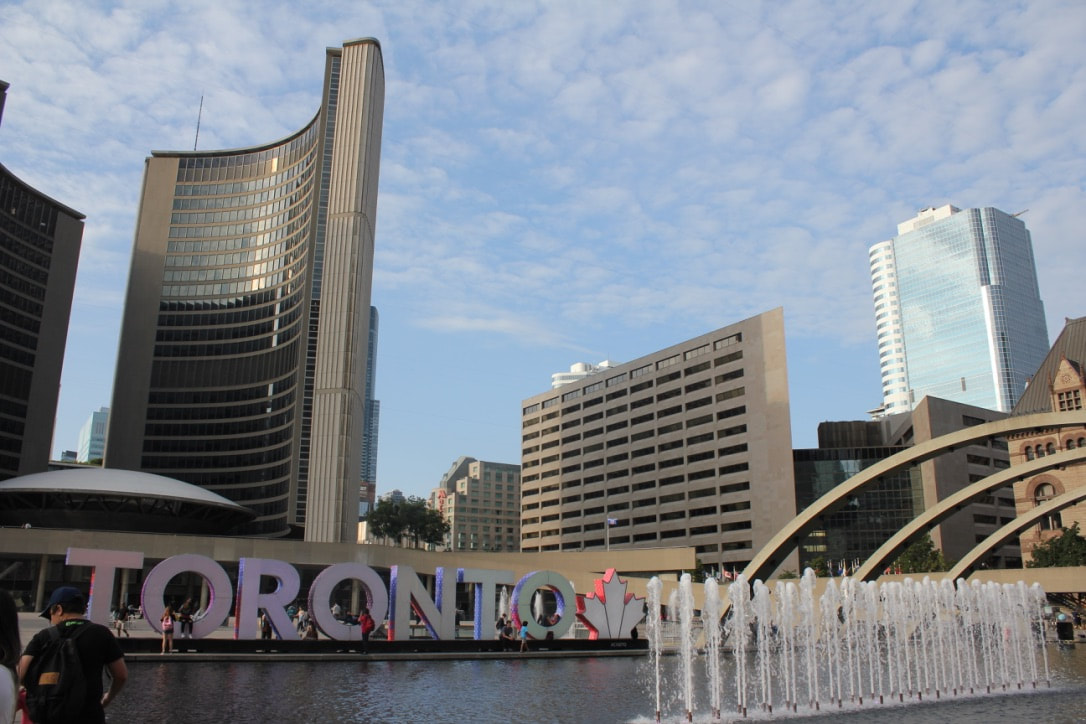 After taking a few pictures of the Toronto sign, I made my way towards Yonge-Dundas Square, which was very busy and had a lot of stores. I was looking forward to seeing some free music or film events, but they didn't have any on the day I went. I ended up walking into a random mall just to walk around and ended up getting some gelato at Froshburg Gelato - it was very tasty, but not over the moon amazing. After I finished my gelato, I made my way back to the hostel to get some rest. 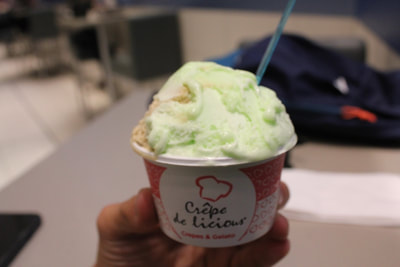 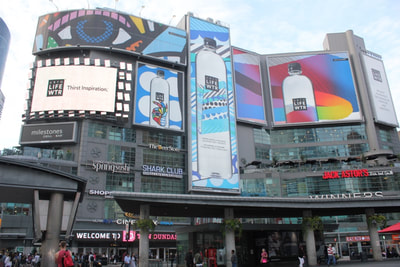 For my second day, my plan was to go to Niagara Falls for most of the day. I was looking forward to this a lot because I've always wanted to visit but I never really got the chance. I began my day by getting up very early and leaving my hostel at 6AM. I took an Uber to the bus terminal, where I put some of my things in a coin locker for the day. Then, I waited for my Greyhound to take me to Niagara Falls, which takes around 2.5 to 3 hours.

To get to Niagara Falls, you could also take a train. But in my opinion, the Greyhound was the cheapest and easiest way because if you took a train, you might need to transfer vs. the Greyhound just drops you off near Niagara Falls. Once the bus dropped me off, you could pay for a bus or a taxi to take to the general area around Niagara Falls. However, I opted to walk to the falls (around 30 minutes) to save some money. Even though my feet were sore at the end of the day, I was able to see how the locals near Niagara Falls live - there were lots of cute houses, and the walk was very nice. I would definitely recommend if you don't get tired easily. Otherwise, I would have taken an Uber.

The falls themselves are absolutely breathtaking. It's amazing how all the water falls every second but yet produces such a beautiful scene. If you visit Toronto and could only do one thing, you should go to Niagara Falls. The falls separate the American and Canadian border, which was kind of cool considering the fact that on the other side, I could see the American border. I took lots of pictures of the falls from all sorts of angles and I was just in awe for most of the time I was there. There are other side tours you could do for a fee, but I chose not to do those since I had to make sure that I could catch my bus back to Toronto. I took a little break at some point to get a bite to eat at Tim Horton's, get some water, and some postcards to send back home.

Then, I ended up making my way towards the Hornblower Cruise, which allows you to see the falls up close. The tour cost me about $24 USD, which I think was well spent. Basically, they give you a poncho and load you on the boat, and then you're off! Just a warning, you WILL get wet, so make sure you wear the poncho and hide any valuables so they don't get wet. I ended up just using my iPhone to take pictures because I didn't want my camera to get wet. On the middle of the cruise, you stop at Horseshoe Falls, which is part of Niagara Falls and is incredibly breathtaking. The whole tour in general was such a surreal experience and one I can't highly recommend enough. If you come in from the American side, the tour equivalent is called Maid of the Mist.
After the tour, it was time for me to go back to the bus terminal. For a change of pace, I decided to walk through where all the hotels were. Walking through this area reminded me of a very trashy version of Las Vegas, where there are flashing lights and signs trying you to enjoy lots of rides and such - which I think isn't in the spirit of Niagara Falls. But, I was able to make it to my bus and go back to Toronto.

Before turning in for the day, I decided to walk by Kensington Market. I was surprised there wasn't many stalls, but later my friend told me that the market is most active on the weekends and I was there on a Wednesday - oops! However, there were still lots of people and I know that if I came on another day, it would have been very lively. For dinner, I decided to eat at PanPan Noodle Bar. This is a place I specifically sought out because of a video I saw on Facebook of the restaurant. Everything in the video looked amazing, so I decided to mark it down and I have no regrets. Everything I had was absolutely amazing. I got the Golden Stick Sushi and the Sticky Rice Crepe and both did not disappoint. The restaurant seemed to be up-and-coming as it seemed fairly new, and my server was very attentive. Overall, I would say you should definitely stop by if you have the chance! Just a note, it's on the second floor so you'll have to look for some signs telling you to walk up the stairs.

After I ate, I went back to my hostel to rest since it was a long day and I had an early flight the next day.

*** If you have the time, I would highly recommend going to Casa Loma - pictures of the place looked amazing! *** 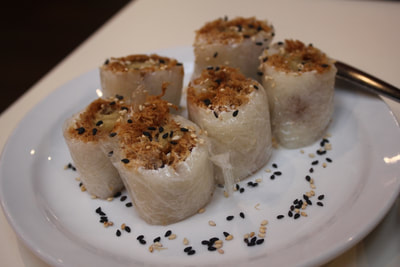 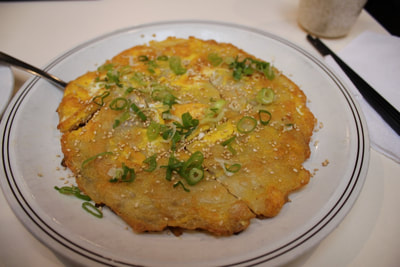