When I was looking at booking a flight to Melbourne, I was surprised that United offered nonstop service to Melbourne. Usually, Qantas and Virgin Australia have a monopoly on any US routes bound to Australia. However, more and more airlines are launching routes to Australia which is increasing competition.

I booked a round-trip ticket for about $536, which is dirt cheap for a nonstop round-trip flight to Australia from the US. I didn’t think a deal as good as this one would come around in a while, so I snatched it up instantly. Usually round-trip tickets are around $1000 USD!

I was kind of excited to take this flight because it was around 16 hours and the longest flight I had previously been on was around 14 hours. Also, the aircraft was a Boeing 787-9 Dreamliner, which is one of my favorite planes to fly with. The Dreamline is supposed to utilize mood lighting and tinted windows to make you feel better once you land, which I’ve found to be somewhat true. Plus, the aircraft looks pretty sleek.

Before the Flight: United Club

I got off work and drove straight to Los Angeles International Airport to catch my flight. After parking, getting to the airport itself, checking in, and going through security, I decided to try out the United Club. I got a few one-time passes from my United MileagePlus Explorer Card, so I thought might as well try it out.

I did some research beforehand and I read that United recently redid the lounge at LAX and was supposed to be one of the best in the nation. When I stepped inside, it exceeded my expectations. The lounge is pretty big with lots of seating throughout the club. Almost every single seat had accessibility to an outlet. Even though there was a lot of people in the lounge, I was able to find a spot pretty easily. Also, it has a classy modern look. 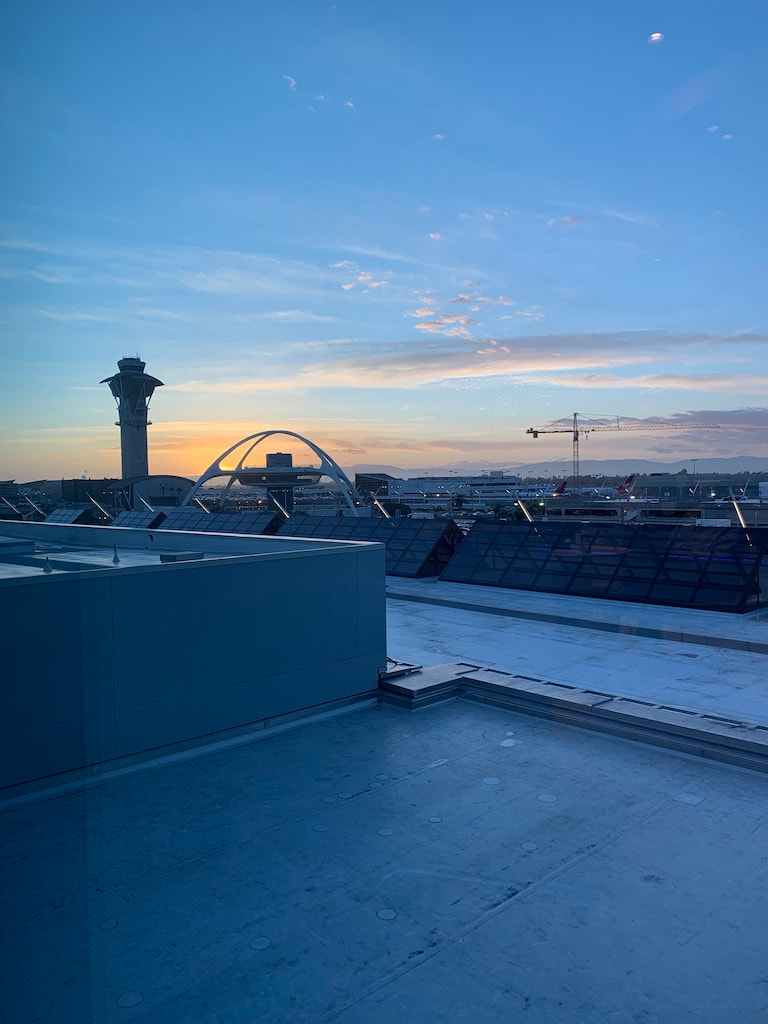 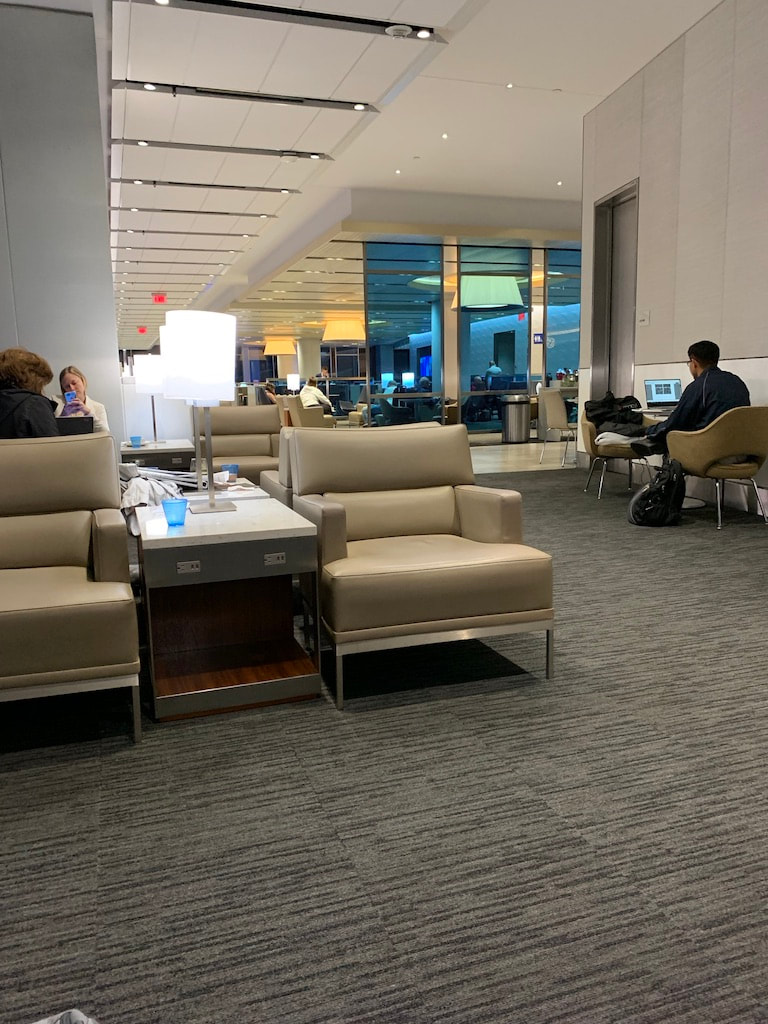 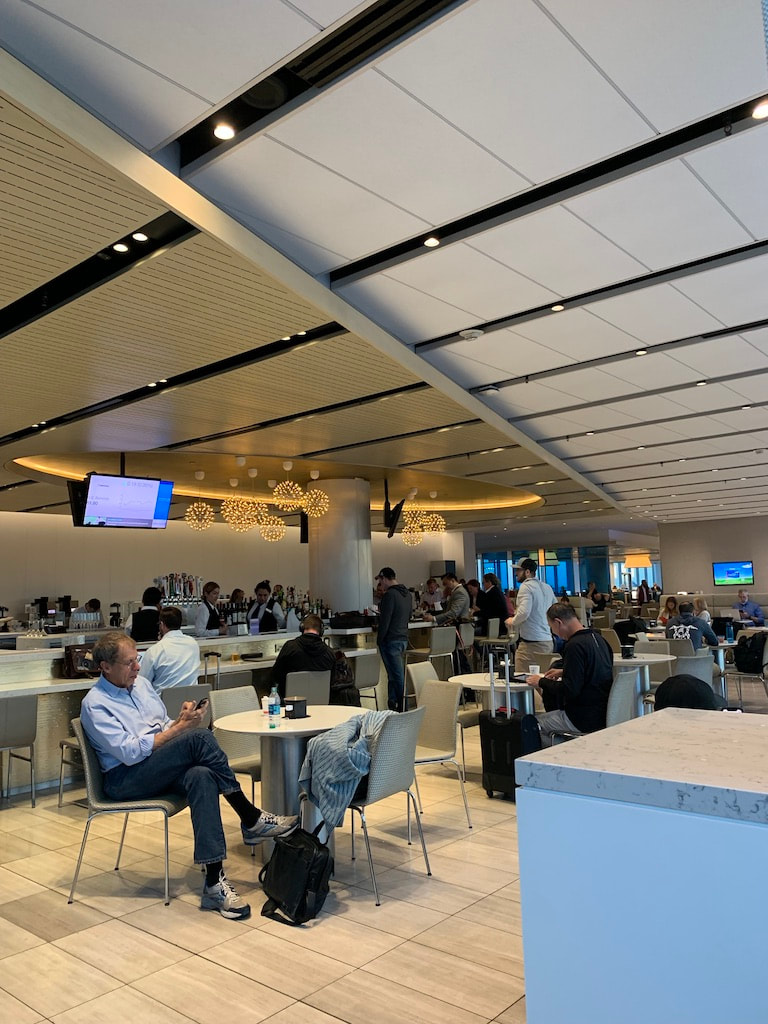 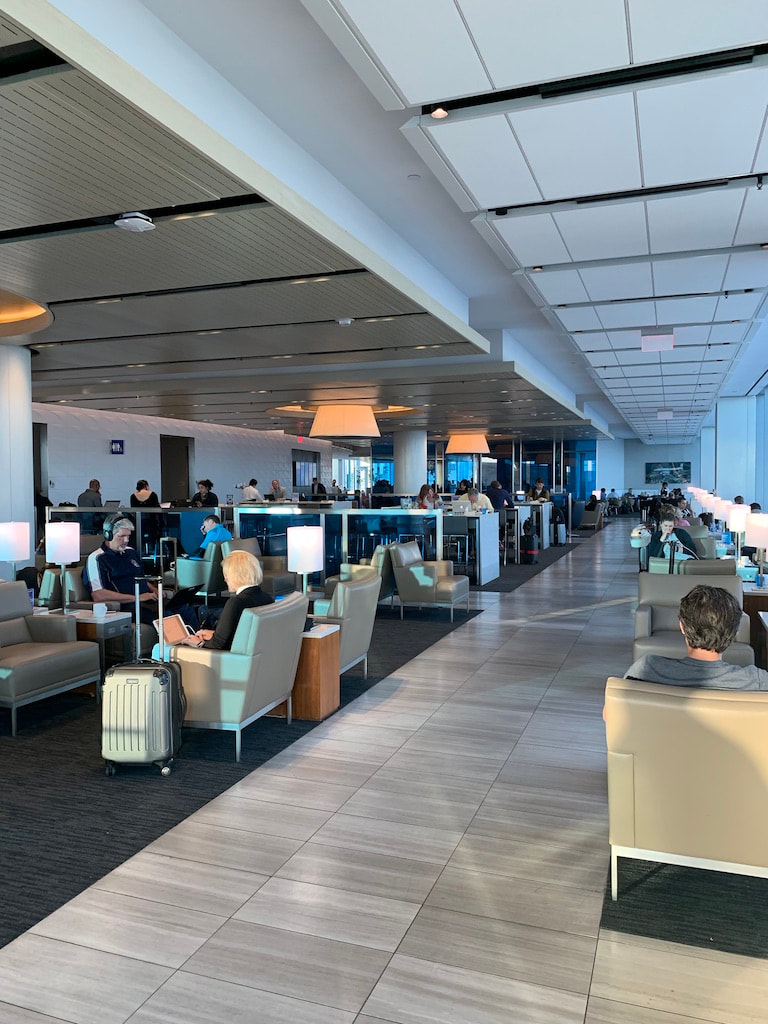 You can get free drinks at the bar, but you have to pay for others. There’s a section where you can serve yourself some food, a coffee machine that has a lot of functions, fruit and flavored water, etc. I was surprised at all the options that were offered.

I was surprised at the food because I expected it to be nothing special. They had a small taco bar, udon noodles, miso soup, a small salad bar, and brownies/cookies. I wanted to get my money’s worth, so I tried everything. I thought that for an airport lounge, the food wasn’t bad at all. The miso soup was a little salty for my taste, but the DIY tacos were excellent – you could put avocado, shredded chicken, lettuce, etc. onto the taco.

I tried to move from spot to spot to get different perspectives of the lounge. I ended up just going on my phone most of the time until my flight was about to board. Before I left, I used the bathroom that was inside the lounge and then went on my way.

I would have to say that the lounge was excellent with ample seating, free Wi-Fi, and good food selection. However, I think that the sticker price is kind of steep for just a one-time use. If I was on a long layover in an airport that was very crowded with limited comfortable seats without outlets, that might make me pay for the lounge. But in any normal circumstance, I would just wait at my gate. However, if you find yourself given the opportunity to go in, I would definitely take it. 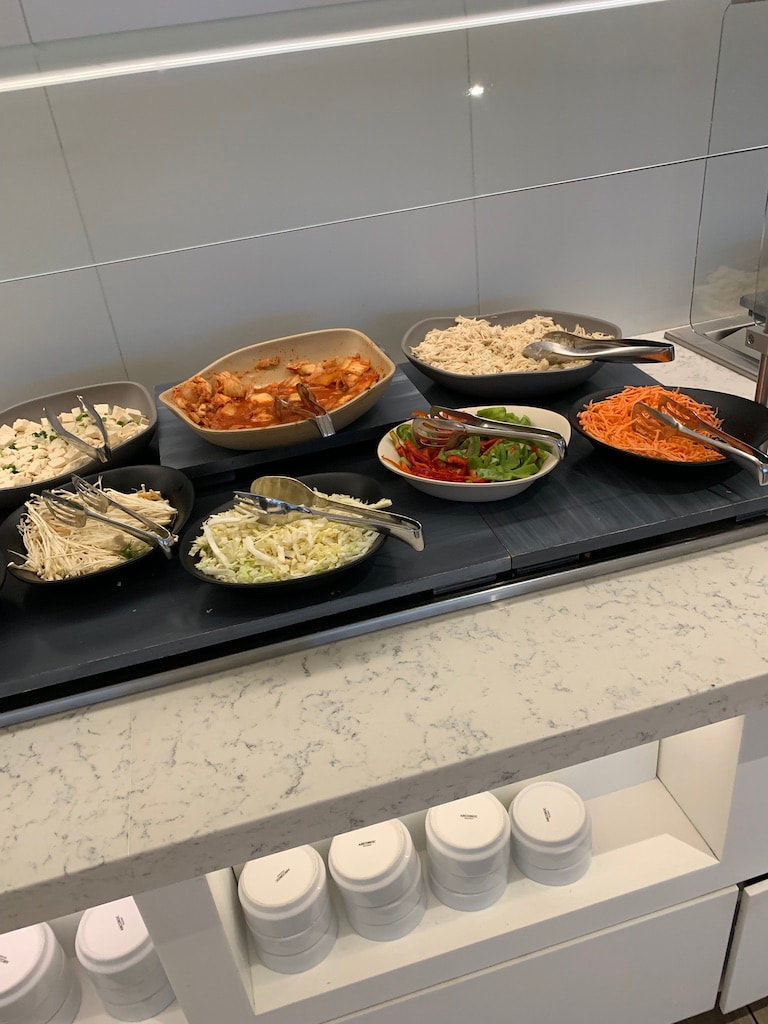 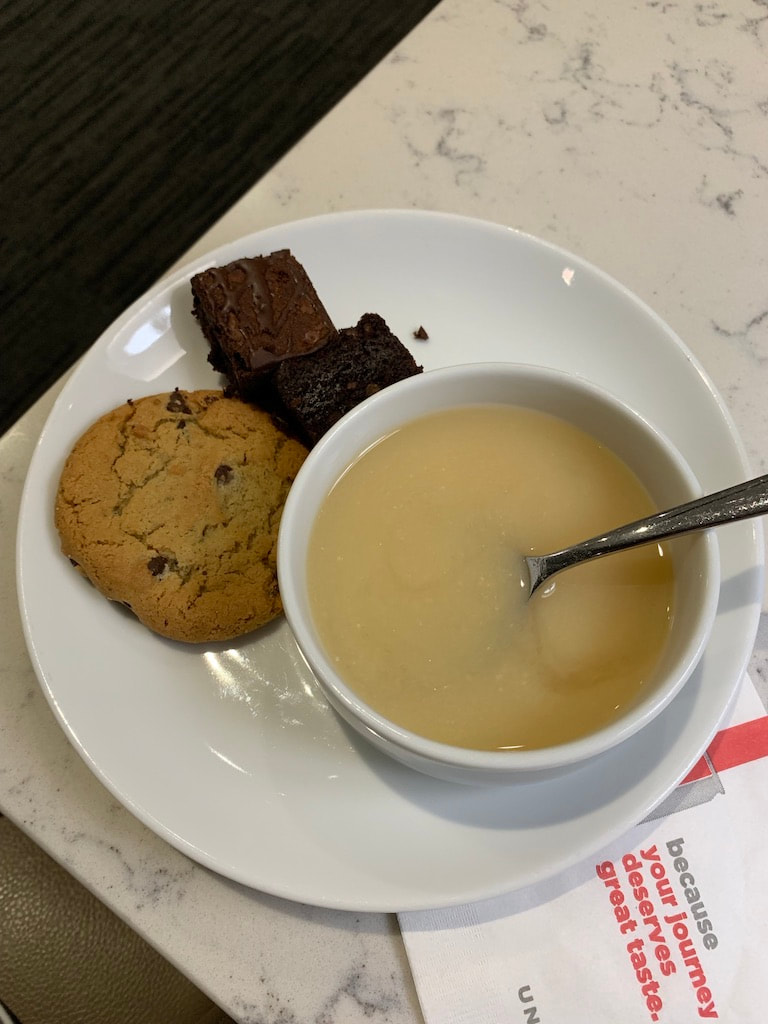 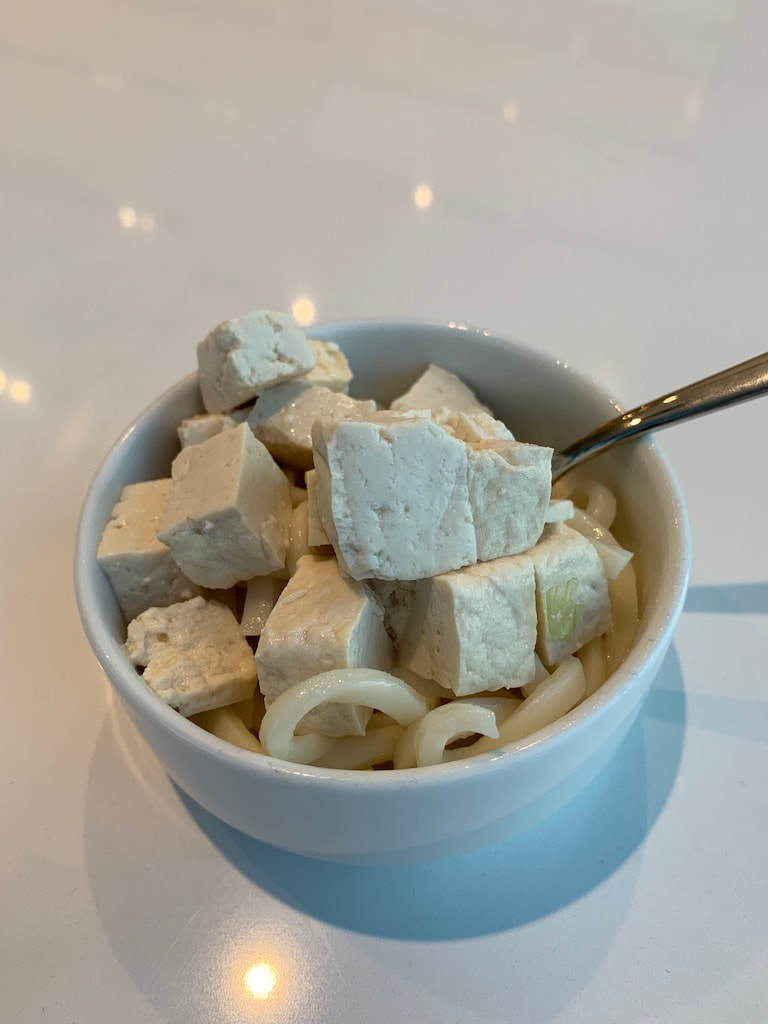 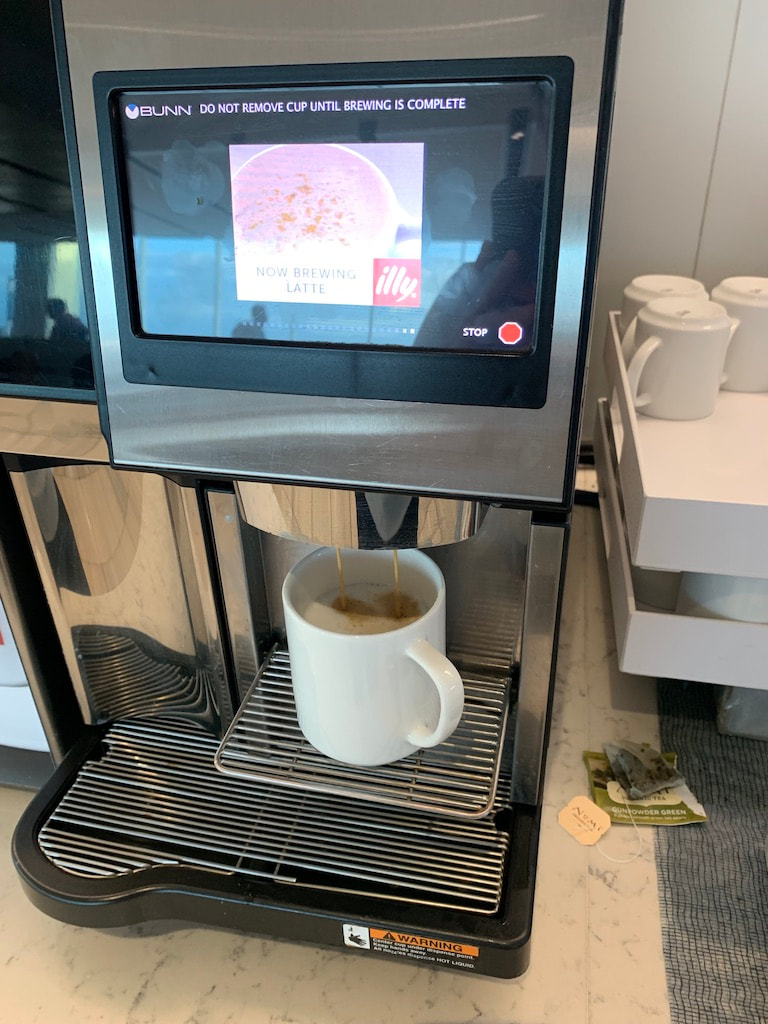 A few days before, I got an email from United saying I was upgraded to Economy Plus for free, which was a pleasant surprise. More legroom on a long flight is never a bad thing, so I couldn’t complain. With my United credit card, I was scheduled to board with Group 2. Boarding went relatively smoothly. But, I was very glad my credit card came with priority boarding because a lot of people boarded with me and I was worried about overhead bin space.
Any airline you’re flying on that’s using the Dreamliner is on the better end. There was ample leg room in Economy Plus, which was nice. I flew in regular Economy on the way back and I thought the difference in leg room was marginal (probably because I’m short). I personally wouldn’t pay for the upgrade, but it might make a difference if you’re very tall. 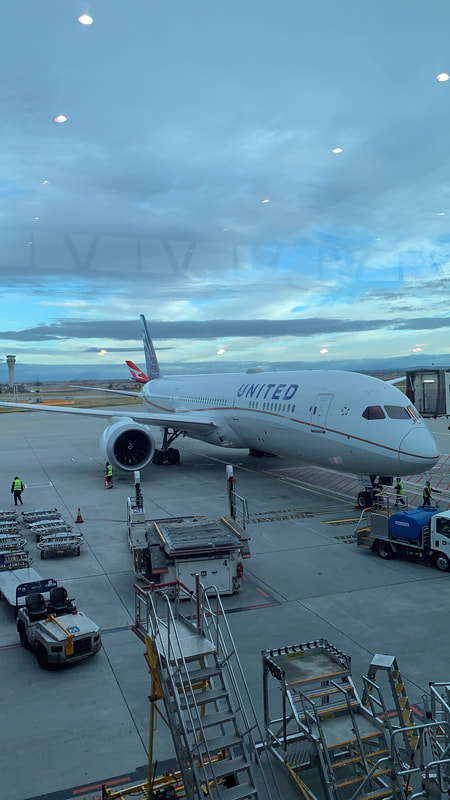 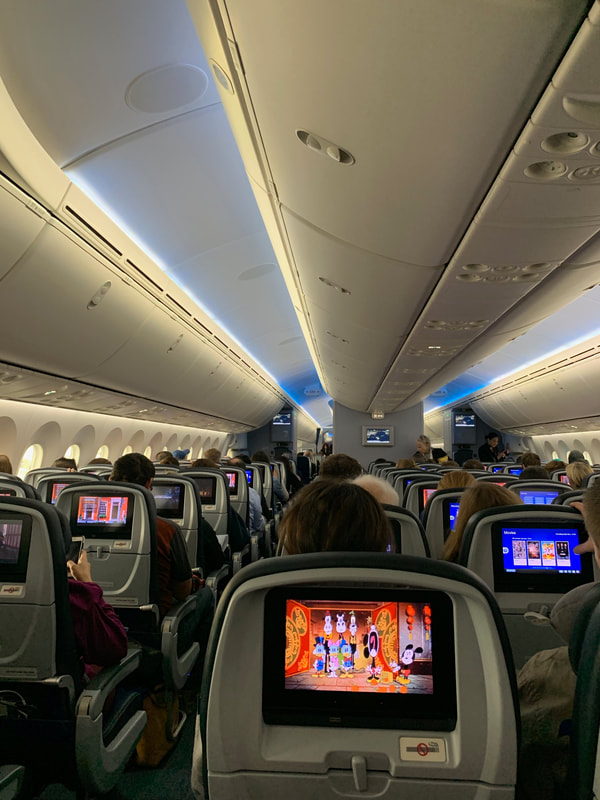 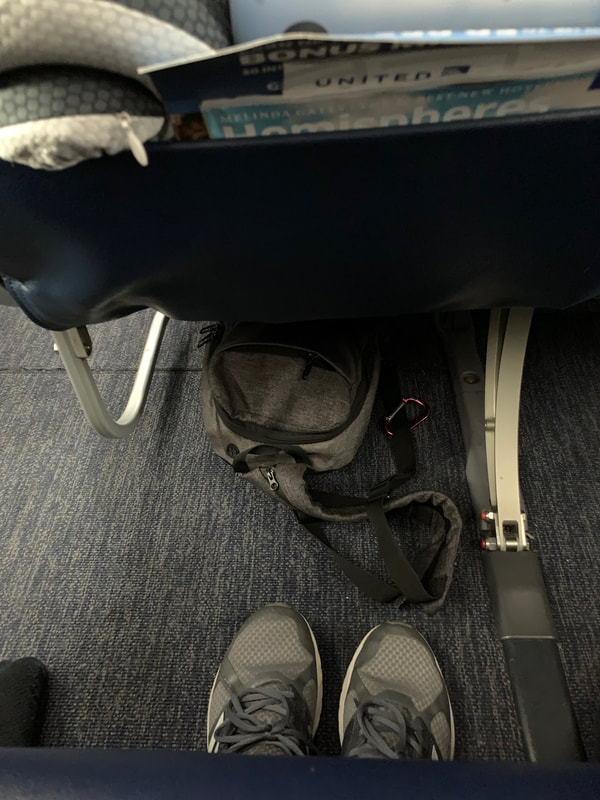 The aircraft had a nice in-flight entertainment (IFE) system where I could plug in my earphones along with a USB slot to charge my phone. There was a pillow and a blanket in shrink wrap, which is pretty standard. Nothing too impressive so far, but I would have liked the tray to be bigger and be able to be extended towards me more. My huge Herschel duffel bag fit in the overhead compartment nicely. However, on the return flight to LA, I was sitting in the back row (40) and the overhead bins around there were for “crew only” – so if you get a seat in this area, you might want to board as early as you can so your bags won’t be too far away from you.

The flight took off relatively smoothly, and they began a dinner service shortly after take-off. The choices were “chicken” or “pasta”, which seemed very cryptic. I decided to get the pasta on the outbound to Melbourne and the chicken on the return to LA. The meal was served with some sort of bread, some grain salad, and then the entrée itself. The pasta was basically a few pieces of ravioli, while the chicken reminded me of something from Panda Express. Neither meal was spectacular, but I liked the chicken better. 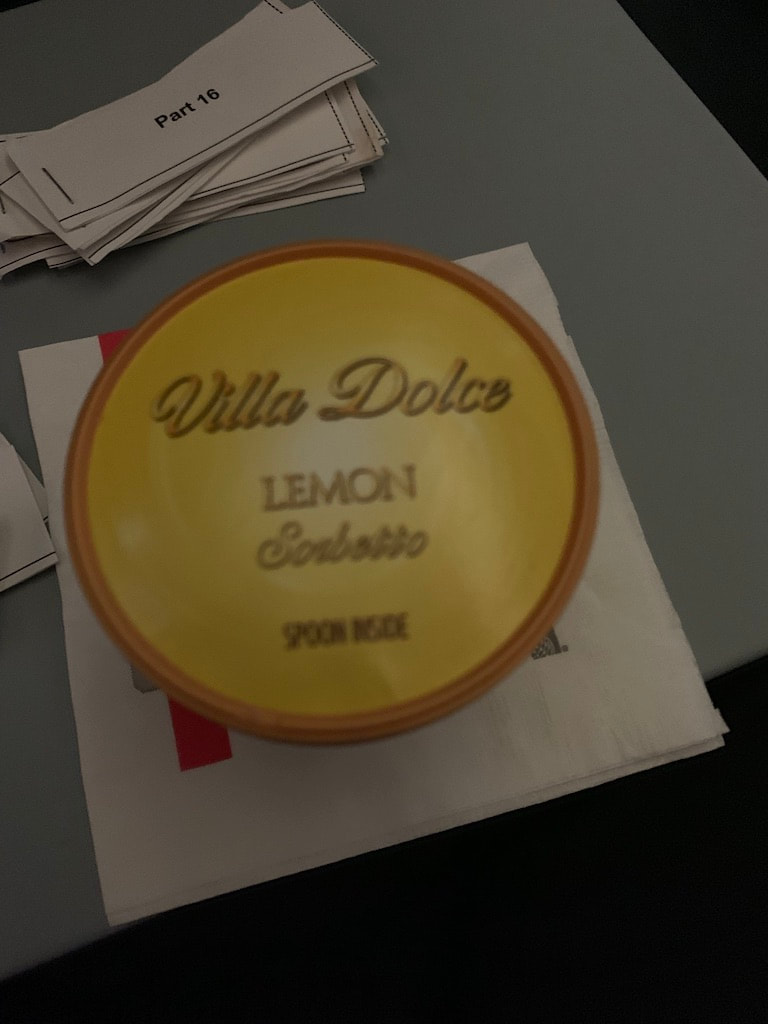 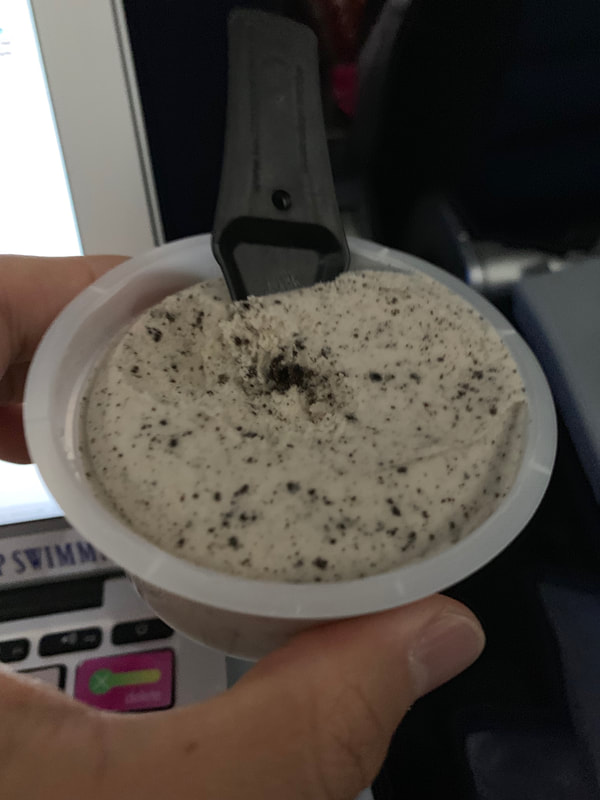 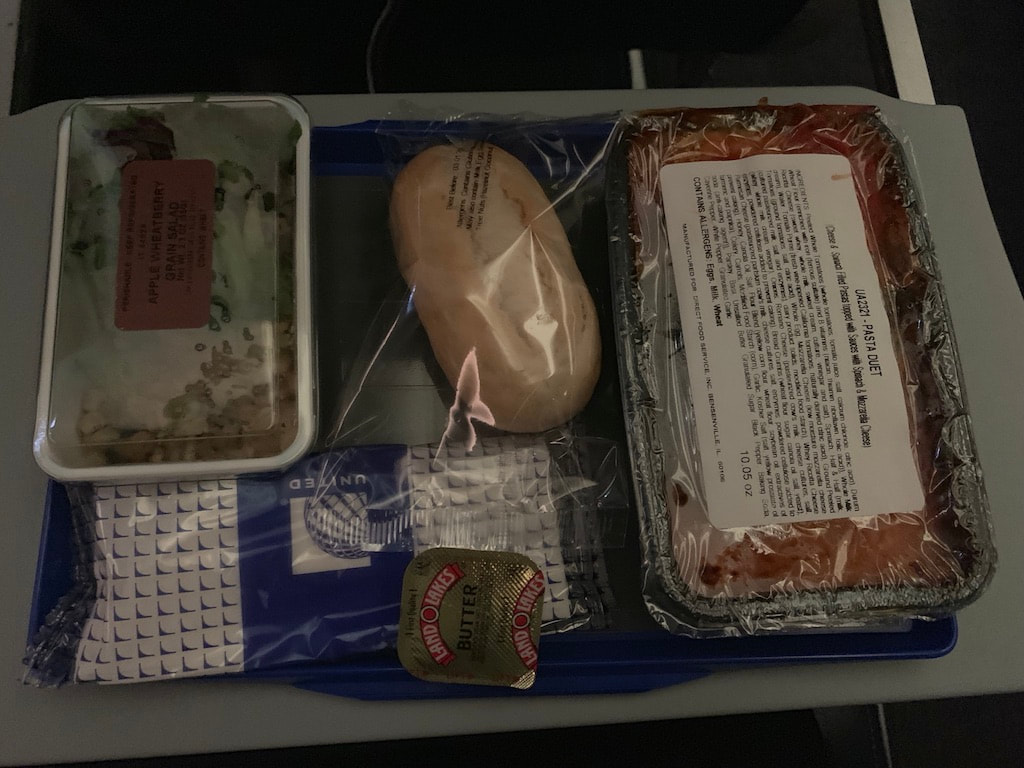 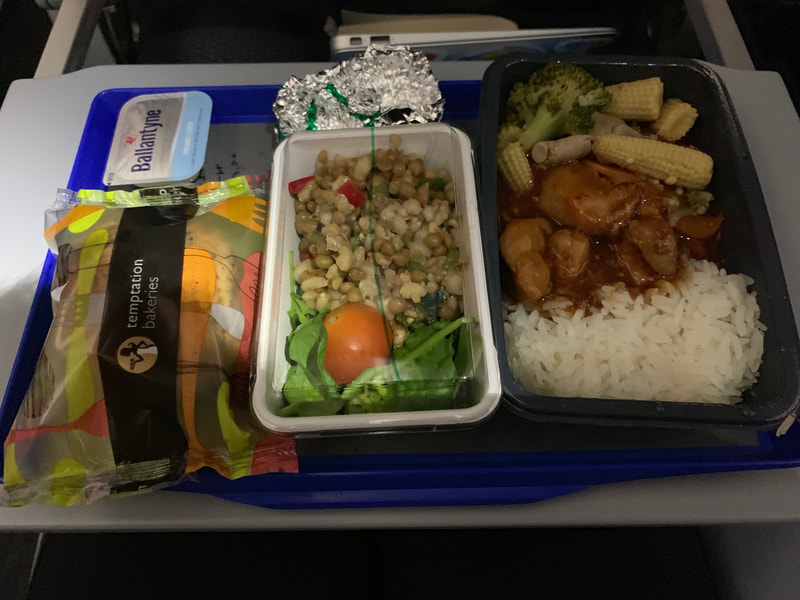 After that, the captain dimmed the lights for pretty much the rest of the flight (both ways). I took the time to study up on some flashcards and slept. It was rather uneventful, but I would say that the extra legroom and how there was no one in the middle seat helped. I thought United’s IFE system was very good which a lot of recent movies like Crazy Rich Asians. You shouldn’t have a problem keeping yourself entertained.

I also checked to see how much the Wi-Fi cost and it was absolutely astronomical. I didn't try it, but the cost is a little hard to swallow - and it probably isn't very fast at all. 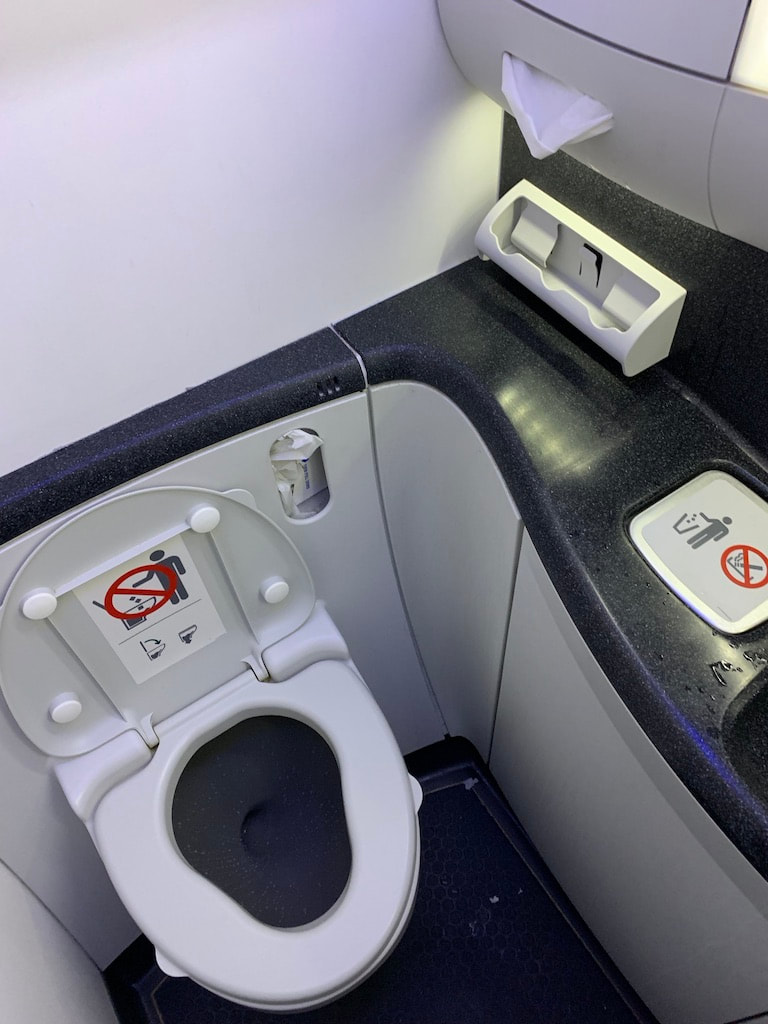 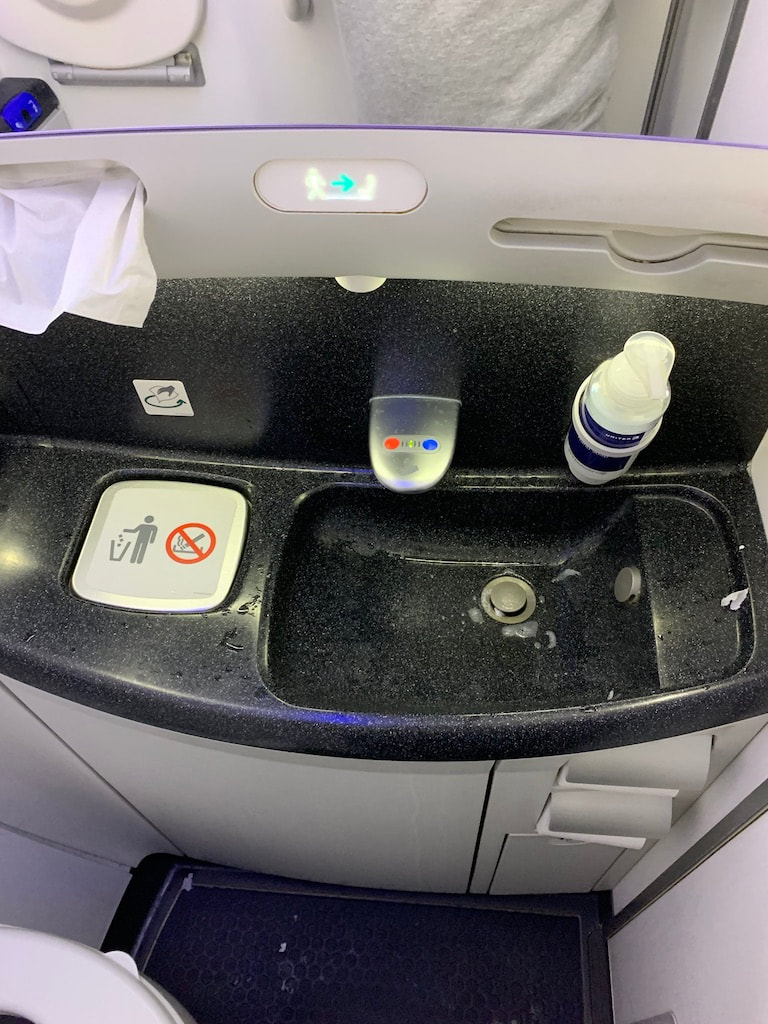 A few hours before landing, the captain turned on the lights and they began the breakfast meal service. They had a choice between (pancakes or French toast – outbound) and (pancakes and fresh fruit – return), and I chose the pancakes / fresh fruit. The pancakes came with some yogurt, fruit, and a small pastry. Again, nothing was spectacular but I did like the yogurt. I chose the fresh fruit on the return leg thinking it would be a little more - but it was literally just fruit. I should have known better because that made for a very unfulfilling breakfast. After the meal service, we started our descent which went relatively smoothly.

Overall, both flights exceeded my expectations. 16 hours on a United flight surprisingly flew by quickly and I wasn’t completely uncomfortable. I would say that the service was slightly above average. Overall, I would have wanted to go with an Asian carrier for such a long flight. However, my flight on United was so cheap that this particular flight had such great value – if United advertises more cheap fares with this aircraft to other destinations, I’ll be sure to book them. 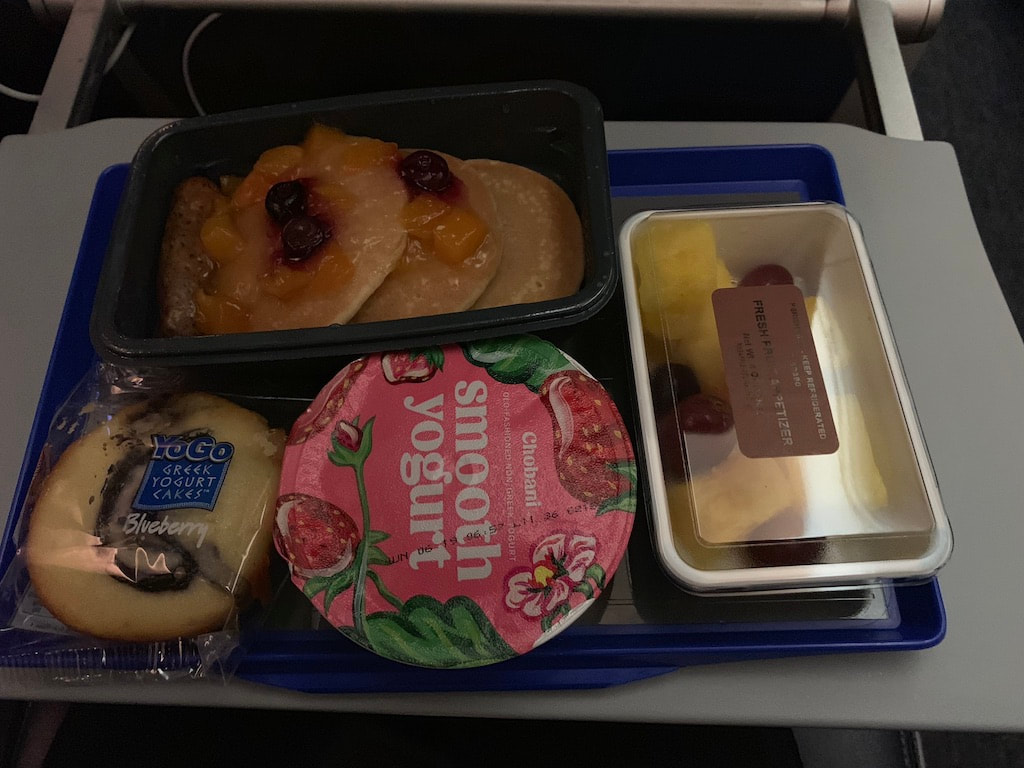 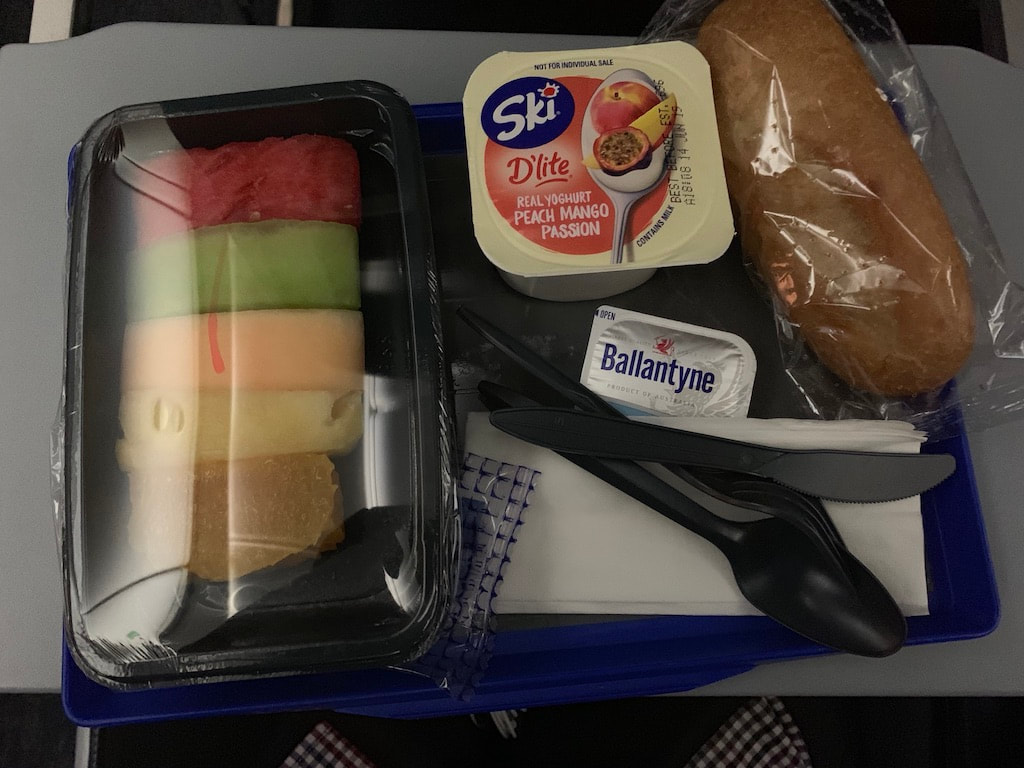